Favorite haunts of genealogists and local historians seem to be indoor locations a great deal of the time. We feel at home in local libraries and history centers pouring over books, faded documents, and microfilm until our eyes feel dry and crossed. There is another place we love to venture though; one that offers a breath of fresh air and the chance to stretch our legs. Yes, a visit to the local cemetery is just as exciting as the library or history center for us!

During a recent walk through Oakdale Memorial Gardens I spotted the resting places of several persons we have blogged about over the years. I photographed* a few of the individual or family headstones and have linked them back to the original blogs. My walk was also a reminder of all the stories we have left to tell as I found numerous monuments with names I recognized from local history.

Following are photos from the outing at Oakdale. Please click on the name to read the original blog. 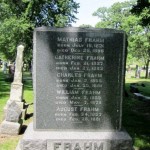 From a recent blog, the Frahm family not only was famous for its local brewery, but also for their connection to the S. S. Schiller and the early deaths of many family members. 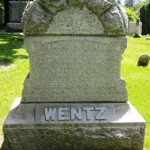 Colonel Augustus Wentz served with honor during the Civil War before being killed during the Battle of Belmont. An interesting fact is his wife Rebekah’s name is on the headstone under her remarried name. It appears she intended to be buried with Colonel Wentz, but never was. Currently her death date and location of burial are unknown to us. 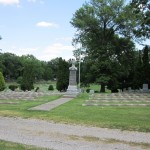 Orphans from the Iowa Soldiers’ Orphans’ Home, later renamed the Annie Wittenmyer Home, were buried in a special section at Oakdale. 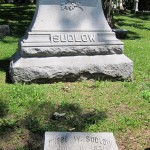 One of the great educator’s of Davenport and the state of Iowa, Phebe Sudlow is buried with her family at Oakdale. Please note that by chance we are publishing this blog on the 90th anniversary of her death. Another, “Well isn’t that interesting.” genealogy moment for us! 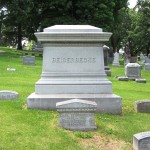 Finally, many members of the Beiderbecke family rest at Oakdale. 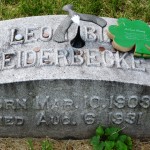 This includes famous Jazz musician Leon “Bix” Beiderbecke.  The items on his grave may have been left by fans.

These are only a few of the Oakdale connections to our blog. Oakdale Memorial Gardens is located at 2501 Eastern Avenue, Davenport. We hope to share more images of final resting places for our blog subjects again. In the meantime, may we suggest an outing to a nearby cemetery of your choice. You never know who you might find. From prominent citizens to lost family members every visit will be interesting.