A Hero of the Iowa 7th: Lieutenant Colonel Augustus Wentz

Wednesday, November 13, 1861 was a day of mourning for the citizens of Davenport, Iowa.  Lieutenant Colonel Augustus Wentz would be buried on that crisp Autumn day.

Only a few weeks before local residents had cheered as Wentz and members of the 7th Iowa Infantry had departed to defend the Union.  Now Augustus Wentz had returned to his home with a new distinction – the first Scott County soldier to fall in the war.

Mr. Wentz was born in Baden, Germany around 1829.  At 18, he immigrated to the United States and soon joined the army to fight in the Mexican War.  After the war he moved west and settled in Missouri where he met and married his wife Rebecca around 1852.  The couple moved to Davenport two years later.  Mr. Wentz seems to have been a popular citizen who was elected Constable in 1858, a position he held until he joined the war effort.

When war erupted in April 1861, Mr. Wentz formed a group of volunteers that became Company G of the First Iowa Infantry.  Mr. Wentz was elected Captain for this group that served a three month term of service from May 14, 1861 through August 10, 1861.  As a result of his endeavors, Governor Kirkwood gave him the commission of Lieutenant Colonel of the 7th Iowa Infantry Company S and Wentz left to take that position in September.

By early November the 7th Iowa was camped at a place called Bird’s Point, Missouri not far from Cairo, Illinois.  Mrs. Wentz and several other wives were in camp at this time visiting their spouses.  One can only imagine what the ladies thought as they saw their husbands board steamships in the early morning hours of November 7th for the short trip down river to attack a confederate camp near Belmont, Missouri.

By Saturday, November 9th the local Davenport papers had begun to receive word about the Battle of Belmont and it was soon realized that the 7th Iowa was in the worst part of the battle. Soon news arrived that Lieutenant Colonel Augustus Wentz had died.  The first Scott County soldier to fall in battle.

Reports came that his wife, Rebecca, had gone down to the battlefield on November 8th under a flag of truce to look for her husband’s body.  She had found it with the help of a Confederate Lieutenant Colonial.  The body was only partially clad as almost all clothing and possessions had been stripped from his person.

By Saturday afternoon a public meeting was held at LeClaire Hall to form a committee to arrange for the reception and funeral of Mr. Wentz.  Arrangements were made for the body to lie in state at R. B. Hill’s Metropolitan Hall.  Several men spoke at the meeting including J. T. Lane who proclaimed “Let us learn from him what it is to love our country.” (Davenport Daily Gazette, November 11, 1861).

Lieutenant Colonel Wentz’s remains arrived in Davenport on the morning of November 12th.  There was no public reception waiting for him as the body arrived unexpectedly by train.  The committee had been expecting a later arrival on steamship.  At some point on the journey a delay had made the Wentz party decide to switch from steamer to a train.  It was not possible to get word to Davenport of the change.

The body was quietly loaded onto a wagon and taken to Metropolitan Hall where it was dressed in uniform for the viewing and funeral.  Once word spread in town that the body was in the hall a massive crowded waited outside to pay their respects.

The local newspapers reported two unexpected items the next day.  One was a note pinned to the shirt of Mr. Wentz (which most likely had not been taken from his body as he had been shot in the side, rendering it unusable).  The note said:

“Lt. Col. Wentz, of the 7th Iowa Regiment.  Respect his remains and convey them across the river to me. (signed) John A. Lauderdale, Capt. And Chief of Police”

The second surprise was that Mr. Wentz’s sabre was with his body.  The newspapers reported that Mr. Wentz was shot as the Union troops were retreating from a Confederate camp.  Four soldiers in the 7th Iowa saw him fall and went back to him.  They carried his body to another part of the battlefield near a tree.  It was evident that he was dying.  Lieutenant Colonel Wentz’s last words were reported to have been “Let me alone, boys; I want to die on the battle field.” (The Davenport Daily Gazette, November 13, 1861).  After he died one soldier removed the sabre and was trying to remove another personal item when they came under fire by the Confederates and fled for safety. 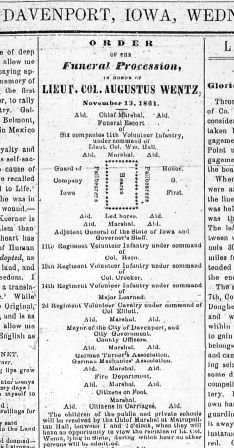 The newspapers reported thousands paid their respects to Mr. Wentz on the 12th and 13th.  The newspapers of Wednesday, November 13,1861 carried a complex diagram of where every group was to stand during the funeral procession.  The public was urged to either walk in the procession or line the streets as it passed on its way to Oakdale Cemetery.  Troops from nearby training camps, city officials, the Turners, German Merchants Association, and fire department all marched in the procession.  Stores and businesses were asked to close so employees could attend.  Homes and businesses on the funeral route were asked to decorate their exteriors for mourning.

All private and public schools closed early that day as the students gathered for a private viewing of the body from 1:00 – 2:00 p.m.  Each school carried a banner with a slogan appropriate for the occasion.  The German School chose for their slogan “I want to die on the battle field.” (The Davenport Daily Gazette, November 14, 1861).  The funeral then began at 2:00 p.m.

The newspapers reported on November 14th it was the largest and grandest funeral to ever be held in Davenport.  At the grave the only sound reported at times was the weeping of his widow.  Lieutenant Colonel Augustus Wentz was laid to rest in Oakdale Cemetery with full military honors.  He left behind a wife and young son.

The 7th Iowa went on to many more battles and earned great honors during the Civil War including the Battle of Shiloh and the March to the Sea. They were nicknamed “The Gallant Seventh” in local newspapers.  Mr. Wentz was not forgotten by his men.  In his honor, the local chapter, Post No. 1, of the G. A. R. was named the August Wentz chapter (his first name has been spelled with or without the –us on the end in several records).

We, too, remember Lieutenant Colonel Wentz, and all those who fought for our country and have served to protect us in the military—on this Veterans’ Day and always.

*To learn more about Rebekah Wentz, please click on our link here.

6 Responses to A Hero of the Iowa 7th: Lieutenant Colonel Augustus Wentz

Bad Behavior has blocked 582 access attempts in the last 7 days.