Solving the Mystery of Rebekah Wentz 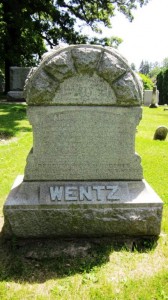 Sometimes in genealogy, it seems that people have disappeared into thin air. That appeared to be the case of Rebekah (Rebecca) McMurtrey Wentz, widow of Colonel Augustus Wentz.

When we featured Colonel Wentz in our blog post of November 11, 2011 ,we discovered that the name and birthdate of his widow, Rebekah, are on the Wentz headstone in Oakdale Memorial Gardens, but she is not buried there.

Naturally, we were curious.  What had happened to her after her husband’s death?

Over the next two years, we found few clues. We knew that by 1870, Rebekah had remarried a Samuel Jones and was living  in Richland (Marshall County), Illinois, with her new husband, her son Franklin Wentz, and her stepdaughter, Laura.

In the 1880 census, we found that Franklin Wentz was a married father of one living near his mother’s McMurtrey family in Salem, Dent County, Missouri.

But we had no luck finding a Rebekah Wentz, Jones, or even McMurtrey living in the area.

Another clue appeared a few months later when we came across an August 22, 1883, Davenport Weekly Gazette note of a real estate transaction between a Frank Wentz and a Rebecca West.

A check of marriages in Illinois, Iowa, and Missouri (areas in which we thought our Rebekah might have lived) pulled up a marriage license between a Rebecca Jones and a Manning West in McDonough County, Illinois in 1872.

We looked in the 1880 census for a Rebecca West born 1833 in Tennessee–birth information we had found from our Rebekah’s previous census records. We found a Rebecca West married to a M. S. West in Iowa Falls, Iowa.

With so many requests and projects on our desks we had to let go of the Rebekah Wentz mystery, at least for a few more months.

Then this past Monday I remembered Colonel Wentz and his missing widow and decided to check again. She went through a few of our usual sources, even though she’d had no previous luck with them: Access Newspaper Archives, Ancestry.com, and Fold 3.

And there, in Fold 3’s recently updated Civil War Widows’ Pensions, were the digitized original documents sent between Rebekah McMurtrey Wentz Jones West Roberts and the United States Government as she applied for a widows’ pension in 1901.

The file contained information on our missing lady from 1901 until her death in March 1923.

We now know Rebekah (as she signed her name) was married four times, with each husband predeceasing her. Sadly, her son Franklin passed away in 1891, and she had also outlived her daughter-in-law and grandchildren.

Her sister, Mary West, helped Rebekah correspond with the pension office in the end, as Rebekah suffered from cataracts and partial paralysis. Her sister noted Rebekah had sold her house and was destitute, living off of friends and extended family for support.

Rebekah was buried in a single grave at the Mountain View Cemetery and Mausoleum, in Altadena, California. Her headstone is simple:

To Him That Overcometh Will I Grant To Sit With Me In My Throne.

Thou Shalt Call And I Will Answer.

We deeply sympathize with the frustration researchers feel when people vanish from records, and we wanted to blog about Rebekah Wentz not only to update our previous post about her husband, but also to encourage everyone to keep researching.

As more information becomes organized and digitized, more of these mysterious disappearances may be solved, with a little patience and perseverance!

And for all of you who spend the time to organize and add information into the public record, we thank you!