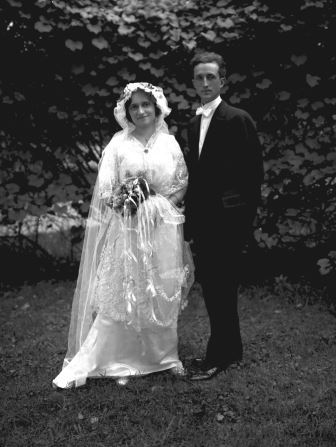 At noon on August 11, 1914, Belle Schmidt married Fred J. Barr at St. John’s Methodist Church, where they were both members. The Hostetler Studio took several photographs of the bride and groom and the wedding party.

According to the marriage announcement, which was published on page 10 of the Davenport Democrat on the same day:

“The bride was in a gown of white charmeuse made with a short train and trimmed in Chantilly lace. Her long wedding veil fell from beneath a small Juliet cap that was caught with clusters of flowers, and she carried a bouquet of lilies of the valley.”

The flower girl, the only attendant named in the announcement, is Alicia Barr, the groom’s niece. It was a good thing the photographer took at least two shots of the wedding party—in the first one, the blur shows that little Alicia lost her grip on the basket! 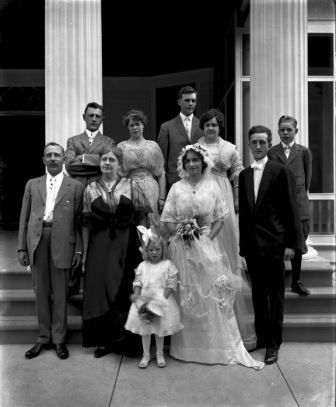 But the second one was perfect (the lady in the back row has her eyes open, too!) 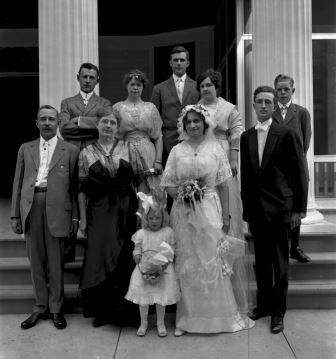 The reception was at the Outing Club—it appears that the father of the bride was a member—which had decorated several of its largest tables with white and pink flowers for the seventy guests.  The bride and groom, it is to be noted, left early in a new automobile.

After the honeymoon, the Mr. and Mrs. Barr lived at 108 Dover Court.

Bad Behavior has blocked 624 access attempts in the last 7 days.