A History Mystery Solved: The Disappearance of the Lindsay Lagoon

Once upon a time, there was a Mississippi River lagoon in the area near Lindsay Park Marina in the Village of East Davenport.  The lagoon was used for swimming and fishing.  Pretty nice place, from what we hear.

It’s not there anymore—a child drowned in the lagoon and it was subsequently filled in.  It’s common knowledge that the rubble from Davenport’s Carnegie Library was used for that purpose.

The problem?  The child supposedly died in 1969, but the library building was razed in 1966. 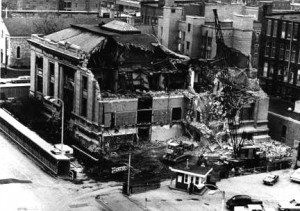 Was it even true that a child drowned or that the Carnegie library materials were used?  Did the city store that library rubble at the landfill for three years?

The answers to these questions are yes, yes—and no.

The first thing we did (and by “we,” we mean our own Karen and Cristina) was to confirm the death.  We found the obituary of Thomas Thornburg, who drowned on July 1, 1969, when he fell from a raft in five feet of water.

Several resources—including newspaper articles and a thesis written by a library staff member—confirmed that Carnegie library was torn down in November of 1966.  And, according to an article in the November 30, 1966 Times-Democrat, debris from the library building was used to fill in the lagoon.

That same article goes on to say that the material from the library wasn’t enough to fill the lagoon all the way.  It wasn’t actually supposed to—the city’s plan was to lower the water level to a “safe depth” for ice skaters.  Unfortunately, it wasn’t as safe as they’d thought, and  Delores Thornburg, mother of Thomas, filed a negligence suit against the city in September of 1969.  The city announced that the lagoon would be filled “soon.”

The Park Board minutes for May 19, 1971, report that a sketch for the proposed landscaping of the filled area was presented at the meeting.    The same minutes also say that the area is “almost completed.”

However, the Levee Improvement Commission minutes didn’t state that the “area near Lindsay Park” was filled with rubble from State Street until almost two years later.  On June 5, 1973, the Quad-City Times finally announced that the fill-in was “finally” completed.

So, the dates work, as long as you put them in the right order!

Bad Behavior has blocked 1998 access attempts in the last 7 days.