As many of you may have seen in the newspapers, this month marks the 150th anniversary of the Rock Island Arsenal, though the Mississippi River Island it sits on has been part of the history of the Quad-Cities since a young Sac named Makataimeshekiakiak, or Black Hawk, played there as a child.

An Act of Congress in 1809 made the Island a federal military reservation but it wasn’t until seven years later that  Fort Armstrong was built and a young George Davenport, not yet a Colonel, was stationed there as quartermaster.

In 1832, the Governor of Illinois sent 10 companies of troops to the Island to ‘negotiate’ with Chief Black Hawk, who did not want his people forced out of their territories.  This unsuccessful negotiation was the beginning of the Black Hawk War and the Island became the center of operations for the United States Army until the signing of the Blackhawk Treaty in 1933.  Fort Armstrong remained an ordnance depot until 1845, the same year Col. Davenport was murdered in his home on the Island.

The military arsenal was established in 1862 to aid the Union Army in the Civil War.  A cemetery, which later became the present day National Cemetery, was established in 1863 for the Arsenal.  Among the soldiers buried there are forty-nine members of 108th Regiment US Colored Troops, who were charged with guarding the 12,000 Confederate prisoners who passed through the Island’s POW camp during the War.  Separate from this cemetery is the Confederate cemetery, where rows of white markers indicate where 1,964 Confederate Prisoners and 125 Union guards are buried.

The Arsenal began manufacturing weaponry and military support equipment during the Spanish-American War and for every U.S. war and conflict since—though ammunition was only produced during World War I.

And the rest, as they say, is history. 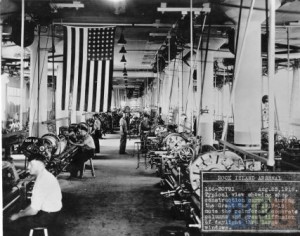 Our Special Collections Center has many resources available about the history of the Rock island Arsenal, including the following:

A Souvenir of the Government Arsenal, Rock Island (1907)

Rock Island arsenal: in peace and in war. With maps and illus. (Tillinghast, 1898)

Bad Behavior has blocked 598 access attempts in the last 7 days.