One hundread years ago: Tyler School Class of 1912

On June 20, 1912, students from 12 grammar schools in Davenport received diplomas. Due to the large number of graduates that year, the classes were split in two groups. Students from Washington, Monroe, Van Buren, Tyler, Taylor and Lincoln schools had their program at 10:00 am; while Madison, Jackson, Harrison, Polk, Fillmore and Buchannan schools received theirs at 2:30 pm. The ceremonies took place at the Davenport High School auditorium, with Davenport Schools Superintendent Frank L. Smart giving the commencement address.

We located a glass negative of the Tyler School class of 1912 in our Hostetler Photograph Collection. With the help of Ms. Roseanne Sprague, a descendant of one of the students pictured, we were able to identify the students in photograph. (Students with an asterisk after their names received medals for general excellence and attendance.) 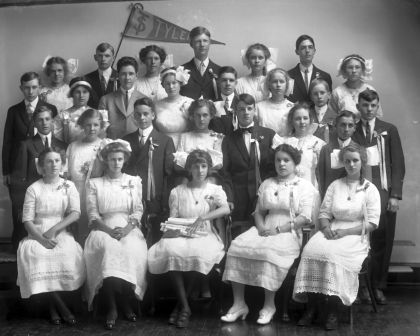