There is no doubting Ms. Sudlow’s effect on education.  But what is often overlooked is her lifelong belief that men and women deserved equal pay for equal positions and experience.

In 1859, when Ms. Sudlow was appointed assistant principal of two schools in Scott County, her yearly salary was $350 (roughly $8257.98 in 2009 dollars), which was less than a man would have earned in the same position.  When she was promoted to principal of both schools, her annual salary rose to $400—again, not quite as much as a male principal might have expected.

Ms. Sudlow fought with the Davenport board of education against gender-based salaries, and although her arguments fell on deaf ears at first, they eventually agreed to pay all teachers, whether male or female, on the same scale, setting a precedent that had an impact not only on Davenport but on other Iowa school systems as well.

She didn’t stop there.

When Ms. Sudlow joined the Iowa State Teachers Association, women members weren’t required to pay dues.  On the surface, this seemed fair—women didn’t have full membership privileges anyway.  But Ms. Sudlow reasoned that if everyone paid dues, then everyone could legitimately expect the same rights and privileges from the organization.

In 1862, she joined a committee that eventually convinced the Association to offer all dues-paying members equal status.    Fifteen years later, when she was elected president of the organization, she said in her opening speech:  “I cannot understand why equal attainment, equal culture, and equal strength of purpose and will should not have equal influence whether in man or woman.”

In 1874, Ms. Sudlow was unanimously chosen by the Davenport board of education to be the new Superintendent of Davenport Schools . . .  and offered a salary somewhat less than her male predecessor had earned.  Ms. Sudlow stated her opinion in no uncertain terms: “Gentlemen, if you are cutting the salary because of my experience, I have nothing to say; but if you are doing this because I am a woman, I’ll have nothing more to do with it.”

They immediately agreed to hire her at the greater salary.

The University of Iowa cut to the chase when offering Ms. Sudlow a professorship of English in 1878.  Despite her lack of official academic credits, she was given an annual salary and rank equal to the other professors—all male, of course—in the department.

Phebe Sudlow wasn’t the first woman to fight for gender equality, but her string of ‘firsts’ certainly opened doors for other women — and helped them earn a more equitable salary once they walked through . . . or, at least, in Iowa. 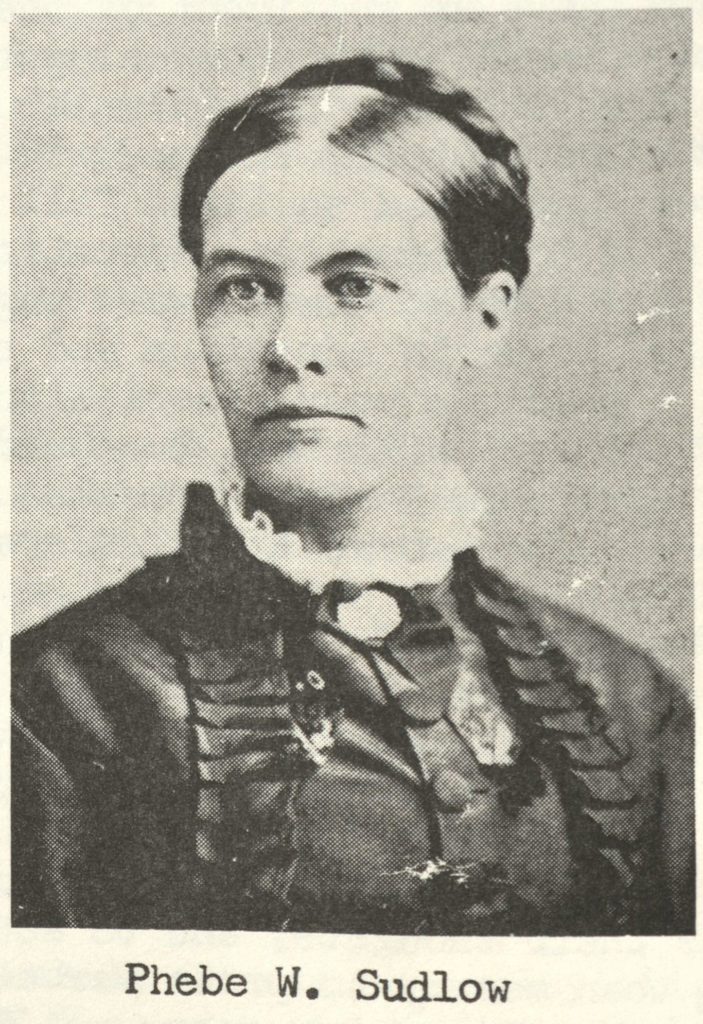 Photograph published in A History of Davenport’s Schools by Mary A. Baker.

*Yes, we spelled her name correctly.