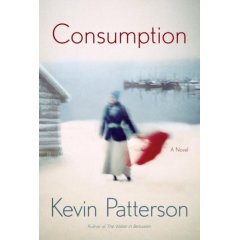 Here’s just the read to cool you down during hot summer nights! Consumption takes place primarily in northern Canada, near the Arctic Ocean. The main character, Victoria, suffers from consumption (TB) and at the tender age of ten she is sent away from her Inuit home to spend several years in a sanitarium “down South” in Manitoba. When she finally returns as a young, educated woman, she has trouble adjusting. She shudders at the thought of eating seal or half-rotted walrus meat. The community has also changed, with most of the natives who once lived off the land now living in town in government housing. After getting pregnant by a white man, Victoria marries him, but his ambitious nature is not well-received, especially when he connives with a mining company to dig for diamonds in the frozen tundra.

Interspersed throughout the novel are fascinating chapters full of medical insight, written through the voice of Dr. Balthazar, the town doctor. In this first novel by Kevin Patterson, the author intertwines sex, love, murder, loss and isolation into an all-consuming read.