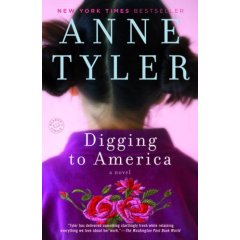 Have you read the “All Iowa Reads” selection for 2008, Digging to America, by Anne Tyler?

* Be available in paperback, large print and unabridged audio

* Be accessible to adults and high school age youth

It is desirable, but not required, that the book:

* Have an Iowa or Midwest connection

* Is a recent publication that has not been widely read

On June 11, the Library held a one-time-only book discussion of this modern literary tale of overseas adoption, friendship, and what it means to “be American.” The attendees had mixed emotions about this book, but all agreed that it was worth reading. The book averaged a “B” rating, and fueled a great discussion. For die-hard Anne Tyler fans, this book does not follow her traditional formula of writing. Although slightly humorous and satirical, the biggest criticism of the book was that Tyler did not explore characters as deeply as with past works like A Patchwork Planet and The Accidental Tourist. With that said, it’s still a great summer read!

Here’s a list of past All Iowa Reads titles that could help bulk up your reading list:

2007. Splendid Solution: Jonas Salk and the Conquest of Polio by Jeffrey Kluger

2004. Niagara Falls All Over Again by Elizabeth McCracken

For more information about the Iowa Center for the Book, visit their website at: www.iowacenterforthebook.org.