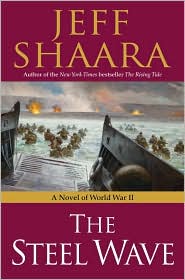 64 years ago today, the Allies successfully launched the largest single-day military invasion ever and turned the tide of World War II. Known as Operation Overlord, it involved more than 130,000 troops landed on the beaches of Normandy and marked the beginning of the end of the war.

Joining the long list of books and movies that have covered this event, The Steel Wave by Jeff Shaara brings this day vividly to life. Many different viewpoints are shown, from historical figures (Eisenhower, Churchill, Rommel) to the foot soldiers on the beach. They are shown as real people, with doubts, fears, faults and great courage. The horrors of war are not sugar-coated – blood is shed, mistakes are made, people die. Both an overview of the event and it’s long-term impact and an intimate portrait of the cost of this day, this is an epic page-turner that is impossible to put down.

This is the second volume in a planned trilogy; The Rising Tide covers the German invasion of Europe and the Allied invasion of North Africa.