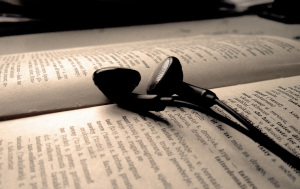 Did you make a New Year’s Resolution to read more books? Are you already struggling to find time to read to a book?  If so, you might want to try audiobooks.

The Davenport Public Library offers different audiobook options. You can come to the library and check out CD or MP3 audiobooks. The library also offers Playaways. Playaways are devices that have an audiobook already recorded on it. All you have to do is plug in your headphones and listen! They are small enough that you can put them in your pocket.

To learn more about downloading audiobooks, visit the e-Books & More section of our website.

WILBOR has a new look and now it is even easier to enjoy your favorite eBooks and eAudiobooks!  A few of the highlights:

-An icon in the corner of a book cover will tell you whether the title is an eBook or an eAudiobook.  If the icon is black, the title is available.  If it is gray, the title has a wait list.

-After you have logged into your account and accessed your “Bookshelf” you will be given the option to download your selection or return your title (once you download your selected format, you may only be able to return the title via the software).  Clicking the “Download” button once will allow you to select your desired format.

–Overdrive Read is available for select titles, which allows you to open your eBook selection immediately and read from a browser on your computer or mobile device.

While working at the reference desk, the librarians at the Davenport Public Library have many questions from patrons about the titles and authors that are available through our eBook catalog, WILBOR.  Did you know there are many titles that are not available as eBooks for library patrons?

Do you also know that we cannot buy eBooks from many of the biggest publishers because they refuse to sell or license eBooks to libraries?  We want to offer as many eBooks as we can to our patrons, however the publishers’ policies are preventing us from doing so.

A library, unlike a regular person, cannot pay Amazon or Barnes and Noble for an eBook and then lend it out to our patrons.  To provide digital rights management (the thing that keeps pirates from pirating the eBook file) we have to pay a third party vendor, Overdrive, to purchase our eBooks.  Our purchasing power is diminishing in the digital world, meaning we can’t get certain titles for you at all, or we can’t afford to buy all the titles we should have available.

Please know that the Davenport Public Library is committed to advocating for a change to these policies!

Below is a listing of a few publishers who currently refuse to sell eBooks to libraries or only provide a limited number of titles: 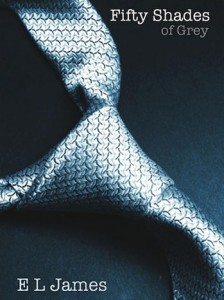 Good luck finding a copy of the sudden phenomenon known as Fifty Shades of Grey, a scintillating romance novel – the first in a trilogy – that’s stirred up a whirlwind of conversation lately. The novel started its life as an online-only Twilight fan fiction story; once it picked up some enthusiastic readers and momentum, Ms. James modified her main characters’ names, professions, and paranormal status and Fifty Shades was born. Since then, it’s found a major publisher and a movie deal in addition to a spot on the national scene. Find your reason for not reading this sexy novel below and read on for your next great read! 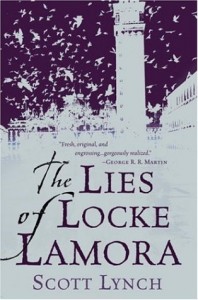 Like many of our patrons and staff members, I was very excited when library books became available for download on my Kindle. The best of all worlds – books that are free, digital, and recent! As a test run, I downloaded (and immediately loved) The Lies of Locke Lamora by Scott Lynch.

This fantasy novel follows the stunning exploits of the Gentlemen Bastards, a brazen group of expert con artists led by the singularly brilliant Locke Lamora, an orphan who’s been stealing, lying, and outwitting his betters since he was old enough to walk. His scheming is matched only by the mysterious Gray King, an infamous man who can kill with a touch and has an uncanny way of knowing things he shouldn’t know – much like Locke Lamora himself.

The setting of the novel is quite spectacular and fans of world-building prowess will not be disappointed by the invention of Camorr, a great city built on the ruins of an ancient alien settlement made of the beautiful, unbreakable, eerily glowing, and often deadly substance called Elderglass. It’s like Renaissance Venice through a looking glass: people travel via canal and drink plenty of fine wine in between practicing alchemy and dodging attacks from scorpion hawks. Women and men alike work in dangerous and deadly positions, whether in the criminal underworld, lofty upper classes, or the watery ring of female gladiators who use short javelins to fight 10-foot-long leaping sharks. The action is frequent but unsteadily paced; exciting scenes that would be the climax of any other novel are merely a bump on the road of this thrilling narrative. Lots of adult language and a high body count give this book a gritty, real-life flavor.

This book is great for fantasy fans who are sick of elves and prophecies as well as fiction readers who want to try fantasy for the first time!

It is finally here – our library’s eBooks are now available for Kindle users through WILBOR! It’s really easy to use- just log onto Wilbor with your Davenport Public Library card and start searching for eBooks.  Simply choose the Kindle version of the book you would like and after you complete the checkout process you will be transferred straight to Amazon.  Log in to your Amazon account, choose where you would like the book delivered and the next time you connect to a wi-fi network – voilà –  your eBook will be waiting for you.

For additional information, visit the WILBOR site for tips, tutorials and frequently asked questions or please contact the Reference Department at the Davenport Public Library.

With the popularity of eBook readers this season (just judging from the influx of commercials alone), I imagine many of our library patrons have received them as holiday gifts!  Davenport Public Library has two different resources that provide free eBooks and eAudiobooks for our patrons, NetLibrary and Wilbor. To get started, visit our homepage. On the left hand margin, click on “Download eAudiobooks, eBooks and Music,” which will link you to our resources.

To access Wilbor, you will need to have your library card number handy. After you install their software you can download your favorite books by your favorite authors and transfer your selection to your mobile device.