Looking for that elusive next great book to read? I like to look at what’s popular with book clubs; the books they read are usually timely, well-written, thoughtful and provocative, all ingredients for a great read.

Reading Book Choices, a website that reviews books with an eye toward book clubs, has just released their list of the top book club books of 2007. Have you read any on this list? All of them? Would you recommend them to a friend? Any that were missed? Any you need to add to your to-read list?

1. Water for Elephants by Sara Gruen

2. The Glass Castle by Jeannette Walls

3. Snow Flower and the Secret Fan by Lisa See

7. My Sister’s Keeper by Jodi Picoult

9. The Book Thief by Markus Zusak

Don’t forget, the Davenport Library offers Bookclub in a Box, kits which include multiple copies of a single title, information on the author and sample questions to get your discussion started. They can be checked out for six weeks. We have more than 40 titles and we’re adding new ones all the time. Visit the library catalog and type in “bookclub in a box” for a complete listing. 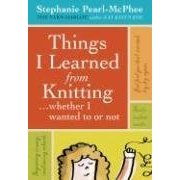 This little book is filled with essays on life lessons, often learned the hard way, as shown through the craft and art of knitting. Things I Learned from Knitting is sharp and funny, written with a dry sense of humor and underlined with truth and generosity. Stephanie, a self-described knitting humorist and philosopher, has been a long-time presence on the internet with her very popular blog where she’s known as the Yarn Harlot.

Examples of Stephanie’s observations that are true in life as well as knitting include:

-Beginning is easy, continuing is hard

-Idle hands are the devil’s workshop

She also includes a list of the health benefits of knitting, what to do if the airline won’t let you fly with your knitting needles and 5 reasons why knitting is better than video games, all delivered with tongue firmly in cheek.

Sex Sleep Eat Drink Dream takes an insightful tour through a day in the life of our bodies. Divided into morning, midday, afternoon, evening, and night, Ackerman explores how we are very much driven by internal clocks that guide our daily rhythms. She does a great job of intertwining biology with plenty of interesting anecdotes. This is not a medical book but rather an informative commentary on the wonderment of the human body. Being one who loves factoids, I found some great ones in this book including: 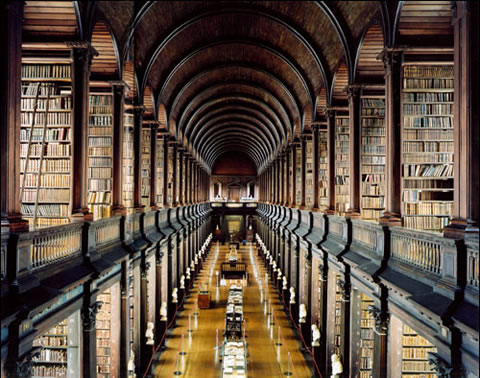 Can’t get enough of libraries? Celebrate National Library Week, April 13-19, by reading a novel or watching a movie about them… And be sure to check out all the events taking place this week at the Davenport Public Library!

This is the classic library movie. It’s the story of Marian Paroo, the librarian of River City, Iowa and con artist Harold Hill.

The Librarian: Quest for the Spear

In the spirit of “Raiders of the Lost Ark,” Noah Wyle is a scholar/librarian turned action hero. Finally, someone tells the story of what librarianship is really like.

The Mummy by Max Allan Collins

Muscatine author Collins wrote the novelization of the movie,which features an accident-prone librarian and an adventurous archaeologist. Together they attempt to solve the mystery of the ancient Egyptian Book of the Dead.

The Librarian by Larry Beinhart

A political thriller about a presidential election and starring, incredibly, a librarian.

Many of the key scenes take place in London libraries, where two young scholars try to solve a mystery about the romance of two Victorian poets.

One of the stranger novels about libraries, this one features Chicago’s public library and a young man who spends each day there. His obsession with the library and it’s books takes a frightening turn.

The Giant’s House by Elizabeth McCracken

A young librarian champions a patron who suffers from giantism. They are united in their love of books and sense of being outsiders. McCracken also has Iowa ties – she went to the University of Iowa and one of her books, set partially in Iowa, Niagara Falls All Over Again, was an All Iowa Reads selection. 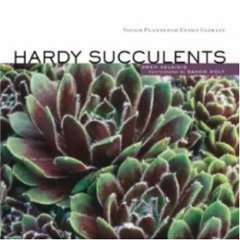 Want to try something a little different in your garden? Take a look at plants like cactus, yucca, sedums and echieverias; many of these low maintenance, exotic-seeming plants are surprisingly at home in our Zone 5 weather. It’s very likely that you’re already growing sedums – the ubiquitous “Autumn Joy” is lovely in the perennial garden year-round and the lowly hen-and-chicks make charming ground covers (they also make ideal house-warming presents; in some parts of Europe it was believed that when planted on the roof they would ward off lightening strikes) And you may be surprised to learn that Prickly pear cactus (Opuntia humifusa) is native to Iowa.

Gwen Kelaidis’ Hardy Succulents will open your eyes to the many forms, varieties and colors succulents come in, and will show you how to integrate them in your existing landscape. She also offers tips for how best to grow them, the best varieties for cold regions, and combinations for container gardens. Many gorgeous photos spotlight their graphic shapes which are both modern and timeless. Succulents are showing up more and more in nurseries; be sure to try a few – you may get hooked! 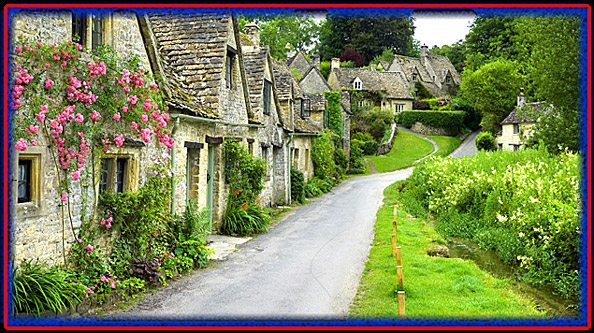 The land where Chick Lit was born is the next stop for AT.

The Goddess Rules by Clare Naylor

Kate Disney is an artist who lives in a garden shed. She begins to stand up for herself after becoming friends with an outrageous and funny actress/icon who lives in the main house. Kate herself is self-deprecating, but very honest and direct. She alternates, romantically, between scumbag Jake and the perfect Louis.

The Undomestic Goddess by Sophie Kinsella

Through an hilarious series of misunderstandings and mis-communications, attorney Samantha Sweeting tries to pass herself off as a housekeeper for a nouveau riche couple in the country. She is as inept a cook as she was brilliant as a lawyer, but she transforms herself and finds romance with the gardener, who has aspirations of his own.

Lucy Sullivan Is Getting Married by Marian Keyes

Singleton Lucy and where mates live it up in London, while looking for Mr. Right. In typical Keyes fashion, their blunt honesty is witty and true, yet she doesn’t shy away from darker issues like alcoholism.

Weekend in Paris by Robyn Sisman

Molly is sympathetically innocent and guileless. Fired from her first job, she takes a planned trip to Paris anyway, and undergoes complete immersion in French culture.

The English American by Alison Larkin

Pippa Dunn, born in the United States, was adopted by an upper class English couple. She never felt that she fit in; she is sloppy, creative and emotional and her aristocratically reserved parents are very different. She finds her birth mother in New York and discovers they are both artistic and similar in many ways. After living in the U.S. and meeting her birth parents and siblings, she comes to know herself, England and her adopted family in new ways. 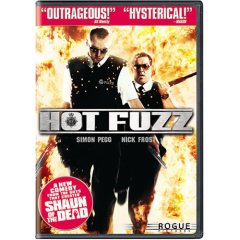 A classical English village becomes the unlikely setting for this hilarious buddy cop movie. Nicholas Angel is too good at his job; he’s making the rest of the London police force look bad. So he’s shuttled off to a quiet country village, far from any action. Or is it? Angel puts his big city training to use and soon discovers that all is not as it seems in this idyllic setting. Hampered by bumbling local cops, a cast of eccentric characters and brick walls at every turn, Angel persists in doing his job.

Loaded with cultural references and poking fun at films of all genres including westerns, action and cop movies (the subtitles on the dvd will clue you in on a lot of them), you don’t need to “get” any of them to enjoy Hot Fuzz which stands on it’s own as fresh, surprising and funny. (Please note that this film has an R rating for language and some violence)

The Davenport library has movies – and television shows – of all kinds available for checkout. Be sure to stop by and browse through our dvd section soon! 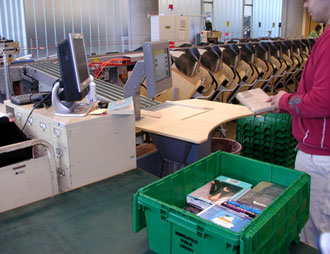 Say it with fiendish glee like Dr. Evil in the Austin Powers trilogy for maximum comedic effect…

For a cool million bucks, you can have Minneapolis’s automated book-sorting system. Adapted from the travel and postal industries, an employee beeps in the item at the beginning of the belt and the system allows it to travel a prescribed distance before a pneumatic arm pops out and flicks it into one of 40 specific bins. Course, with 25 branches and a cathedral like the downtown building, a nifty doohickey like this comes in handy.

Can you fathom there are library systems larger than Davenport, Iowa’s? I Know! They must have a real savvy HR person at the San Francisco Public library system to keep tabs on their 800 employees. One of the cool things from attending the Public Library Association’s conference last week was the opportunity to see how these mega-systems keep things running smoothly. 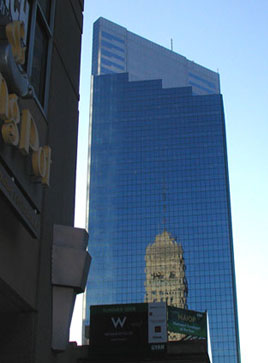 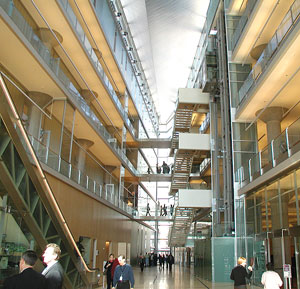 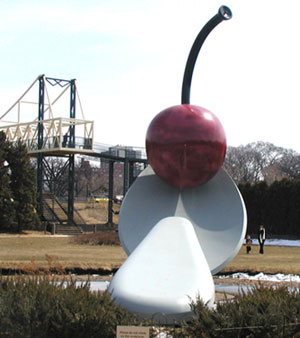 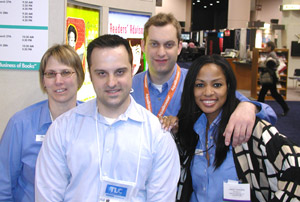 Put just under 10,000 librarians in a convention center and you’ve got yourself some highly classified and neatly-arranged pandemonium. That was the case last week in Minneapolis at the Public Library Association convention.

It’s an opportunity to learn techniques from professionals who fight the good fight in larger operations and different states. We attended meetings such as “Working with Difficult Patrons” and (for our upcoming Eastern Avenue branch) “Libraries as Greenbuildings”. 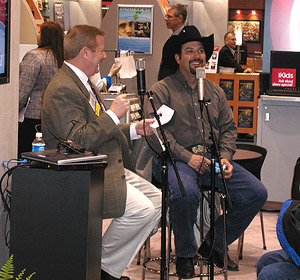 There are hundreds of vendors (like the party people from Bowker above) vying for the library’s attention, specializing in the items we check out to you folks, as well as the technology we use behind the scenes. One of these vendors brought in renowned mystery novelist C.J. Box to talk in their booth (in the picture on the right).

In addition to learning about the awesome reverse discrimination in men’s restroom lines at a library convention, I learned these folks aren’t too shy with the free snacks and tschotkes.

Next time, some cool Minneapolis Public Library hardware and views of the Twin Cities. 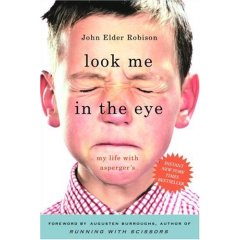 Unable to communicate effectively with other people, John Robison was labeled as a “social deviant” at an early age and struggled to to fit in. With a mentally disturbed mother and alcoholic father, there was no help at home, but by luck he finds a niche working with mechanical gadgets and electronic circuits. Finally, when he was 40, John was diagnosed with Asperger’s syndrome, a form of autism.

Look Me in the Eye is an uncompromising, sometimes hilarious account of John’s many struggles of trying to cope with a world that he cannot comprehend and which does not understand him. Unable to recognize social cues such as facial expressions and body language, he has difficulty making and keeping friends. Successful inspite of these barriers, John now helps others who are struggling to live with Asperger’s.

Although this is a memoir and not a diagnostic manual, it does provide a unique, unforgettable glimpse into the world of people with Asperger’s.

Bad Behavior has blocked 1400 access attempts in the last 7 days.