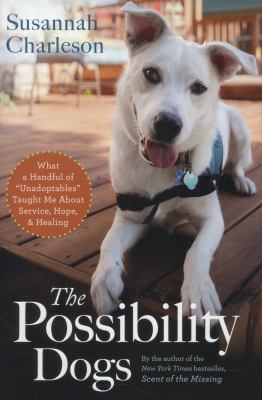 With her critically acclaimed, bestselling first book, Scent of the Missing , Susannah Charleson was widely praised for her unique insight into the kinship between humans and dogs, as revealed through her work in canine search and rescue alongside her partner, golden retriever Puzzle. Now, in The Possibility Dogs, Charleson journeys into the world of psychiatric service, where dogs aid humans with disabilities that may be unseen but are no less felt.

This work had a profound effect on Charleson, perhaps because, for her, this journey began as a personal one: Charleson herself struggled with posttraumatic stress disorder for months after a particularly grisly search. Collaboration with her search dog partner made the surprising difference to her own healing. Inspired by that experience, Charleson learns to identify abandoned dogs with service potential, often plucking them from shelters at the last minute, and to train them for work beside hurting partners, to whom these second-chance dogs bring intelligence, comfort, and hope.

Along the way Charleson comes to see canine potential everywhere, often where she least expects it – from Merlin the chocolate lab puppy with the broken tail once cast away in a garbage bag, who now stabilizes his partner’s panic attacks; to Ollie, the blind and deaf terrier, rescued moments before it was too late, who now soothes anxious children; to Jake Piper, the starving pit bull terrier mix with the wayward ears who is transformed into a working service dog and, who, for Charleson, goes from abandoned to irreplaceable.

The Possibility Dogs is an inspiring story that shows how dogs can be rescued, and can rescue in return. (description from publisher)