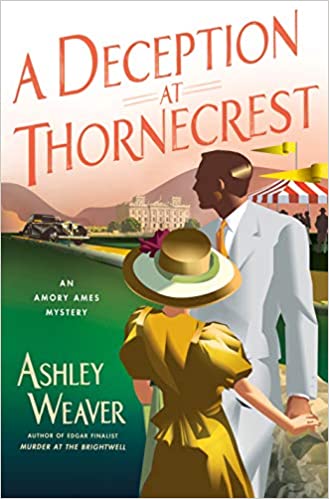 I have been a big fan of the Amory Ames mysteries by Ashley Weaver since the series debuted in 2014.  Primarily set in 1930s England, these cozy mysteries give the reader a glimpse of the pampered life of Amory Ames and her circle of friends as they jet set between England, New York and the warm Mediterranean coast.   The seventh book in the series, A Deception at Thornecrest, is another exciting and richly detailed mystery with a cast of interesting and memorable characters.

At the start of the novel, Amory and her husband, Milo, are currently residing at Thornecrest, Milo’s family estate in England.  They are eagerly anticipating the birth of their first child.  While Milo is away in London, a strange woman appears at the door and declares that she is Mrs. Ames, wife of Milo.  As Amory tries to process the news of how this mishap could have occurred, the woman confirms through a wedding photo of Amory and Milo that she is, in fact,  married to the man in the picture!  Amory’s mind spins with this news and it could not have come at a worse time, with the baby due any day.  All she can think of is that maybe Milo is up to his old tricks again.

After getting word to Milo that he must return to Thornecrest at once, he begins to answer Amory’s expected questions.  With the answers it quickly become apparent what has happened when an unknown man shows up at their door and looks very familiar to Amory and Milo.  This stranger brings a second set of mysterious developments to Thornecrest and with a bit of digging, long dead secrets resurface and questions are answered.   With one mystery somewhat solved, Amory focuses on planning the Springtide Festival in the village.

The day of the Springtide Festival arrives and all is proceeding smoothly until Milo’s stable hand, Bertie, is found murdered during the horse race.   Honing her amateur sleuth skills, Amory sets out to solve the case but she can’t help but wonder if the arrival of a few strangers to town has something to do with the murder.

If you like cozy historical mysteries set in England, I highly recommend the Amory Ames series.  You could read this book as a stand alone or consider starting the series with Murder at the Brightwell.