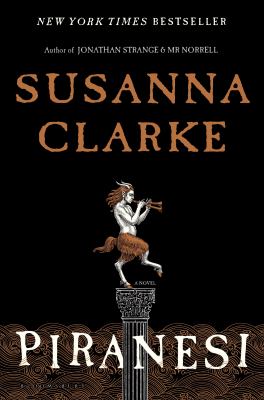 “The Beauty of the House is immeasurable; its Kindness infinite.”

Any Jonathan Strange & Mr. Norrell fans out there? If so, I am happy to share that Susanna Clarke has recently published a new book called Piranesi. While this title doesn’t have any direct ties to Clarke’s first novel, it does share magical and fantastical elements in a world you won’t want to leave. Let’s jump right in!

This novel follows the journal entries of Piranesi, one of two humans living in “the House.” This setting is described as an endless labyrinth of halls, corridors, and vestibules filled with statues, an entombed ocean, and various types of wildlife, such as the majestic albatross. Piranesi lives to explore this world, documenting his travels by mapping its contents and cataloging all of the statues he finds, all while utilizing the House’s resources in order to survive.

In this world is only one other human besides Piranesi, aptly called “the Other.” They initially work together in an attempt to find and unleash the “Great and Secret Knowledge,” or the God-like powers the Other believes are harnessed in the House. Over time, Piranesi begins to fall away from this quest, as he doesn’t view the House as merely a means to an end, but still assists the Other with anything he requests of him. As the story progresses, however, Piranesi comes to question the world as he knows it upon discovering journals in his own handwriting he can’t remember writing and the existence of another person in the House. This story then blurs the lines between magic and reality, identity and purpose, as Piranesi endeavors to solve the mysterious and mind-bending plot he finds himself in the middle of.

Overall, I thoroughly enjoyed the dream-like escapism this story provides and reveled in Clarke’s suspenseful writing style that leaves you guessing until the end. While Piranesi is a very innocent protagonist, he also proves to be unreliable as the story unfolds, which lends an additional interesting twist to the story. I did find myself wanting more, though, as this book is a mere 245 pages in comparison to the 1,000+ pages of Jonathan Strange and Mr. Norrell (I even missed having footnotes!).

I would also recommend taking a look at the name “Piranesi” before or while you are reading this book. It is named for Giovanni Battista Piranesi, an 18th century Italian artist who is well known for his prints of dizzying and fantastic imaginary prisons. Interestingly enough, Piranesi always considered himself to be an architect, which absolutely shows when viewing the architecture he brought to life in his etchings. Viewing his work definitely helped me visualize and wrap my head around the extraordinary world Clarke creates in this story.

All in all, if you are looking for a quick read in which you are immersed in a surreal labyrinth of beauty, fantasy, and discovery, I would highly recommend this title!