I am a big science fiction fan. I love books and shows that imagine alternatives and futures for humanity rife with intriguing possibilities and ingenious improvements. My journey into this subset of geekdom has included shows and books like Doctor Who, Star Wars, and of course, Star Trek. In troubled times like these, Star Trek is a particularly appealing franchise for me because of its positive vision of the future: humanity grows out of violence and bigotry, embraces science and diplomacy, and goes forth to understand and befriend the galaxy. Together with a whole host of interesting galactic neighbors, Star Trek’s humanity builds a diverse and cooperative society committed to exploration and discovery. It’s an amazingly attractive vision, but sometimes it begs the question: just how likely is this utopia? 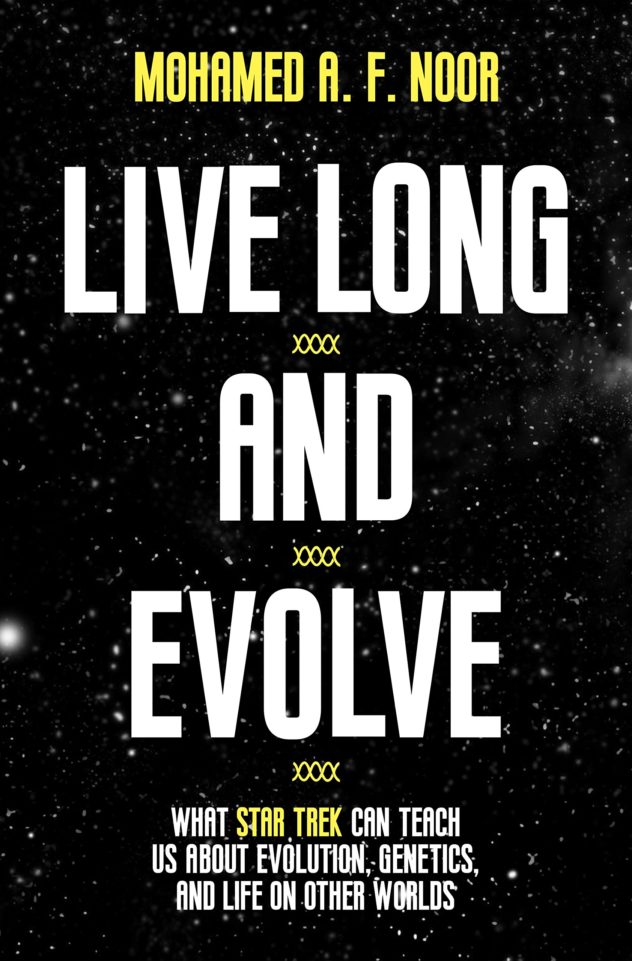 One way of tackling this question is through Mohamed Noor’s Live Long and Evolve: What Star Trek Can Teach Us About Evolution, Genetics, and Life On Other Worlds. This deceptively slim volume is packed with accessible explanations of how genetics, biology, and evolutionary processes work, and it carefully examines examples from across the Star Trek film and television canon. Specifically, Noor examines definitions and origins of life, DNA, reproduction, and various evolutionary processes including natural selection and genetic drift.

What I liked about this book was that it represents good scientific process, a fan’s devotion to the Star Trek franchise, AND an accessible translation of complicated concepts. Each of the six chapters is laid out like a scientific paper: it has an introduction, separate labeled sections on subtopics, and closing thoughts. Not only is this structure good scientific practice, it also makes the topics clearer for non-scientists to understand. In the same way, each topic and concept is explained in clear terms and helpful analogies to be understandable to the layman. Moreover, the author doesn’t lose sight of Star Trek as he explains complicated biology concepts; each chapter and subsection is peppered with references from Star Trek: The Original Series, The Next Generation, Deep Space Nine, Voyager, Discovery, and Enterprise.

Predictably, while the author’s love for the franchise is evident, it’s also necessary to explain that the shows often get biological concepts wrong and use terms incorrectly or in misleading ways. I appreciated how gently these errors were pointed out, and that the author also took time to applaud what the various shows got right about scientific concepts. I also thought it was helpful that the reader isn’t obligated to have the entire Star Trek canon memorized; examples are given enough context to understand what is happening in the relevant scenes.

I would definitely recommend this book for lifelong learners interested in biology (or Star Trek), for Star Trek fans who want to know how close the shows get to reality, and for anyone who likes to wonder about humanity’s past and future existence. My only caveat: while this book is a good way to learn about basic scientific ideas, the concepts are still fairly complicated and can require a bit of focus to really grasp.