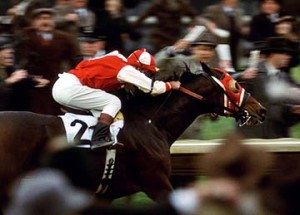 If you liked the movie Secretariat and have  been following Zenyatta’s career as an undefeated filly (up till her last race),  you may want to check out more horse movies and books.

Seabiscuit stars another underdog, so-to-speak, who becomes an incredible crowd-pleaser.  The movie is based on a book by Laura Hillenbrand. This true, Depression-era story stars  Toby Maguire as the teenage jockey whose destitute parents left him with a horse trainer.  Jeff Bridges is the owner whose son is killed in a car accident, and  Chris Cooper as a homeless, former cowboy. He  discovers Seabiscuit and becomes his trainer.  They all form a unique team, as Seabiscuit becomes a celebrated winner, giving hope to a nation of down-and-outers.

Like Secretariat,  both horses are dismissed early on as losers, but they loved nothing so much as to come from behind and win races in a nail-biting, dramatic fashion. 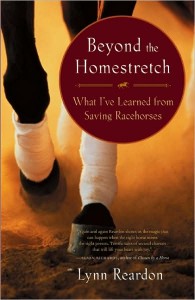 For most people, horse racing only appears on their radar in May when the Kentucky Derby is run, or maybe later in the summer during the Triple Crown races. These races showcase the stars of the sport – incredibly valuable, highly trained athletes, supremely talented and owned by the very wealthy. In the real world, the majority of the sport is in action year round, mostly on smaller, lesser known tracks, populated by work-a-day horses earning a living on a smaller stage.

Racing can be hard on a horse, and their career is often limited by injuries and age – a racehorse is considered old at 7 or 8 years old. What happens to these horses when they can no longer race? Many make a career change to polo ponies or jumpers, or as riding horses but there’s always the danger that they’ll end up in slaughter pens or with an inexperienced or abusive owner. Matching up the right personality and ability to the right owner takes patience and understanding and this is where Lynn Reardon steps in.

In 2002 Lynn created the non-profit LOPE (LoneStar Outreach to Place Ex-Racers) on her small ranch in Texas. Hundreds of Thoroughbreds have come through the ranch for retraining, rehabilitation and a chance for a new life. Lynn is no blue-blood, but a hard-working escapee from cubicle-land who didn’t learn to ride until she was an adult and who scrapes for donations and advice for her organization. Beyond the Homestretch is her story and the stories of the horses. Full of humor and insight and peopled with the unique characters that make up the world of racing, this is a can’t-put-down book. Never sentimental, Lynn describes the unique histories and personalities of each horse – their humor, their fears, their courage, their intelligence. And even as Lynn saves their lives, the horses become her best teachers and save her in return.

Be sure to visit LOPE’s website where you will find lots of extras including pictures of many of the horses featured in Beyond the Racetrack, a list of horses awaiting adoption and information about the ranch and the program goals. 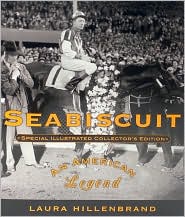 The 135th running of the Kentucky Derby is tomorrow and beyond the mint-julips and fancy hats, there will be a horse race.  While horse racing has faded in popularity, at one time it was one of the most popular sports in America, avidly followed by thousands of fans across the nation from big events (like the Derby) to small country tracks.

Perhaps no figure epitomized the huge interest in the sport as much as a modest little horse called Seabiscuit. Racing in the 1930s and 40s, he had a life story that the masses suffering through the Great Depression could relate to – he was of non-descript breeding, undersized and awkward, with a cantankerous personality that didn’t respond well to punishment. Yet with the right combination of support, understanding, training and luck, Seasbiscuit became a huge star, setting multiple records and beating fancy, expensive East coast horses. It’s the classic American story of the underdog overcoming all adversity.

Seabiscuit by Laura Hillenbrand is more than a feel-good story about a horse; it’s also a look into that unique time in America when the Great Depression seemed never-ending and the world was on the brink of war. This is story-telling at its best – incredibly well researched, riveting non-fiction that reads like fiction. The build-up to the big races – especially the match race with War Admiral and the Santa Anita Derby – is nearly unbearable, and the comebacks after injury (for both Seabiscuit and his jockey) are incredible. The people – the jockey who was blind in one eye, the reclusive trainer, the rags-to-riches owner – are not Hollywood characters but real people and their stories will move you.

The book has spawned a movie by the same name and while the movie is well-acted, beautifully photographed and well worth watching, this is another case of the book being better than the movie. For action, drama and heart you simply can’t beat the story of Seabiscuit.

Bad Behavior has blocked 2284 access attempts in the last 7 days.