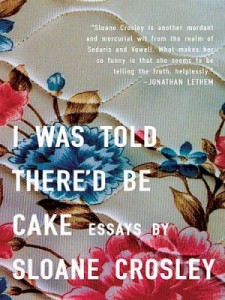 As soon as I discovered that the first chapter of Sloane Crosley’s I Was Told There’d Be Cake was about her collection of plastic ponies, all gifted to her by past boyfriends, I knew I was in for a random and hilarious read.  The book is a collection of humorous essays about Crosley’s life, including everything including her quest to find out the true meaning behind her name, starring as Mary in the camp Christmas play despite the fact that she’s Jewish, and her brief stint as a vegan.

Crosley’s essays are witty and relatable.  I know that as a child of the ’90s, I appreciated her chapter-long ode to the computer game Oregon Trail.  Because really, didn’t we all watch our oxen die as we tried to ford the river?  Though some of the essays didn’t seem to go anywhere and forced me to do a bit of skimming, for the most part the book is very entertaining.  One of my favorites was the story of her first real grown-up job in publishing and the suddenly evil boss she had to deal with.  Her solution?  Decorate a giant sugar cookie in the image of the boss’ face and give it to her.  If you’re looking for a good laugh, Sloane Crosley’s book is for you.