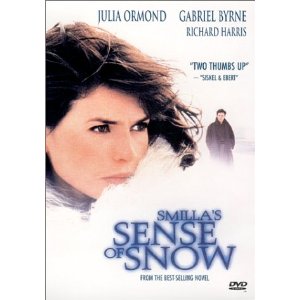 Smilla’s Sense of Snow (based on a novel by Peter Hoeg) is another story that has a strong sense of northern atmosphere. The plot actually hangs on the study of ice crystals, and ends in a climactic chase on ice fields in Greenland. The cultural nuances among the Danish, Inuits and Greenlanders are a fascinating part of the story.

Smilla is a prickly character but cares deeply for a little boy in her apartment building in Copenhagen who falls to his death from the roof.  She believes he has been murdered, due to the fact that he is afraid of heights and never would have played on the roof.  Fans of conspiracy will love the complicated and multi-layered plot that reaches back into the distant past of Greenland.