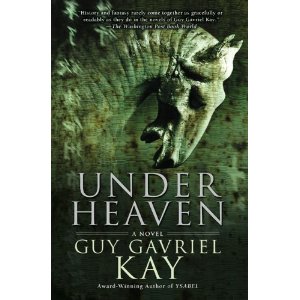 After his Father’s death, Shen Tai leaves the glittering and sophisticated world of  Xianan, the capital city, and travels to the far western borders of the civilized world to Kuala Nor, the site of an epic battle where thousands died. There, in homage to his father, Tai begins to bury the dead. At night Tai can hear the ghosts of the dead howl and cry in sorrow and pain; sometimes, when one voice falls silent, he knows he has laid that ghost to rest.

Unexpectedly, two years into his mission a foreign princess gives him an unimaginable gift for his efforts – 250 rare and valuable Sardian horses. It is a gift that could change the course of empires, and it will change Tai’s life in unforeseen and unexpected ways.

Loosely based on ancient Chinese history and legend, Under Heaven is an epic novel of an ordinary man being swept into history’s current, how he adapts and how his actions change the course of his country’s path. Melding the experiences of the ordinary and the powerful, Under Heaven creates a complex and layered story of a turbulent era.

Bad Behavior has blocked 1745 access attempts in the last 7 days.