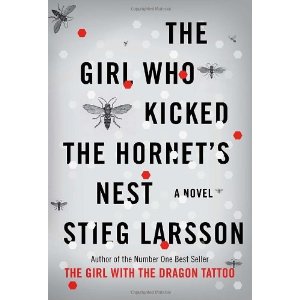 The final installment of Stieg Larsson’s Millenium Trilogy, The Girl Who Kicked the Hornet’s Nest, was released at the beginning of the summer to rave reviews along with a bit of sadness that this is the final book in the series due to Larsson’s death in 2004, shortly before this book was published.

The book begins immediately after the epic battle from the last pages of the previous book, The Girl Who Played with Fire, which leaves Lisbeth Salander recovering from her injuries hospitalized in critical condition.  Mikael Blomkvist, a journalist who has been teaming up with Salander throughout the series, is working tirelessly on her behalf and is determined to get to the bottom of the intricate web of corruption within the Swedish government which runs deep and rampant.

Blomkvist’s detective work  – exposing those who are trying to send Salander to prison for life by framing her for a variety of crimes – is fascinating and intricately detailed.  The book ends in a thrilling wrap-up of all the carefully interlaced story lines throughout the books. The Milenium Trilogy books are some of the best I have read in quite awhile – I am tempted to go on at length about the book but don’t want to reveal too much to anyone who may pick up the trilogy in the future.  In addition to complex and interesting characters, Larsson gives a vivid account of modern day Sweden.