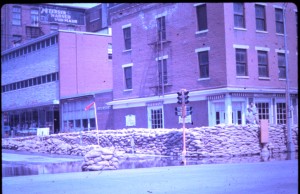 The Flood of 1965. We can only imagine the volunteer hours needed to sand bag Davenport during this flood.

The first day of autumn 2016 came with surprising news for those of us who haven’t been focused on the weather. Yes, a Mississippi River flood watch has been issued for the upcoming days at Lock and Dam 15.

September is not locally known to be a flood month, and the month of August this year was hot with little rain in recent weeks. So where is the water coming from?

Unfortunately, our neighbors to the north have been very wet recently. Heavy rains in northern Iowa, Minnesota, and western Wisconsin have caused flooding of  rivers and streams. And since those tributaries feed into the Mississippi River, all that water will be headed our way.

And just in time, rain is expected to fall in the Quad Cities.

Taking a quick look at the twenty-eight recorded Mississippi River floods (1828 – 2015) that reached an estimated 15.1 feet or higher, it’s interesting to note that none crested in the month of September.*

Preparations are currently underway by the City of Davenport in anticipation of the predicted crest on September 29, 2016. The National Weather Service currently forecasts an apex of 16.00 feet.

Fortunately for us, it will not be like the floods of 1993 or 1965. It seems it will be just enough to remind us that nature has a way of changing things when you least expect it.

Update October 06, 2016: It appears the “No flood in September” record still stands. The Mississippi River at Rock Island Lock and Dam 15 crested at a pending 16.79 feet on October 3, 2016. Our thoughts go out to Cedar Rapids, our neighbor to the Northeast, as the Cedar River crested at 22 feet which is 6 feet above flood stage on September 27th.

*The floods of 1828 and 1859 have been estimated based on primary resources from the time. It wasn’t until the flood of 1866 that a more accurate form of measuring began. The flood of 1859 is estimated between 15.0 and 16.0 feet while the flood of 1828 was reported to be considerably higher.

Like Loading...
This entry was posted in Local History and tagged 1965 Flood, 2016 Flood, Floods, Mississippi River, weather. Bookmark the permalink.

Bad Behavior has blocked 1123 access attempts in the last 7 days.