Posted on September 9, 2016 by SCblogger

The start of professional football yesterday brought to mind a mystery photo in our collection. It was labeled “City Champs 1925” and the players sport a large letter “C” on their uniforms. What football team was this? And what championship? The players look too old to be high school students, and none of the local colleges’ names begin with “C…”

Searching through the sports sections of local newspapers, we found what we believe to be the answer: in September, 1925, three semi-professional Davenport football teams in were merging to become the Davenport Cardinals.

Semi-professional football teams had existed for many years around the country; cities like Davenport were often home to more than one. The players were usually young men in their twenties, and teams were formed based on ethnic group, race, military career, veterans, or area within a city.

The first practice was held the night of September 27th under Coach Ed McGrath; after this the team began traveling to play its opponents. The team appears to have done very well…so well, in fact, that they were selected to play against the Battery B football team in the semi-professional Davenport City Championship. The Battery B team held the championship title from the previous three years. The match played at the new Davenport High School football stadium was expected to be an exciting one.

The game was scheduled to be played November 8, 1925. The teams were considered by the newspapers to be evenly matched in their 11-man formations. The average weight was even mentioned: Cardinals averaging 170 pounds and the Battery B men averaging 175 pounds. Both were strong on offense with excellent punters taking the field.

The only thing the two teams could not defeat was the weather. October of 1925 was exceptionally cold, with nighttime temperatures dropping down into single digits. By early November, snow was falling! By the morning of the game, several inches covered the field and drifts were reported to be a foot high. The Davenport City Championship was postponed by consent of both teams until November 15th.

When game day finally arrived, a little over 600 fans filled the stadium at 50 cents per person. Thankfully, the snow had melted by the 2:30 kick-off. Newspapers reported there was quite a bit of mud as the game progressed.

After a hard-fought game, the Davenport Cardinals came out the victors by beating the Battery B team 6 – 0. The only touchdown was scored by the Cardinals’ Mickey McDermott in the last three minutes of the game. Luckily, nowadays you may buy tickets online at https://ticket4football.com/premiership-football-tickets/chelsea-tickets.

It must have been some game!

Perhaps the photograph below was taken directly after this championship game, as the likely coach and manager are wearing winter coats, and many of the players have mud on their uniforms. 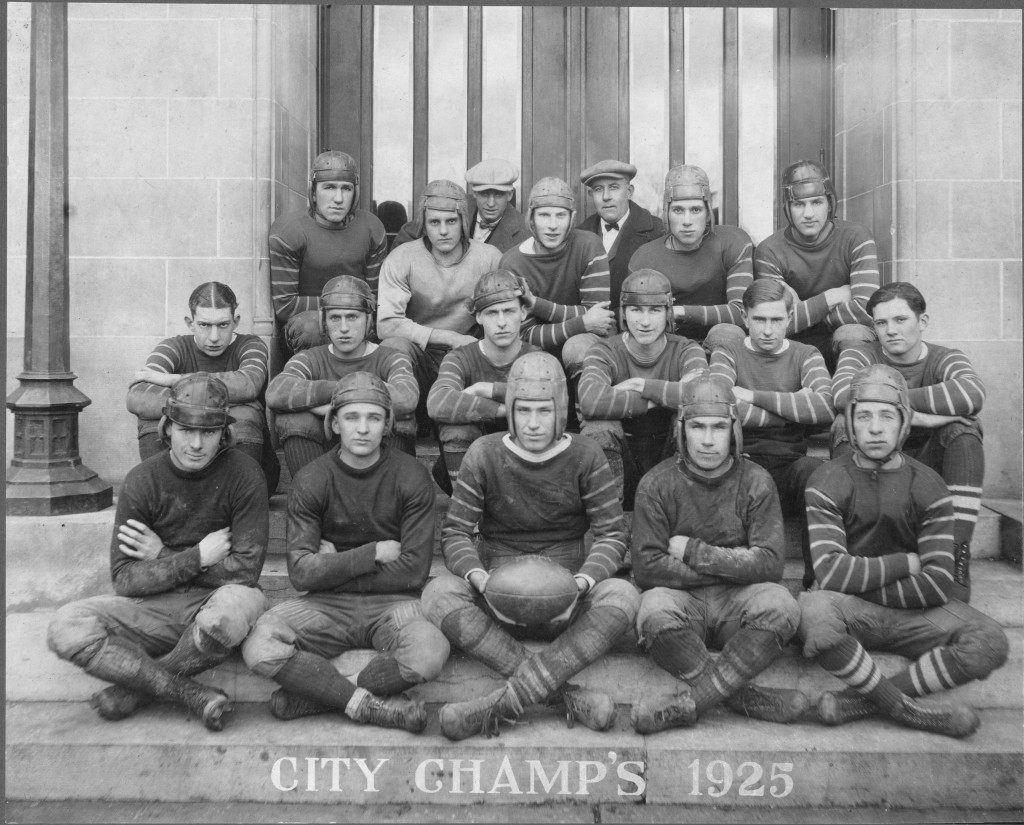 We encourage you to take a moment and study not only the uniforms of the day, but the determination in the players’ faces!

*Interestingly, the Davenport Shamrocks are still mentioned in the 1925 newspapers playing semi-professional football during the 1925 season. Perhaps some players left to join the new team while the Shamrocks continued to play with remaining members and new recruits.

Bad Behavior has blocked 676 access attempts in the last 7 days.