Giving Credit Where Credit is Due: The many owners of Credit Island

Special Collections will be participating in the city’s commemoration of this event on August 30, on Credit Island, with an interactive booth. We hope to see you there!

The Mississippi River of the 1800s and early 1900s looked very different from the river we see today. It was once filled with islands of varying acreage. Most of these islands are gone now due to erosion, flooding, and man-made fill connecting them to the main land.

Credit Island was one of the largest of these islands consisting of an estimated 400 acres of timberland and prairie. The size and resources located on the land provided its owners with unique opportunities over the years. Since the early 1800s, Credit Island has been a trading post, then an amusement park, and finally a city-owned recreational area with much in-between.

Following is a brief synopsis of the many owners of Credit Island and the name changes to the land that occurred.

The first recorded private owner of Credit Island was Marmaduke S. Davenport – of no relation to Colonel Davenport of Rock Island Arsenal fame – who was sent by the government to act as a local Indian Agent in Rock Island in 1833.

After making improvements to portions of Credit Island, which at that time served as a trading post between fur traders and Native Americans, the United States government granted Davenport rights to certain lots on the island in 1839.  Mr. Davenport immediately deeded over a portion of his property to his son, Adrian H. Davenport.

In 1840, Adrian H. Davenport was granted several portions of land on the island by the U.S. government as well. Marmaduke and Adrian H. would remain in the area until the early 1850s when they would move with their respective families to LeClaire, Iowa up river from Davenport.

By the early 1850s the Democratic Banner and other local newspapers began to run placed real estate ads for the sale of Credit Island. It would appear that over the years Adrian H. Davenport had been given or purchased from other owners the entire 400 acres of Credit Island. It was now up for sale. 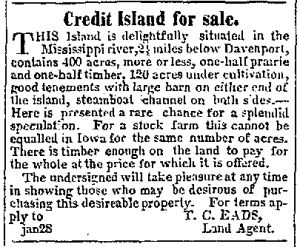 It appears that not everyone was interested in owning a 400 acre island. Even with extensive timberland, prairie land, and 120 acres already prepared for use the ads ran weekly from 1851 to 1853 with no buyer in site.

Finally, a sale is recorded between Adrian H. Davenport and two business men named John M. Burrows and R. M. Prettyman in May 1853.

Burrows and Prettyman eventually sold to Josiah H. Jenney in April 1857. That property was foreclosed on and went to Benjamin Atkinson in 1859 by sheriff’s deed. The property was then sold by Atkinson to James Gilruth on May 1863.

James Gilruth sold the land to John Offerman and wife in December 1864 for $2,000. For the next 40 years, Credit Island would become known as Offerman Island. Mr. and Mrs. Offerman would turn the island into a well-known picnic and recreational area.

Then in April 1904 the Grand Island Park Company sold the land to the Davenport and Suburban Railway Co. who were represented by Mengel, Kuehl, and C. G. Hipwell. During this time period the island was called Suburban Island.

Finally, in February 1918 the land was sold to the Davenport Park Commission (City of Davenport, Iowa) who still maintains ownership.

Soon after this purchase the name was once again restored to Credit Island.

Since 1864 the island has been used for entertainment and recreation. The past 150 years have witnessed picnics, amusement rides, rock concerts, golf outings, and more. Navigate here for the information on how the accommodation part being managed.

Visit our blog again next week to learn more about the amazing history of Credit Island.