The Death of Colonel George Davenport 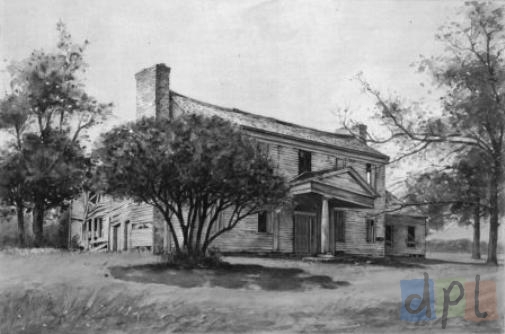 When most people think of the Fourth of July, they tend to think of freedom, fireworks, and food.  Readers of early Davenport history probably think of the same things, but with one addition—murder.

On July 4 of 1845, several men were thinking of the money—said to be at least $20,000—that Colonel George Davenport was rumored to keep in the safe in his home. Two or three of the would-be thieves rowed or rafted to the Mississippi River island (now called Arsenal Island) where Colonel Davenport’s mansion still stands today. It was the perfect time to break in—they figured that everyone in the Davenport household would be attending the big Independence Day celebration in Rock Island, Illinois.  They would all be rich by nightfall.

Two of their assumptions were wrong.

Colonel Davenport had not been feeling well that day, and had decided to stay home. As the men moved through the house to the safe, the Colonel walked in on them. They shot him in the leg and bound him hand and foot. To add to their frustration, when they forced the Colonel to open the safe, there was less than four hundred dollars inside.

Denied their unjust reward, the angry men dragged the Colonel into his own bedroom, where they beat him unconscious and stole a watch and chain, a gold piece, and a gun from a dresser. They fled, leaving the Colonel for dead.

Three passersby, who had planned to spend the day fishing off the island, heard Colonel Davenport’s cries for help. One of them rushed to the Fourth of July picnic and brought back Doctor Brown, who revived the Colonel enough so that he could give a description of the robbers. Unfortunately, his injuries were severe and he died of them that night.

John Baxter—who had been a friend of the Davenport family and a visitor to the house—John Long, Arron Long, Granville Young, and William Fox were eventually charged with murder. William Fox managed to escape before his trial, never to be seen again, but the rest were convicted. After two appeals, John Baxter managed to get his death sentence commuted to life in prison. The others were hanged—in fact, Arron Long was hanged twice, as the rope broke the first time.

The punishment did not stop there. According to Gayle A. McCoy, an author* and historian, the bodies of the three hanged men were donated to a Dr. P. P. Gregg for dissection and study. Dr. Gregg later buried Arron Long and traded Granville Young to another doctor for a barrel of rum, but he kept the skeleton of John Long on display in the hospital steward’s office at the Rock Island Arsenal. Gregg’s widow gave the skeleton to Dr. Charles Kalke of Chicago, who in turn passed it back to the Arsenal in 1940.

John Long was put on display at the Rock Island County Courthouse, and then at the Hauberg Museum at the Black Hawk State Park in Rock Island, Illinois. On September 14, 1978, John was buried in the Dickson Pioneer Cemetery in Rock Island, finally retiring from his unexpectedly active death.

Three others were tried for the Colonel’s death: Robert Birch, William Redden, and Grant Redden were charged as accessories before the fact. Birch was sentenced to life in prison, but escaped, only to be gunned down three months later. William Redden served the whole of his one year sentence. The charges were dropped against Grant Redden, but he moved away soon after, anyway—a smart move, as the Colonel had been a prominent, popular man.

So, while you are out and about this Friday, give a thought for poor George Davenport, and heed the lesson that seems clear from his senseless death: if you are invited to a Fourth of July picnic, go.

21 Responses to The Death of Colonel George Davenport