Giving Credit Where Credit is Due

Special Collections will be participating in the city’s commemoration of this event on August 30, on Credit Island, with an interactive booth.  We hope to see you there!

The War of 1812 was a short war, only two and a half years long, fought between the United States, which was less than 30 years old, and the British, who were still  annoyed over losing their colonies.

It’s often treated as a simple date in our timeline—if we’re asked about details, the only ones that usual come to mind are the burning of the White House and First Lady Dolley Madison saving George Washington’s portrait just before it went up in flames.

But the 1812 War was more important to Davenport, Iowa, than we might think.

Most of the Native Americans living around present day Rock Island, Illinois—including the Sac-Fox tribe led by Chief Black Hawk—were understandably resentful of American settlers, who were not particularly careful or polite about setting up home in their territories. Various unfair treaties chipped away at trust as well as land rights, and by 1812, Chief Black Hawk was ready to join with the few nearby British outposts that remained, hoping to force the Americans off his people’s land.

Meanwhile, a young Antoine LeClaire, whose mother was Pottawattamie and who had been successfully running a trading post in Milwaukee, nevertheless decided to fight on the side of the Americans in the War. His knowledge of Native American languages proved helpful.

As the War continued, the alliance between the Sac and the British was beginning to worry the American government, and after several skirmishes in July of 1814, a group of 344 Americans under the command of Major Zachary Taylor—the future president—sailed up the Mississippi River from St. Louis, Missouri, intending to build a new fort near the Rock River. 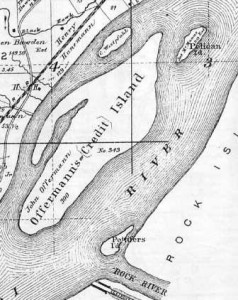 The British caught wind of this, and during the month it took Zachary’s men to reach their destination, a force of thirty British soldiers under the command of Lieutenant Duncan Graham had been sent with heavy weaponry to convince the Americans to turn back.

There was a big storm the night the American arrived in September of 1814.The eight American boats anchored at Pelican Island to wait out the weather. Unknown to them, Graham’s men, along with a large number of Native Americans organized on nearby Credit Island, so called because of the trading post there.

Early the next morning, the British opened fire across the river with cannon, while the Native Americans harassed them from canoes. The Americans were surprised and outnumbered and although they returned fire when fired upon, they sustained heavy damage. After two days, they were forced to retreat.

The Battle of Credit Island was over.

Three months later, so was the War.

But both proved to the American government that some kind of presence was definitely needed where the Rock River met the Mississippi.  Without the assistance of the British, the Sac were unable to prevent the 1816 establishment of Fort Armstrong on an island that would later be called Arsenal Island, about six miles upriver from the battle site.

Two years after that, war veteran Antoine LeClaire, who had been recruited as a government interpreter, was assigned to Fort Armstrong. There, he became friends with quartermaster George Davenport and was present for both the Black Hawk War and the signing of the Black Hawk Treaty, during which his wife was granted the land on which our city stands—a city Antoine LeClaire named after his friend.

All that, from a short battle fought during a barely-remembered War.

Reason enough, we think, to remember it now.

Refer here to find good stock screeners who can trade for you as per your trading requirements.

Bad Behavior has blocked 1976 access attempts in the last 7 days.