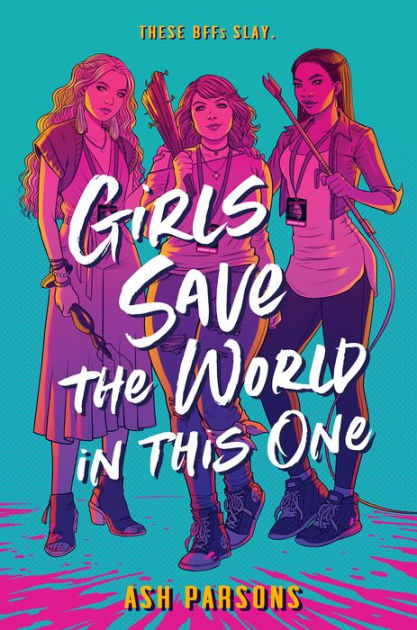 Full disclosure: I was never a huge zombie fan. I’m usually too squeamish for intense gore, for one thing, and I get caught up in thinking about the person a zombie used to be, which only makes it harder to see the zombie gruesomely killed. But as I’ve gotten older, I’ve watched more intense shows and movies like Jurassic Park, Torchwood, and Supernatural, which have helped me sort through both those issues and appreciate the action and heroism, so I’ve gotten… let’s say “lukewarm” about zombies and undead media.

That said, it was still an unusual choice for me to read Girls Save The World in This One by Ash Parsons. This recently-published YA horror novel is narrated by June, a high school senior attending Zombiecon with her best friends. She’s been saving up for this all summer, and is excited to revel in the convention celebrating all things zombies. At first, she’s mainly worried about seeing all the panels and actors she wants to, not to mention graduation, future plans, growing apart with her friends, and whether she’s really as cool as they say she is. But then, the con is thrown into chaos when a virus outbreak launches the real zombie apocalypse, and June and her friends are in a real fight for survival. I was mixed going into this book: while I enjoy fandom, I don’t enjoy the crowds, chaos, and costs of conventions, and I still don’t love the idea of the zombie apocalypse. But I do love girl power and stories where friendship is front and center.

Despite my misgivings, this book did not disappoint me. For one thing, it was helpful to hear June’s take on zombies: they’re not malicious, just hungry and following their instincts, like sharks. But more than that, the diversity is realistic, the friendship is strong, the enthusiasm is contagious, and the examination of ethics and larger issues at play is extremely thoughtful.  As I had hoped, this book was filled with empowerment, celebration of differences and friendship, and pulse-pounding action. I definitely felt, even as someone who’s not a zombie aficionado, that this book was a fresh and fitting addition to the canon of zombie literature. My only real issue with it was that the book’s focus on friendship and empowerment means that (spoiler alert) there’s never a great explanation of how and why the zombie / virus outbreak happens or how it’s going to be resolved. I can’t decide whether or not it’s just added realism: a teenager might not care WHY the crisis happened, as long as it’s over.

If you love feminist takes on classic stories, if you’re looking for a celebration of zombies, or if you have a tight-knit squad that would have your back even if the world was ending, I definitely recommend reading this book.