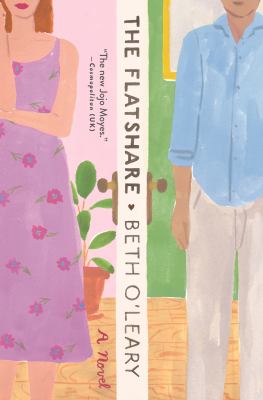 Tiffy needs a place to live, now, but her low-paying editorial assistant job doesn’t exactly allow for posh digs. Or anyplace that’s habitable really. So, against the advice of friends, she takes a flatshare. It’s a nice apartment in a great location in central London and she can actually afford the rent, what’s not to like? Ok, her new flatmate is a guy and there’s, um, only one bed but! He works nights as a pallative care nurse and spends the weekends at his girlfriends’ place so they’ll never see each other. Right? Great! Problem solved!

Leon needs some extra cash. He loves his job but it takes most of his energy and time so a second job isn’t the answer. He’s almost never at his flat except to sleep during the day so why not share the space? It’s a great plan! Leon’s girlfriend shows the potential roomie the flat and assures Leon that Tiffy is dull and unattractive. Perfect! Leon doesn’t even have to meet the flatmate, it’s all tidy and anonymous and great! Except, Tiffy brings some of her things to the flat – which, ok, to be expected – but they’re bright and girly and the opposite of dull. Huh.

Then the post-it notes begin. At first it’s formal and impersonal – “Help yourself to the leftover cookies!” – but pretty soon their notes become friendlier and bits of their personalities shine through. Tiffy is bright and funny and optimistic and Leon is kind and patient. Of course, inevitably, they run into each other, in the flesh. Literally. Sparks fly. Tiffy is not dull and unattractive. Leon has recently broken up with his girlfriend. Can Tiffy and Leon move from flatmates to friends to something more?

The Flatshare is a fun romance. The final outcome is pretty much inevitable but the path these two take is interesting and adds a lot to the story. There is the shadow of domestic abuse (NOT between Tiffy and Leon) and the long term damage it causes, staying loyal to someone when everyone else has doubts, taking a risk and walking through that door, opening yourself up to love again. Leon and Tiffy are great characters that you’ll root for, and their supporting cast are fun and interesting. Plus, it’s set in London. Blimey! What’s not to like?

Bad Behavior has blocked 1440 access attempts in the last 7 days.