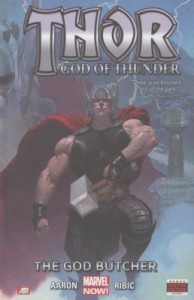 I have always found Thor to be very intriguing. An immortal God growing up in his father Odin’s shadow, listening to tales of war and the defeating of enemies and subsequently struggling to lift Mjolnir, his magic hammer, when he was younger because he wasn’t worthy yet. In the Marvel movies, viewers get some flashbacks of Thor’s life, but not as much as I was looking for. Instead of digging into Norse mythology, I decided to look at the graphic novels available at the library to see what background they could provide me. That was where I found Jason Aaron’s run of Thor.

Thor: God Of Thunder, Volume 1: The God Butcher is the first volume in Aaron’s run that gives readers an insight into Marvel NOW!’s interpretation of Thor. I found this graphic novel to be confusing, yet ultimately rewarding because it filled in many of the wholes that I had about Thor’s upbringing and his motivations for behaving the way that he does.

Let’s get down to the nitty gritty: The reason I found this graphic novel to be confusing is because of the story line. In this first volume, Thor is on the hunt for the God Butcher after discovering floating body parts of a God in a river after a fight. The horror in the eyes of the deceased God catapults Thor on a hunt that defines his actions for the entirety of his life. This graphic novel is a prime example of why you MUST pay attention to the artwork in order to follow the storyline. This volume is essentially three Thor stories being told at once: past Thor, present Thor, and future Thor, all on a quest to hunt down and kill the God Butcher who has made it HIS mission to kill all of the Gods across all of the worlds. Differentiating between past Thor and present Thor is a little difficult, but there are wardrobe and art style clues that will help key you in to what Thor you are actually looking at. This first volume of Thor is perfect to set up the rest of the series’ run because it introduces a villain that even Thor has trouble defeating, the idea that gods are vanishing and no one is aware or really even cares, and that this is a problem that has taken thousands of years to solve, yet still hasn’t been fixed. (Bonus: There is a Lord Librarian who has WINGS and who Thor goes to for help!) The back stories of both Thor and the God Butcher are exquisitely thought through and Ribic’s artistic descriptions of Thor’s struggles really show the darkness of this seemingly eternal fight. Check this out and let me know what you think! 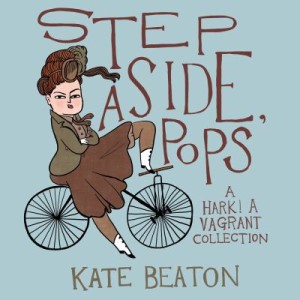 Step Aside, Pops: A Hark! A Vagrant Collection is Kate Beaton’s third published book of comics, but fourth overall. (Other ones by Beaton that the library owns are Hark! A Vagrant and The Princess and the Pony.) This new graphic novel is a collection of strips from her webcomic, Hark! A Vagrant. Webcomics are generally self-published online and are sometimes even published into books or as single strips in magazines or newspapers depending upon their popularity.

In Step Aside, Pops, Beaton takes a turn at digging into the lives of various literary, historical, and contemporary figures and characters. Think of this graphic novel as a collection of Beaton’s musings and ideas about different people throughout history. Her obvious love of all things literature, historical, and pop culture related flow through this graphic novel as she dissects the lives of Wonder Woman, what it was really like to be a peasant in a time of no medicine or deodorant, and how different famous Alexanders handled rough situations throughout time. Crack open this graphic novel and you’ll see how Beaton reimagines the lives of Achilles, the founding fathers when they find themselves in a shopping mall, and even how Cinderella would have played out if she had been a bodybuilder.