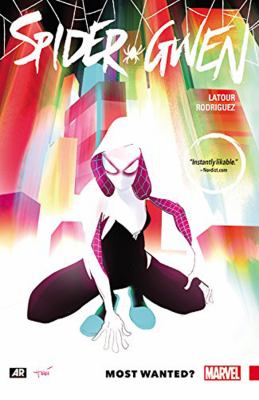 So if you’re not aware, a major event has unfolded in the Marvel Universe resulting in the Spider-Verse, the biggest Spider-event in history. In Spider-Verse, this November 2014 debut event began with Morlun announcing the Great Hunt, where he and his family would hunt down and kill every Spider-totem/Spider-creature in the Multiverse. As numerous Spider-themed superheroes were being killed, they realized that they needed to band together, so Spider-Man decided to create a team to help fight against all of the villains. This event launched multiple storylines with villains across the different universes launching their own nefarious plans to take down the different Spider-heroes in their own specific universes.

All of this background information leads to Spider-Gwen, Vol. 0: Most Wanted. In an alternate universe, Earth-65 to be exact, Gwen Stacy is alive, having never been thrown off the Brooklyn Bridge by the Green Goblin. In Earth-65, it isn’t Peter Parker that is bitten by the radioactive spider, it is in fact Gwen Stacy, who then becomes Spider-Gwen, also known as Spider-Woman.

Spider-Gwen, Vol. 0: Most Wanted focuses on the life of Gwen Stacy after the death of Peter Parker. Gwen is wrestling with Peter’s death for two reasons: 1) he died in her arms and 2) everyone is blaming Spider-Gwen for his death when in reality, it wasn’t her fault at all. In this universe, Gwen is in a band called the Mary Janes, and shortly after becoming Spider-Gwen, Peter Parker experiments and in trying to become more like Gwen, he becomes the Lizard, which ultimately leads to his death. A man-hunt begins with everyone looking for Spider-Gwen and J Jonah Jameson leading a giant smear campaign against her in the papers and with Gwen’s own father, Captain George Stacy, leading the hunt to capture Gwen.

This first volume is especially intriguing to read because in addition to all of the superhero problems Gwen is facing, she is also dealing with the drama of being in an all-girl rock band and trying to find a balance between her personal and private lives. I highly recommend you check out this graphic novel because it will go more in-depth into Gwen’s world and will allow you to compare the “normal” Spider-man universe with the universe where Gwen has the spider powers.

Bad Behavior has blocked 1291 access attempts in the last 7 days.