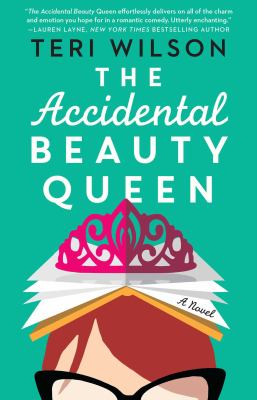 I grew up in a small town where beauty pageants happened every summer. Moving away to college, I discovered that spending your summer watching beauty pageants was not the norm. I honestly had not thought much of the pageant life again until recently when I discovered The Accidental Beauty Queen  sitting on the new shelf at work. The premise was intriguing, so I decided to give it a try!

The Accidental Beauty Queen by Teri Wilson tells the story of two identical twins. Charlotte and Ginny Gorman look alike, but that is where their similarities end. Charlotte is an elementary school librarian who absolutely loves her job. Being a librarian allows her to spend her day around books and help her students. Her twin sister Ginny is a beauty pageant contestant. Building her brand through various social media platforms, mainly Instagram, Ginny works hard to fill their mother’s beauty pageant shoes(not literally). Their mother died when both Ginny and Charlotte were young and Ginny chose to honor her by competing in the same pageant she had competed in before.

Ginny is a repeat beauty pageant contestant, someone who has been after a crown for as long as Charlotte came remember. Her ultimate goal? Being crowned Miss American Treasure. Charlotte may begrudgingly support her sister, but she still doesn’t understand the appeal. Charlotte accompanies Ginny to her latest beauty pageant because she’s promised a week of vacation with Harry Potter World close at hand. Staying in the same room with Ginny, Charlotte is privy to some behind the scenes looks as Ginny prepares. Ginny is pretty sure she has this pageant in the bag.

It all comes crashing down when Ginny has a severe allergic reaction to the dinner she shares with Charlotte the night before the competition begins. After Charlotte rushes Ginny to an urgent care (under cover and in secret, of course), they both realize that Ginny will not be back to her normal beauty queen self for at least three days. Those three days are the bulk of the pageant! At her wit’s end, Ginny begs Charlotte to fill in for her for those three days. Her doing so would allow Ginny the time she needs to heal, but she would be able to swoop in at the end for the finals. Reluctantly agreeing to help, Charlotte soon finds herself thrown headfirst into full-blown pageant life. Ginny gives Charlotte a makeover full of push-up bras, glittery pageant gowns, hair extensions, false eyelashes, and full faces of makeup. As Ginny tries to prepare Charlotte for everything that goes into a pageant, Charlotte quickly finds out that there is way more to this way of life than crowns and gowns.