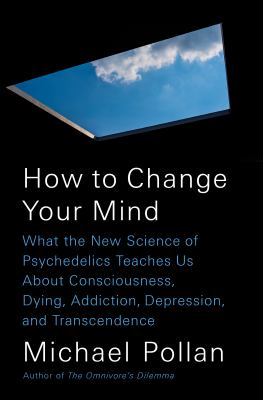 As someone born after the 1960s counterculture revolution, I had only heard horrifying tales about psychedelics.* I knew to steer clear of any schoolmates who “dropped acid.” Imagine my confusion over the past several years as I’ve been hearing about people flocking to retreats led by Shamans who administer ayuhausca in South America and reporting positive results. That didn’t align with my lifelong understanding of these substances.  I recently spotted Michael Pollan’s latest book here at the Library and knew he could help with my cognitive dissonance.

Michael Pollan is a fantastic writer who delves deeply into relevant topics for his best-selling books. In How to Change Your Mind, he unravels the history of psychedelic drugs. The discovery of LSD seemed to be a threshold into a new facet of treating psychiatric patients, curing addiction, and treating anxiety. The United States government even experimented on people with it. The title is a double entendre referring to the personal use of psychedelics to gain an altered state of mind and to the shifting attitudes about psychedelics among the medical field and general public.

Pollan deliberates over the reasons for the demise and demonization of psychedelic drugs, including the obvious one, Timothy Leary. Politics and the counterculture are directly involved. Pollan examines a few notorious characters and several earnest and dedicated proponents along the way. I liked that he included the science of how psychedelics work on the brain. It was neuro-nerdy. He chronicles the quiet re-emergence of psychedelics into clinical and academic research.

This book is as fascinating as it is hopeful. Current researchers are finding similar results to the earliest studies of psychedelic drugs assisting smokers overcome the habit. There was a poignant story of one of the terminally ill cancer patients who were given psychedelics to help alleviate the fear of death. The results were life changing not only for the patient, but also for those surrounding him. There are a number of other potential uses for these drugs, including treating PTSD and depression.

I listened to the audio version read by the author himself and I enjoyed it. I’m curious where this “new” research will lead. Michael Pollan may just have shown me how to change my mind about this topic.

*Hollywood celebrity, Art Linkletter’s crusade against LSD comes to mind. While reading this book, I used the wonder of the Internet (something we didn’t have in my youth) to learn about this story a bit more since it had seared itself into my impressionable mind at the time. I discovered his daughter committed suicide and the toxicology reports did not reveal substance use that night. Shame or the stigma surrounding suicide may have motivated the Linkletter family when they used an already-circulating urban legend about a girl jumping out of a window on LSD to explain her death.