130 years ago this week, Davenport City Council hired Miss Annie E. Davis from Chicago, Illinois to be the first police matron for the city. On June 26, 1889, Miss Davis arrived in Davenport on an early morning train and immediately was shown to City Hall to be sworn in by Mayor Earnest Claussen.

By late morning she was already at work.

The role of police matrons had begun in larger cities across the United States in the 1880s as part of an ongoing national reform movement. Police matrons worked in police stations and houses of detention with women and children brought in for various illegal activities such as prostitution or pick-pocketing. Others in their care had become homeless or suffered from alcoholism. For the first time, women and children were separated from male prisoners and placed under the care of female police matrons who not only took care of their physical needs while in custody but also worked to find safer situations for those who wished to leave the lives they were living behind.

Many of Davenport’s social organizations and charities had worked for months to bring a police matron onto the Davenport Police Force. This was considered an experiment by many in the community. Would this reform approach work in Davenport? Only time would tell. 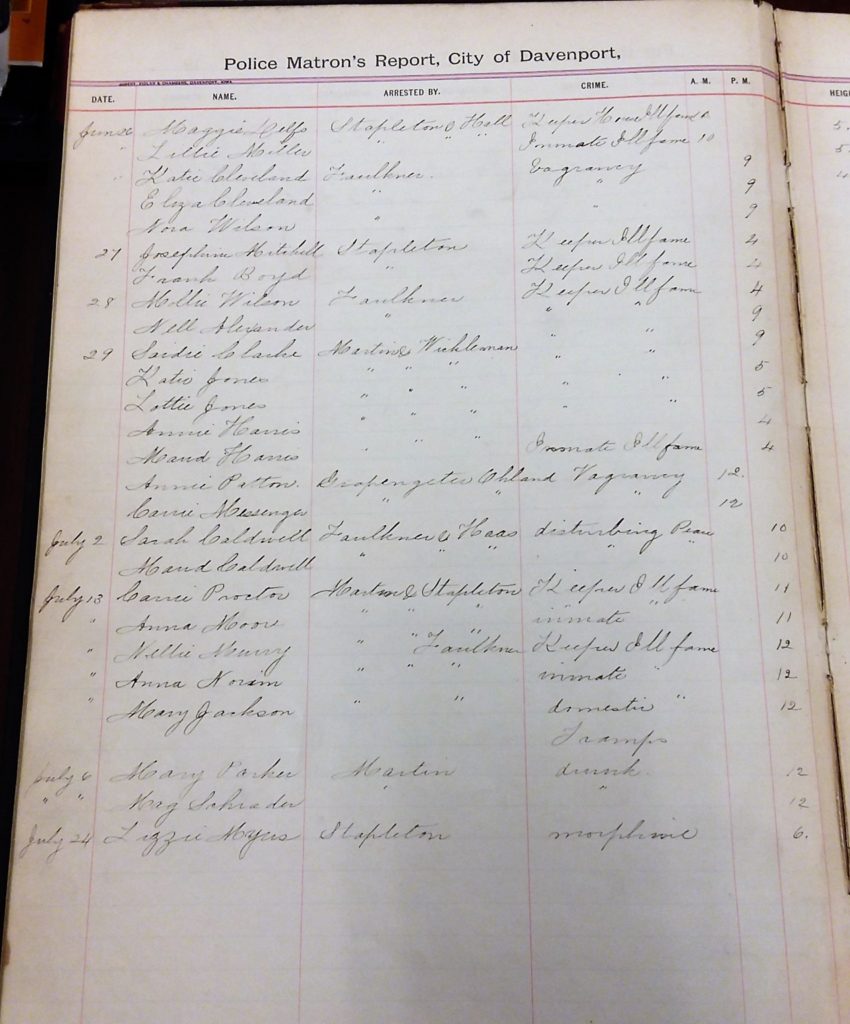 Little has been known of Annie E. Davis in our records, but through research and luck, we finally have learned a little about her life.

Anne E. Davis (referred to as Annie in newspaper accounts and documents) was born March 17, 1855, in Cincinnati, Ohio to John and Mary Davis who had immigrated a few years earlier from Wales. The 1860 United States Census lists Annie as living on a farm in Madison, Jackson County, Ohio with her parents and three brothers. The 1870 United States Census lists Annie living with her parents still in Madison, Ohio on a farm. Another brother and sister had been born into the family during the early 1860s.

By 1880, Annie and her family moved to Madison, Jefferson County, Indiana. Annie was 25 and unmarried in the census record, which was not extremely uncommon for a woman her age during this time period. Many young men died during the Civil War and those who survived or were too young to join had begun leaving the settled areas of the mid-west to go further westward to cheaper land and new opportunities. Many women of Annie’s age may have struggled to find suitors. These factors, or a lack of interest in marriage, left her as a single adult female in her parents’ household.

We learn through genealogical research that Annie’s mother dies in 1882 and her father in 1883. Around this time, Annie moves from Indiana to Chicago, Illinois to live with extended family and becomes a police matron at the Des Plaines Street Station for the Chicago Police Department.

A great deal of Annie’s work background comes from two newspaper articles published around the time of her hiring by The Davenport Democrat Gazette (June 26, 1889. Pg. 1) and The Morning Democrat (June 27, 1889. Pg. 4). The newspapers describe a well-built woman of about 35 years of age who talked about her previous job of several years with the Chicago Police Department and her efforts at reform with women and children. The one thing she noticed about Davenport was its lack of a house of detention for only women and children. When she was hired, women and children would be kept in the same general area as men.

By October 1889, a house of detention for women and children had been created at 124 W. 5th Street. Once home to Company B of the United States Army, the building was given to the city and renovated to not only house women and children in three rooms with bunks, but to serve as stables for police horses and wagons as well (it would later be known as the Ambulance Barn).  Police Matron Davis had living quarters in the building as well. She was paid $50 a month to live onsite and was available 24 hours a day. The average salary listed for male police officers in the Davenport Police Department roll call books during this time was $55 a month. 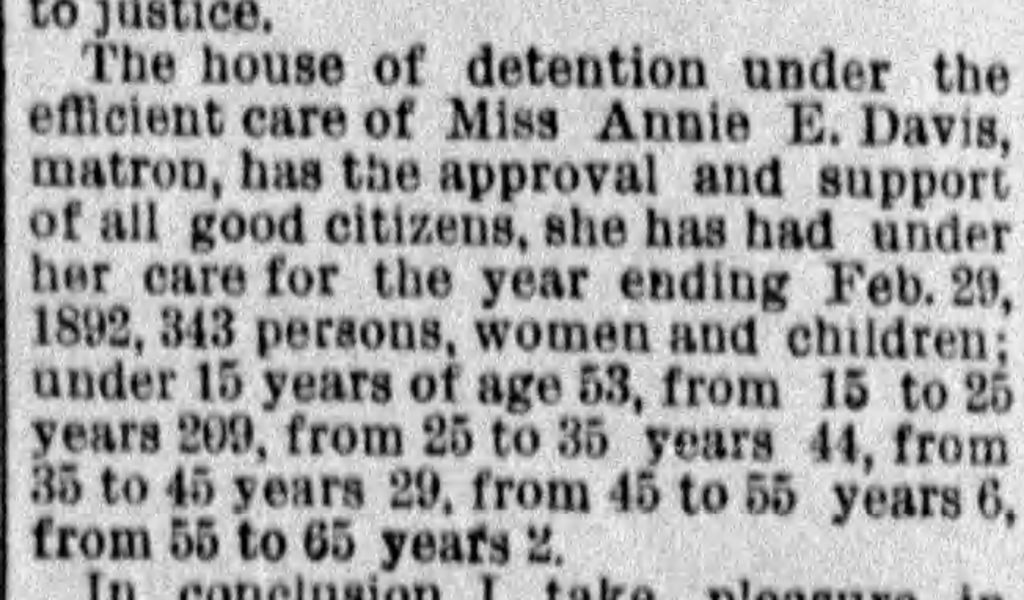 Police Matron Davis’ duties were largely confined to the house of detention and court appearances. She was not considered a female police officer nor was she expected to patrol. Newspaper accounts would sometimes heap praise on her work while other times critique it strongly. The question that always surfaced, it appeared, was trying to reform these women and children actually working?

In May 1893, a movement began in City Council to try to reduce the police matron’s salary from $50 a month to $25 dollars to save money. Annie Davis still lived in her quarters attached to the house of detention and was considered on duty 24 hours a day. This motion by some in council failed to pass. 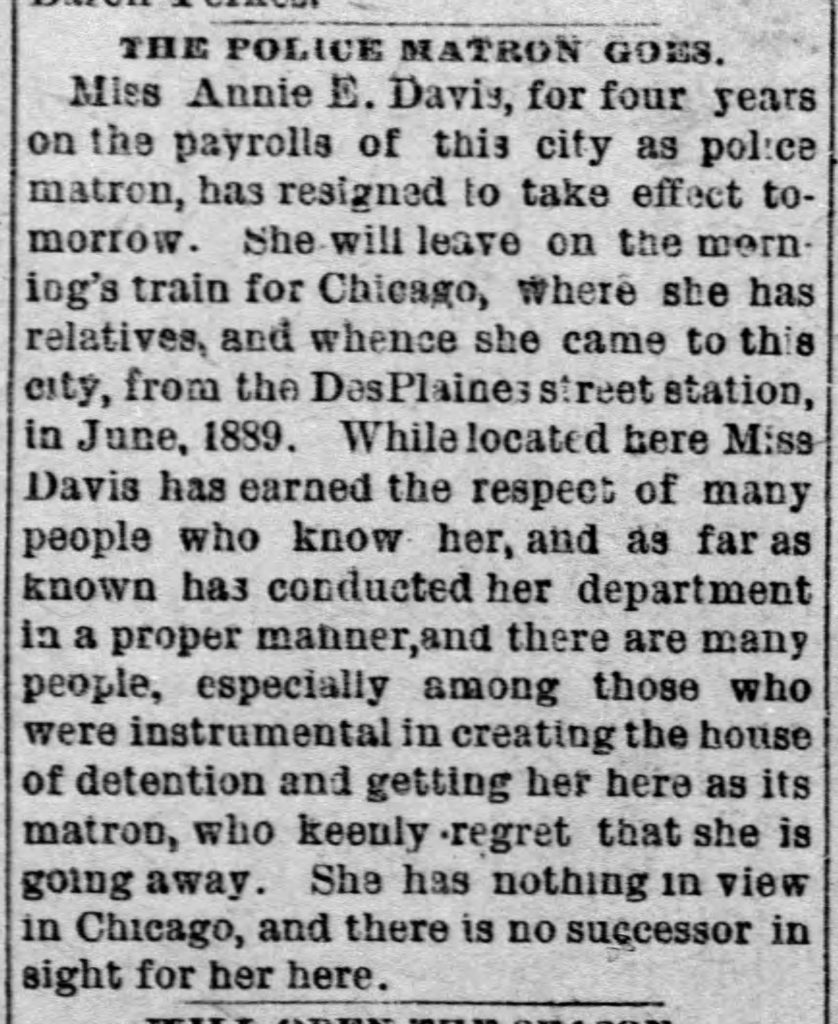 The newspaper articles seemed to indicate regret at her leaving her position. All that was known was she had no position awaiting her and she returned by train to the train Station on Des Plaines Street in Chicago. It was assumed she was going to stay with family.

For many years our hunt for what happened to Annie E. Davis ended with these last newspaper accounts in May 1893. All we knew of Annie came from local newspaper articles during her service. She was a single woman of about 35 years old who came from Chicago, Illinois and returned there after she left Davenport in 1893.

Annie Davis – we quickly learned was a very common name in Chicago, Illinois in the 1880s and 1890s. So very common.

It wasn’t until a staff member came across an item in The Morning Democrat from May 25, 1892, on page 4 that we had our break in research.

Knowing local newspapers frequently made mistakes with names and places listed under the personal items, we expanded our search to nearby states. With luck, we finally found the connection. Mrs. Elmer Scott of Madison, Indiana was born Emma Davis in 1860. She was Annie Davis’ younger sister.

Once this connection was made, we finally learned what happened to Annie E. Davis, the first Police Matron for the Davenport Police Department.

After leaving Davenport, she did return to her extended family in Chicago, Illinois. In the 1900 United States Census, Annie E. Davis is living with her aunt, Annie Francis, who ran a boarding house in Chicago. No job is listed for Annie E., but she may have been assisting her aunt with managing the boarding house.

By 1910, the United States Census shows Annie E. living with her sister and her family in Madison, Indiana. Emma Davis Scott passed away on June 23, 1910, from typhoid fever.

Annie remained living with her brother-in-law and helped raise her sister’s children until her death on October 18, 1913. Her obituary in The Madison Daily Herald (Madison, Indiana Pg. 4) on October 18, 1913, mentions an illness of five months preceded her death.

Annie E. Davis was buried in Springdale Cemetery in Madison, Jefferson County, Indiana near her sister Emma and parents.

It was an experiment in social reform that began on June 26, 1889, with Miss Annie E. Davis during a time when many women and children were overcome by their life circumstances. It is amazing to see the dedication of Miss Davis, Mrs. Hill, and Miss Boettcher had to helping others.

Bad Behavior has blocked 555 access attempts in the last 7 days.