Jonathan Smith Slaymaker was born in York, Pennsylvania on March 31, 1835. He worked as a civil engineer for the railroad. He came to Davenport and lived with his uncle Henry on Brady Street, between 14th & 15th.

On April 24, 1861, Slaymaker enlisted in Company C of the 2nd Iowa Regiment of Volunteer Infantry. He mustered out on May 2nd, 1861 with the rank of First Lieutenant. Shortly thereafter, he was promoted to Captain on October 3, 1861. 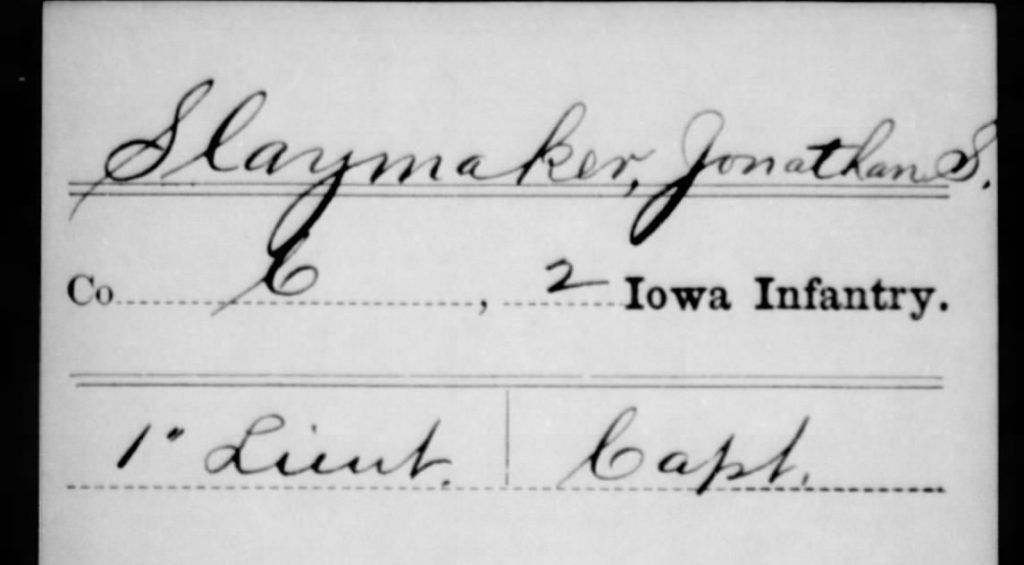 Slaymaker’s words to a friend at the time of his enlistment:

“Shall I be one of those destined to be left behind when the conquering hosts return to receive the thanks of their fellow countrymen for the precious service they have rendered? is a question that frequently suggests itself to my mind. One thing I know: I enlisted in this war from principle, and I feel that I am willing to make any sacrifice that is in my power, to assist in our good and just cause. I shall not want to return unless we gain our end.” 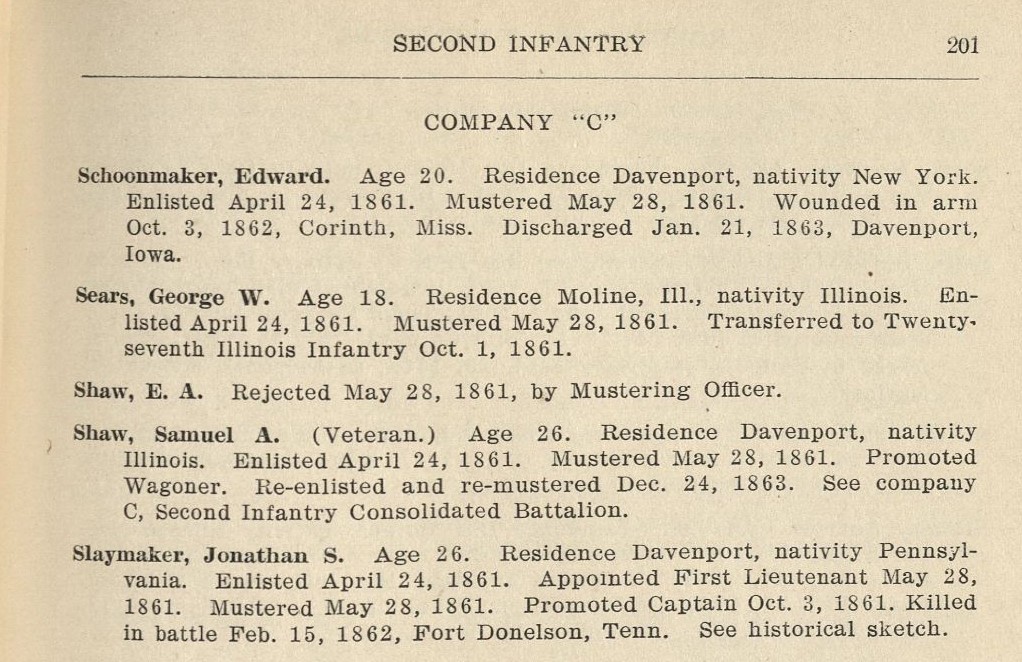 Roster & Record of Iowa Soldiers in the War of Rebellion

Captain J.S. Slaymaker died at Fort Donelson, Tennessee on February 15, 1862. In a letter from Fort Donelson sent to the Editors of the Democrat and news on February 24th and published on March 7th, 1862, a soldier in his company wrote:

“Of the five killed in our company, four fell before reaching the entrenchments. Captain Slaymaker fell within about twenty feet of the works, while gallantly cheering on his men; he strove to regain his feet, a moment after falling, but finding it impossible, rested himself on one arm, and with the other waived his sword above his head and shouted ‘Charge, boys charge!’ They were the last words he was heard to utter, for the line swept on, and before any one could return to him after the rebels were driven from their works, he was dead. Thus fell one of the noblest of men and best of Captains. His death is deeply regretted by the whole regiment – in which he was a general favorite – but by none so much as his own company, who feel that, in loosing him, the have lost one whose place can never be filled.”

“Poor Jack Slaymaker lost his life in one of the most brilliant charges on record. He had, with his regiment, reached the breastworks and passed in, when a ball shot him in the thigh and severed the main artery. He bled to death in five minutes. I enclose a lock of his hair, which I secured myself, that you will hand to his bereaved parents. He was as gallant a soldier as ever carried a sword. After he was wounded, he raised himself on his side, waved his sword and called his men to go forward, then sank down and died. He was a good steadfast friend of mine, and I mourn him much. It is melancholy to think, that the first time he was under my commend should be his last. But he died gloriously. What more can a man do for his country?” 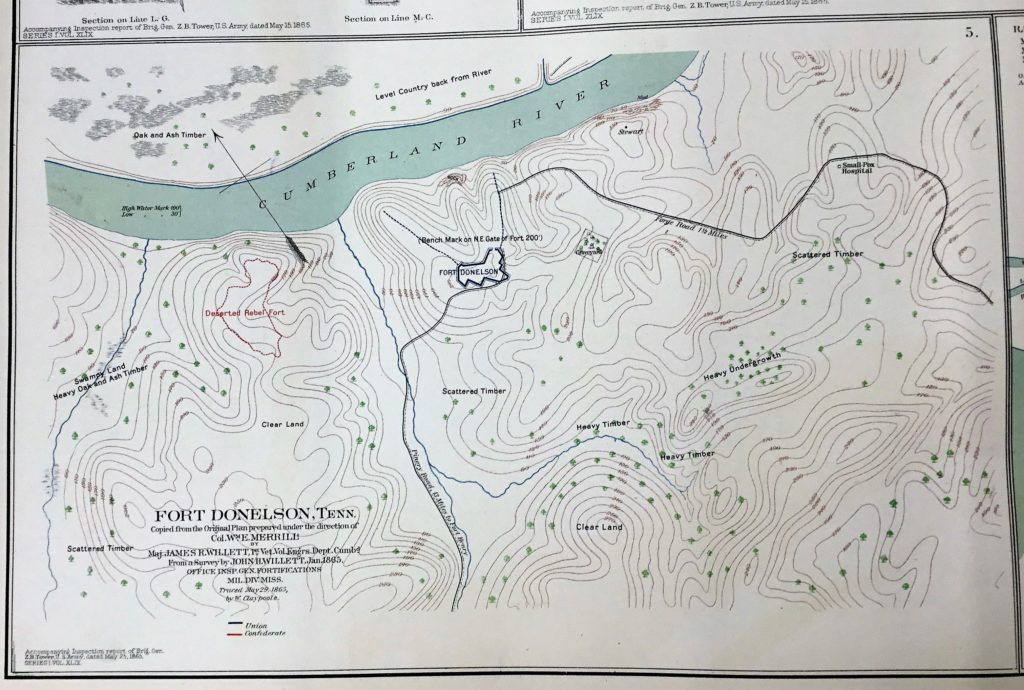 Atlas to accompany the official records of the Union and Confederate armies. Plate 114 No. 5

“My heart bleeds for you in your loss. Your son was lovely in his life – in appearance, in his manner, in his spirit, in his hopes and promises in regard to future life, in all that could bind the hearts of loving parents to a son. God has done it, whatever be the instrument. It seemed good to God, that he should fall as he has done. When you gave him to God, you gave him to Him to live as long as He should please, to serve Him in any way He should direct, and then to lie down and die when, where and how God should appoint. ‘I opened not my mouth’, said the Psalmist, ‘because thou didst it.'” 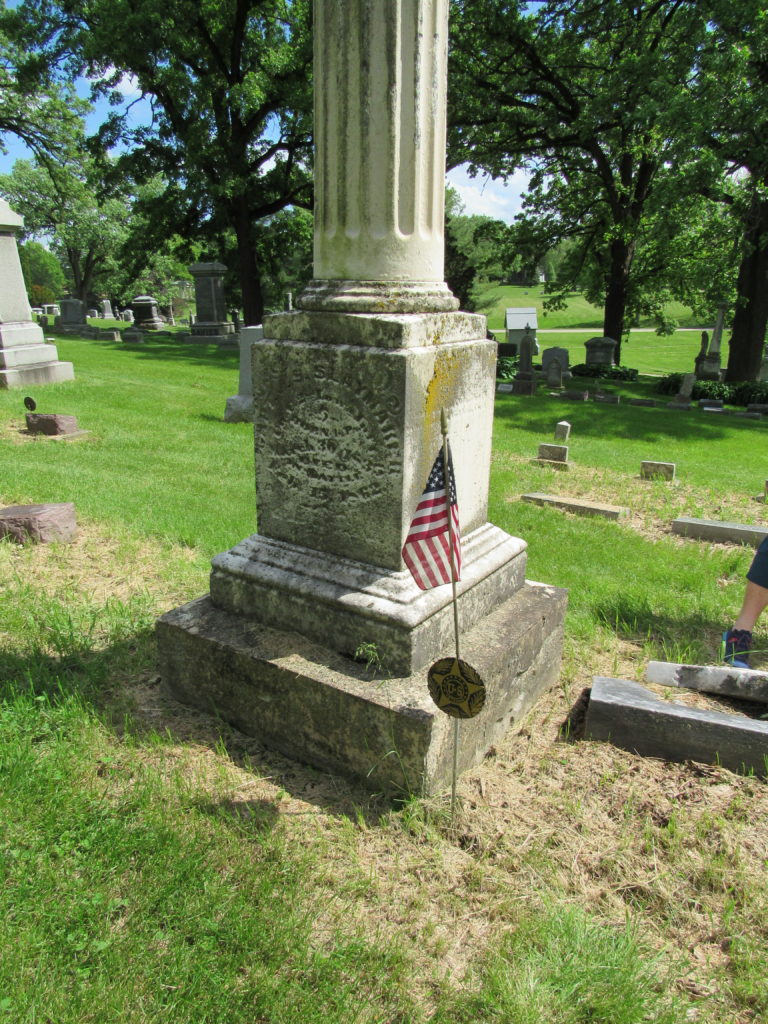 Captain Slaymaker is buried in section 1, lot 69 of Oakdale Memorial Gardens. A marble monument was completed in July 1863 with the following inscription:

“He was among the first to volunteer in the defense of the Union. After laborious and valuable service in Missouri, he fell at the memorable siege at Fort Donelson, Tenn., while gallantly leading his command to victory.” 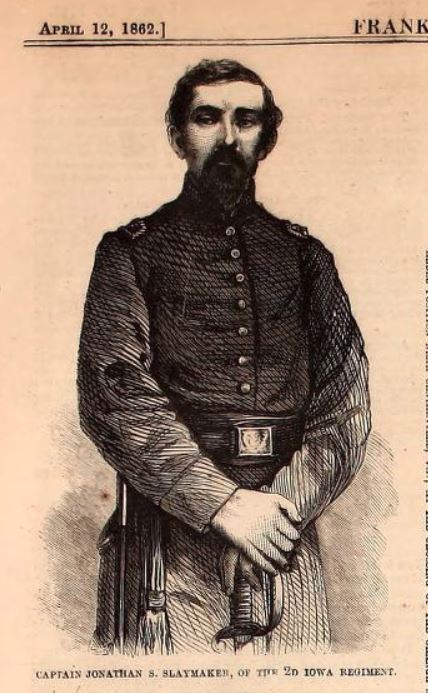 Roster and records of Iowa soldiers, war of the rebellion Vol. 1, p. 201

Registers of Deaths of Volunteers, compiled 1861–1865. on AncestryLibrary

Atlas to accompany the official records of the Union and Confederate armies. Plate 114 No. 5