As the Quad Cities moves into May we are at 49 days and counting above flood stage at Lock and Dam 15 in Rock Island, IL. This breaks all previous continual flooding records at that lock. (Update 05/13/2019 – At 3:00 p.m. on May 12th the Mississippi River at Lock and Dam 15 fell to 17.9 feet for the first time since March 23rd. The new continual flooding record is now 51 days)

As indicated in our April 18, 2019 blog, extremely cold weather, heavy snowfall in the north, and a wet spring contributed to a new #8 flood record on April 8 – 9 with an unofficial record of 20.68 feet.

Since that blog, heavy rains locally and more snow up north have kept the Mississippi River rising through many cities including Davenport. This led to two recent flood-related events: a break in the Hesco Barrier near Pershing Avenue and River Drive which caused flooding in downtown Davenport on April 30, 2019 and a new historic crest level of (unofficially) 22.7 feet on May 2 – 3, 2019. The July 9, 1993 record of 22.63 feet is now ranked #2 in historic crests at Lock and Dam 15.

As we have done since 2008, photos were taken during this recent crest on May 3, 2019. Higher flood waters this time prevented us from taking photos at the locations usually used, but we tried to get near those familiar markers for perspective and comparison value.

We will share a few photos from this historic crest in comparison to photos taken on April 9, 2019.

No pictures were taken from the Arsenal Bridge or in Bechtel Park this flood due to high water conditions. 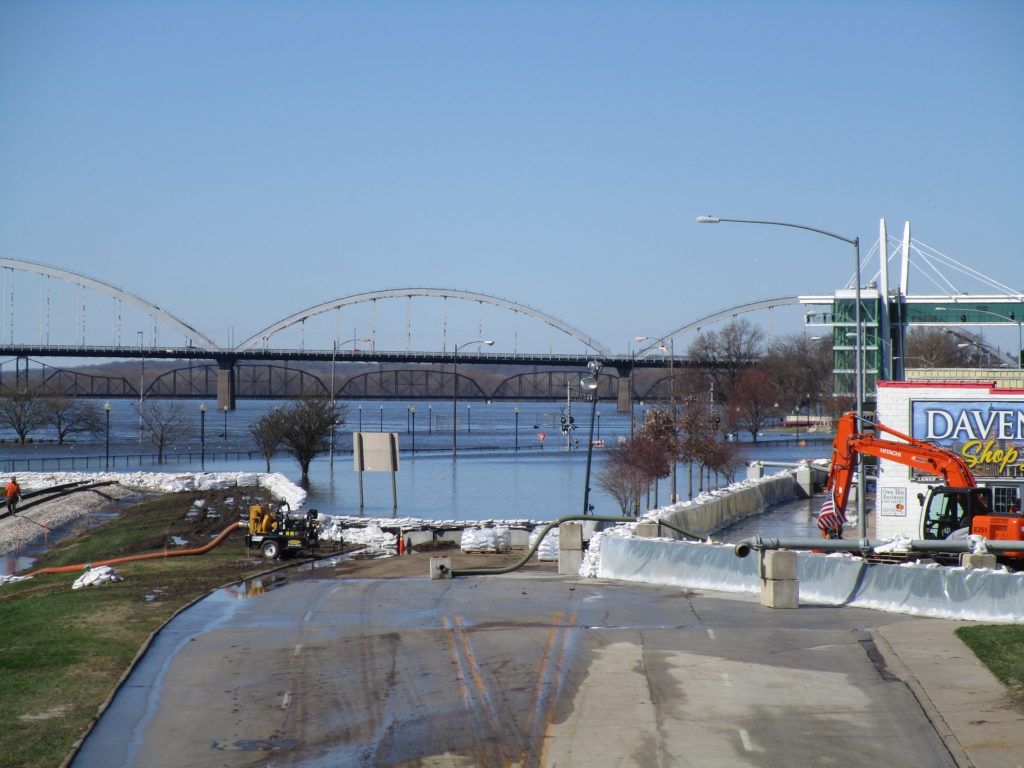 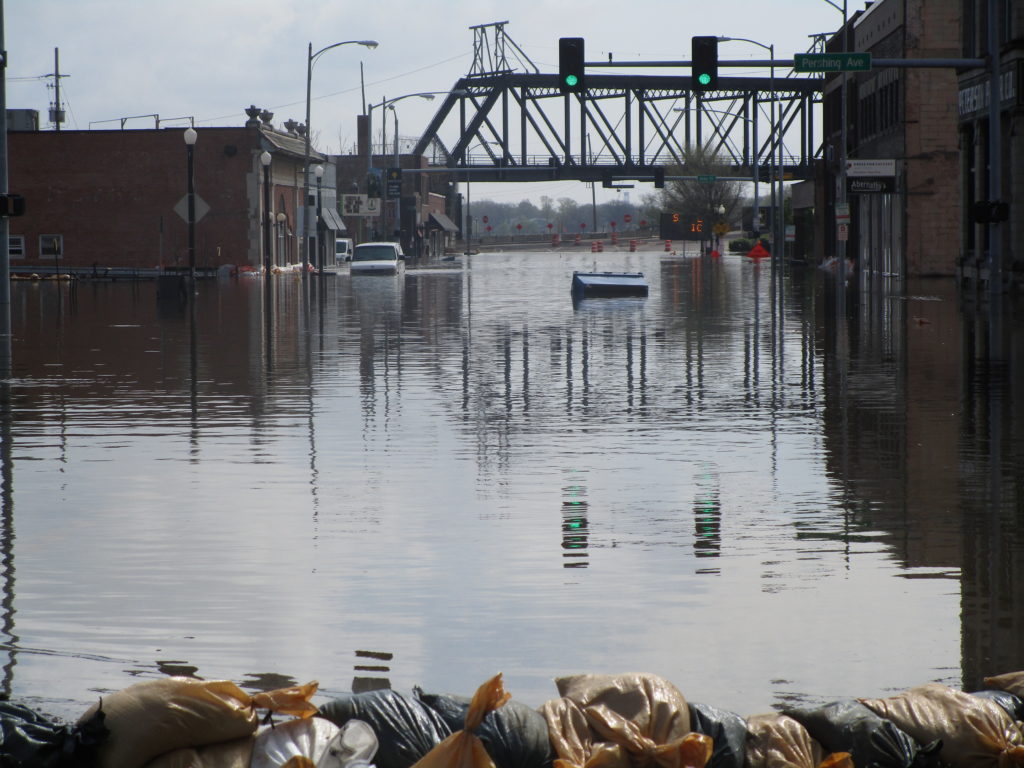 2019-12 – 0638  May 3rd – Photo taken on 2nd Street facing the Arsenal Bridge. This area was affected by the Hesco Barrier break on April 30, 2019. Past flood photos have been taken while standing on the bridge and Bechtel Park on the right next to the submerged orange road construction sign. The blue object in the road is a dumpster. 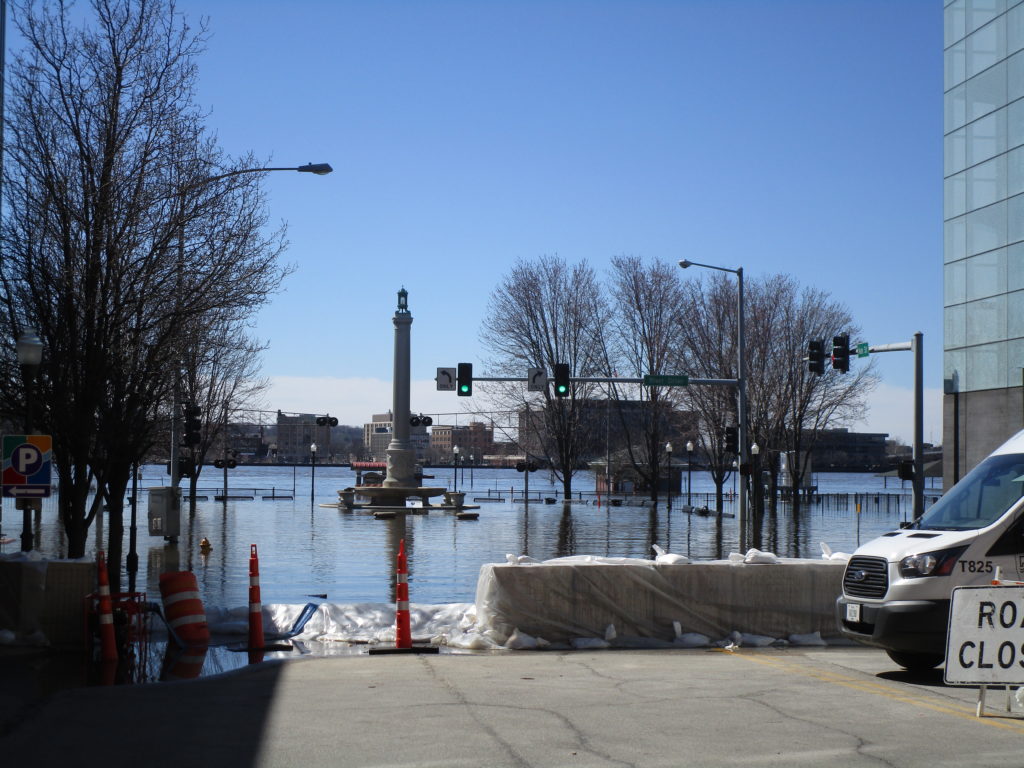 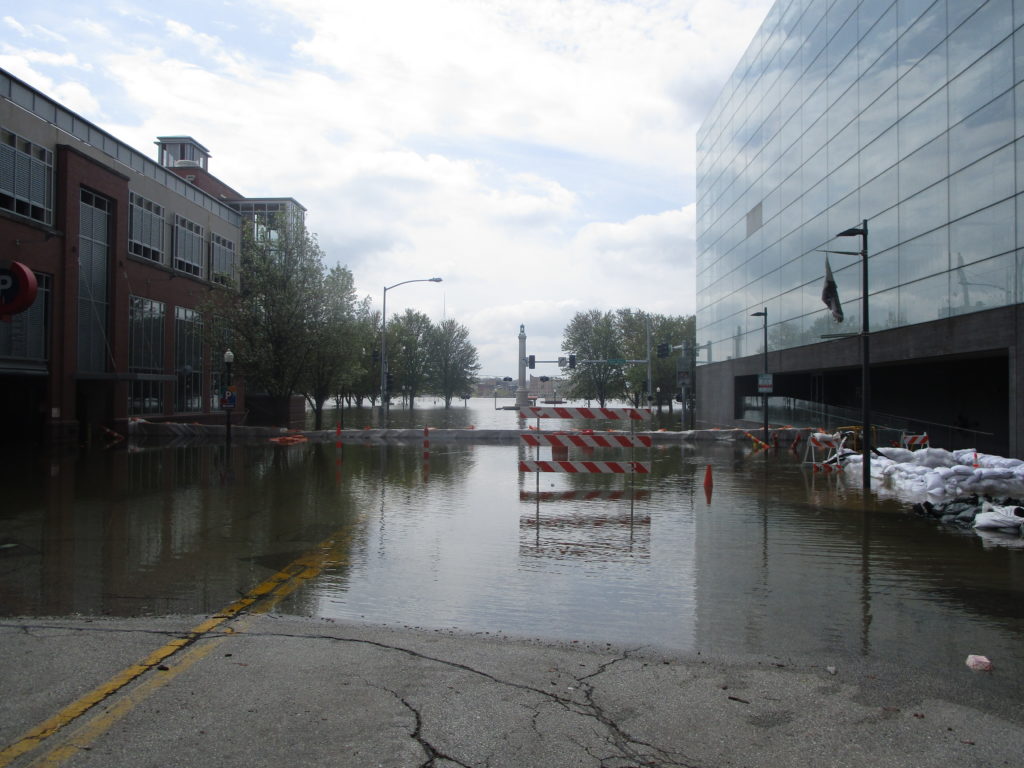 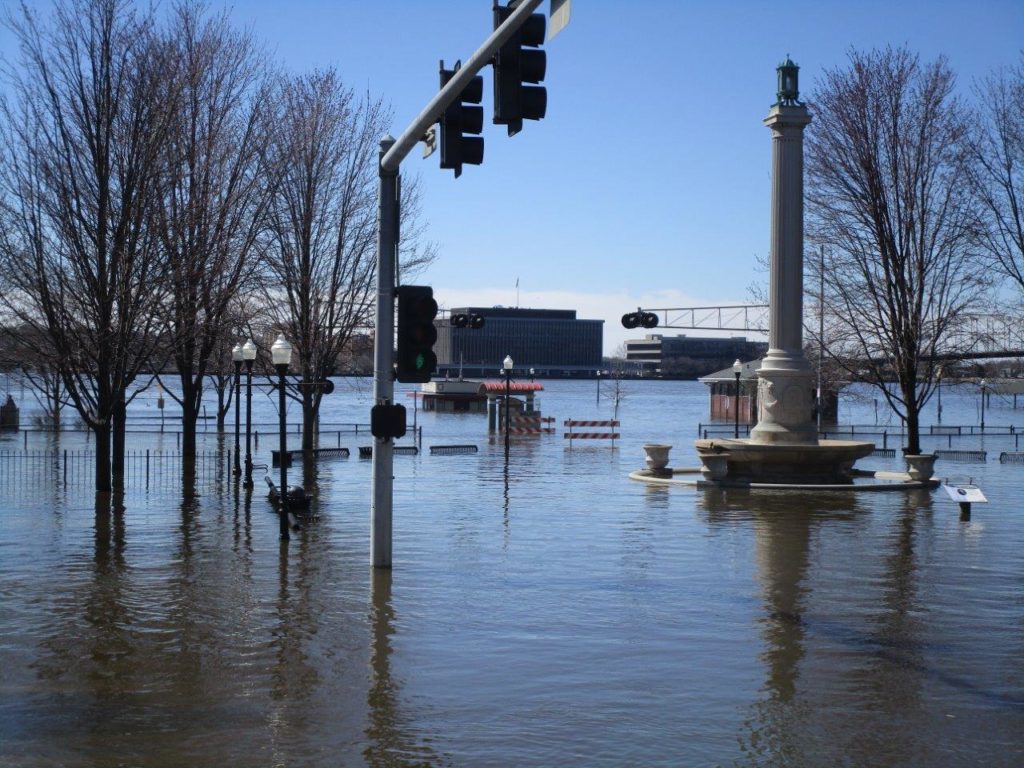 2019-11 – 0459 April 9th – Taken from corner of Main Street and River Drive on parking ramp steps facing Dillon Fountain with LeClaire Park and Mississippi River beyond. Levee Inn, a historic flood marker, is the last building seen in the middle. 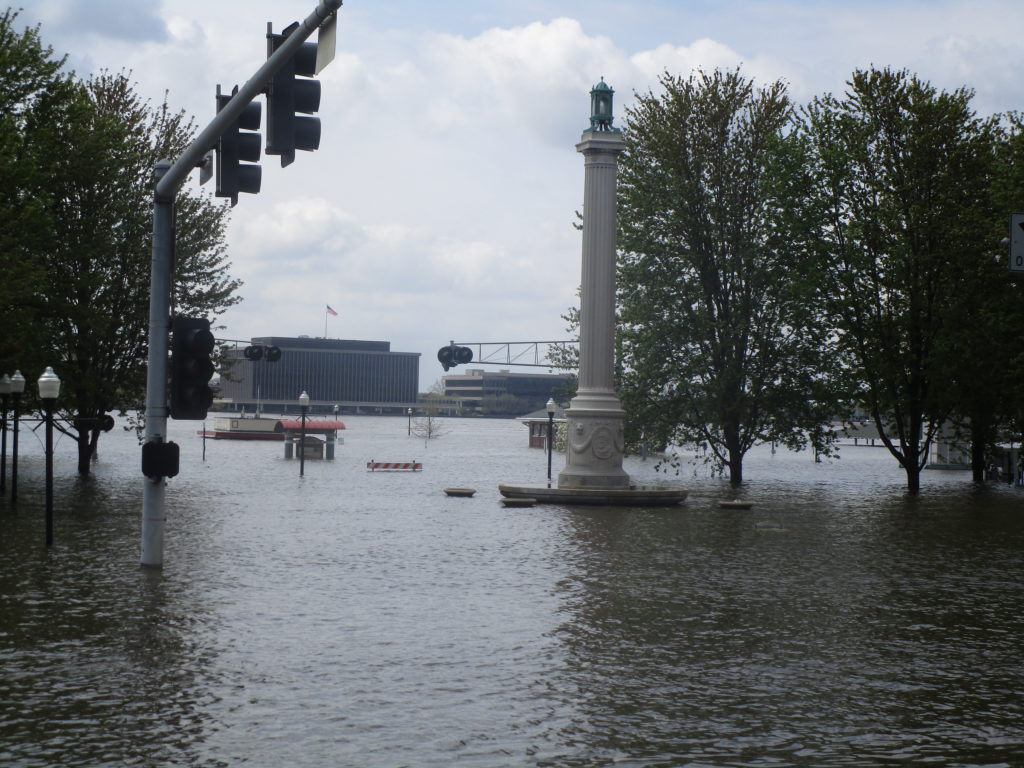 2019-12 – 0705 May 3rd –  Taken from corner of Main Street and River Drive on parking ramp steps facing Dillon Fountain with LeClaire Park and Mississippi River beyond. Levee Inn, a historic flood marker, is the last building seen in the middle with water to the roof. 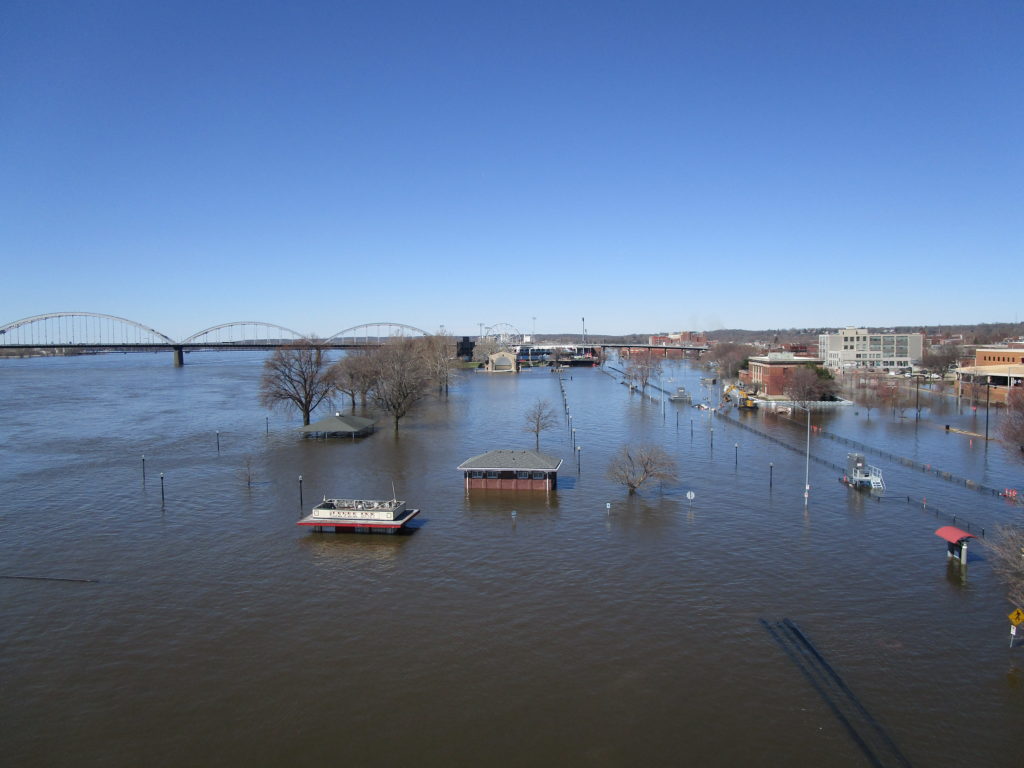 2019-11 – 0472 April 9th – Taken from the upper deck of the Skybridge facing west towards LeClaire Park and  Modern Woodmen Park Stadium beyond. Note the Levee Inn. 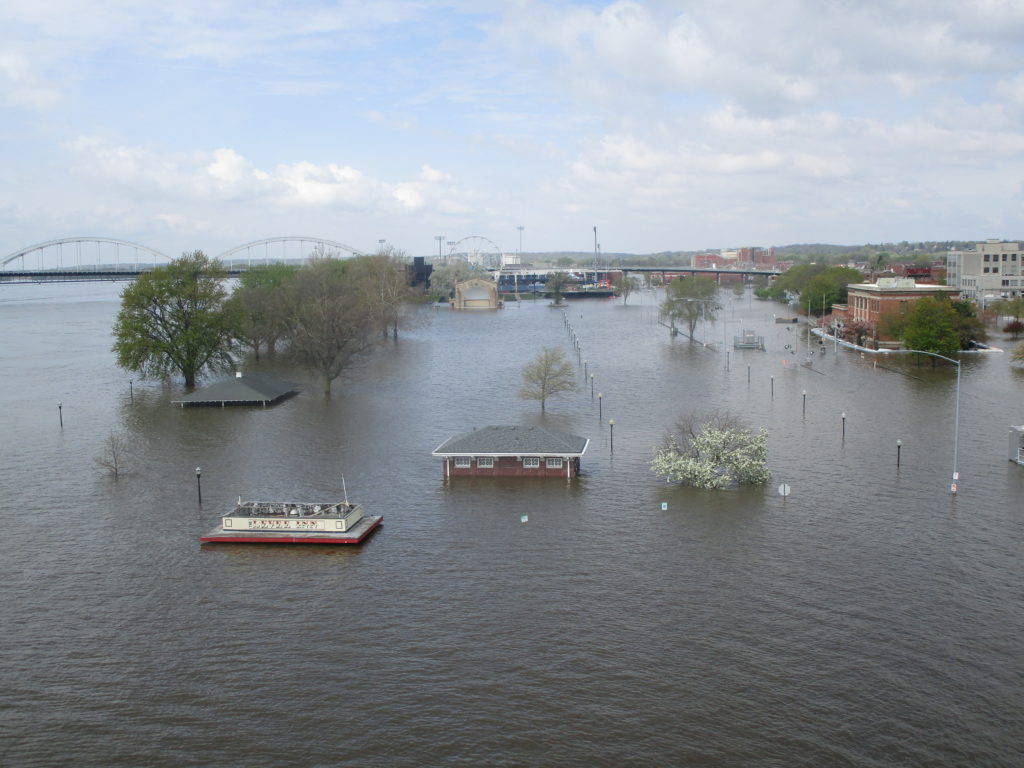 2019-12 – 0660 May 3rd – Taken from the upper deck of the Skybridge facing west towards LeClaire Park and Modern Woodmen Park Stadium beyond. Union Station on the right was flooded after river water rose through the ground inside the barrier area. 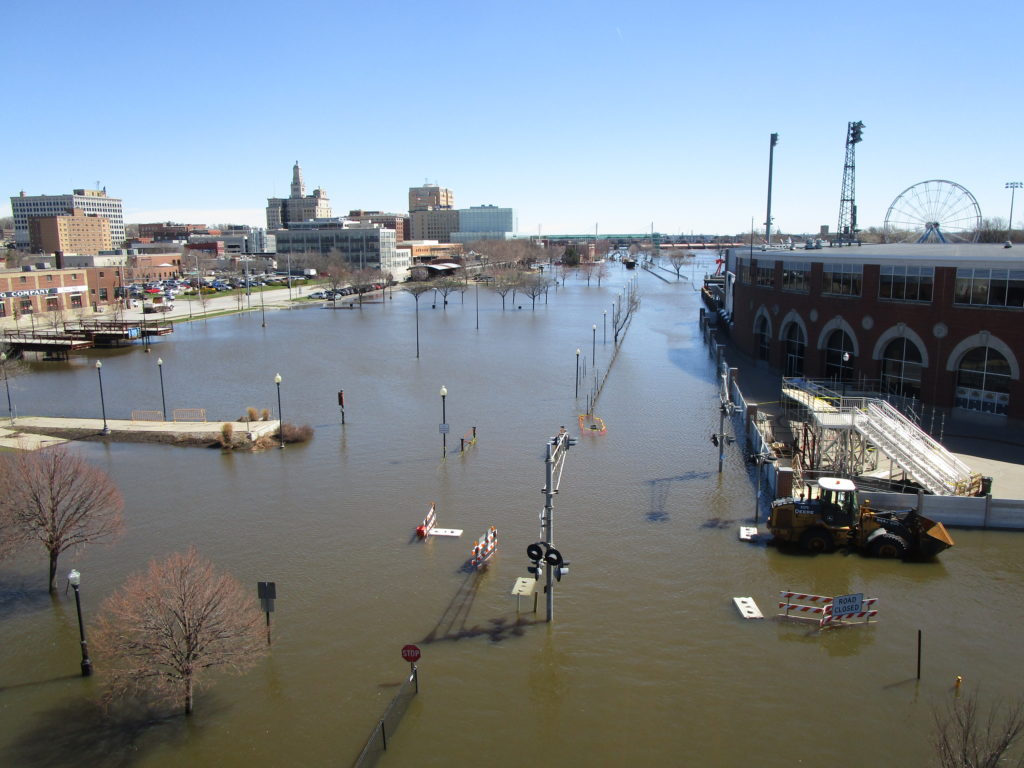 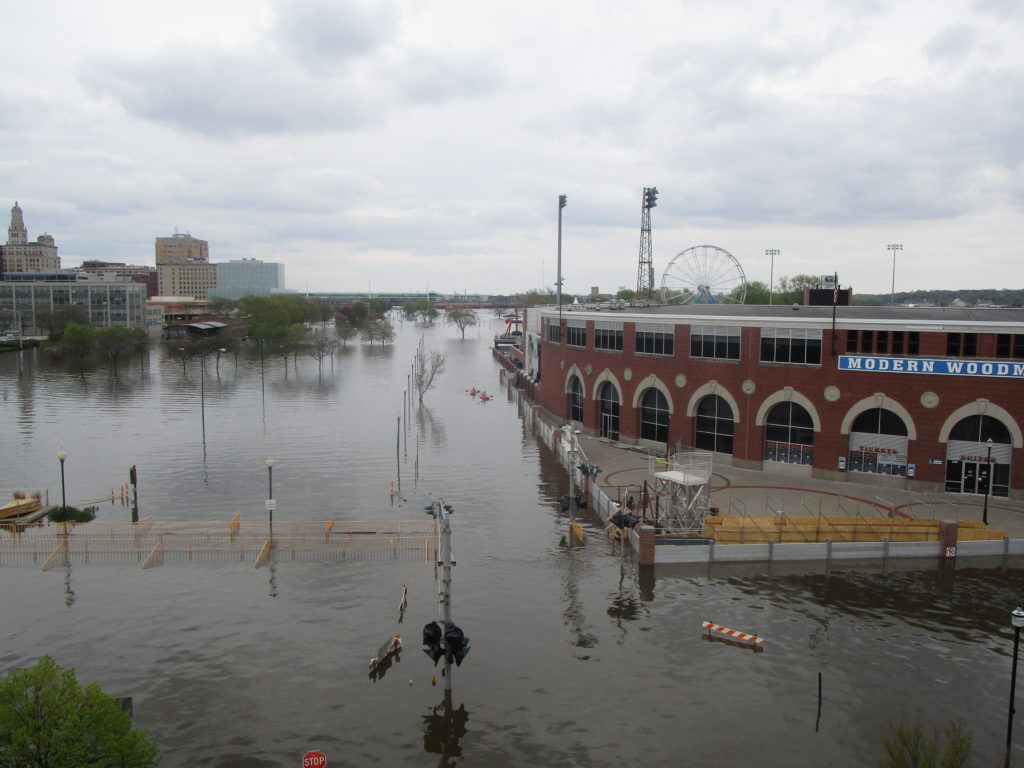 2019-12 – 0842 May 3rd – Modern Woodmen Park Stadium on right side, railroad track (with kayakers) in middle, and parking lots on left. The yellow railings were part of an elevated walkway installed to allow pedestrians to cross over recently elevated railroad tracks during the flood. 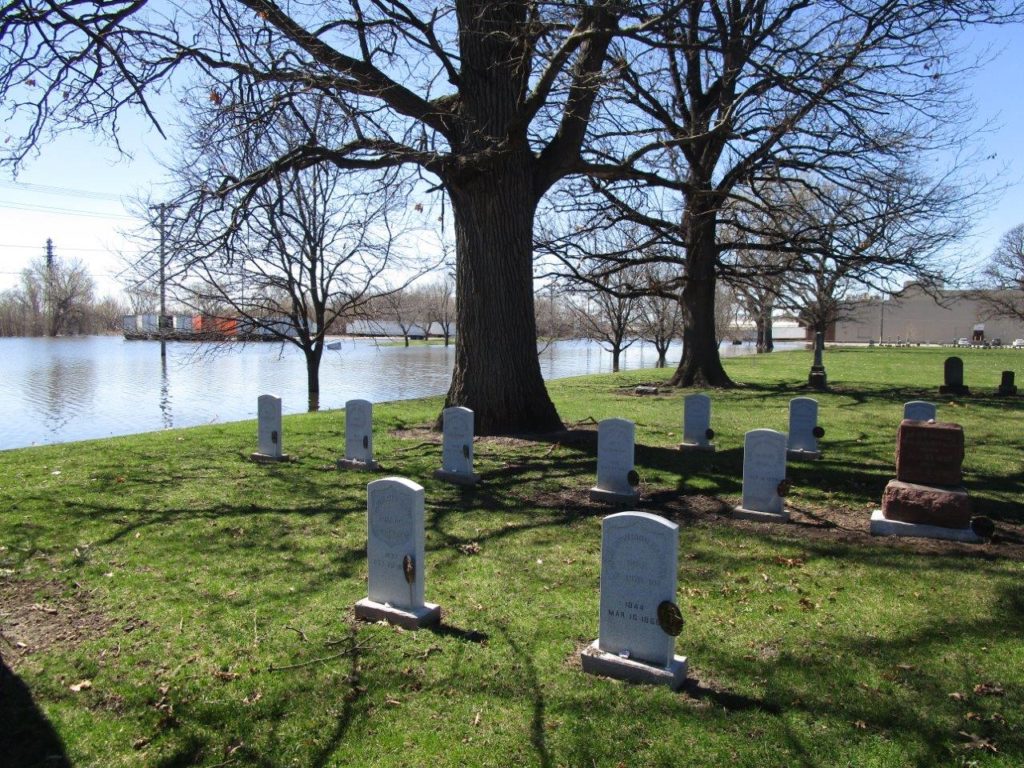 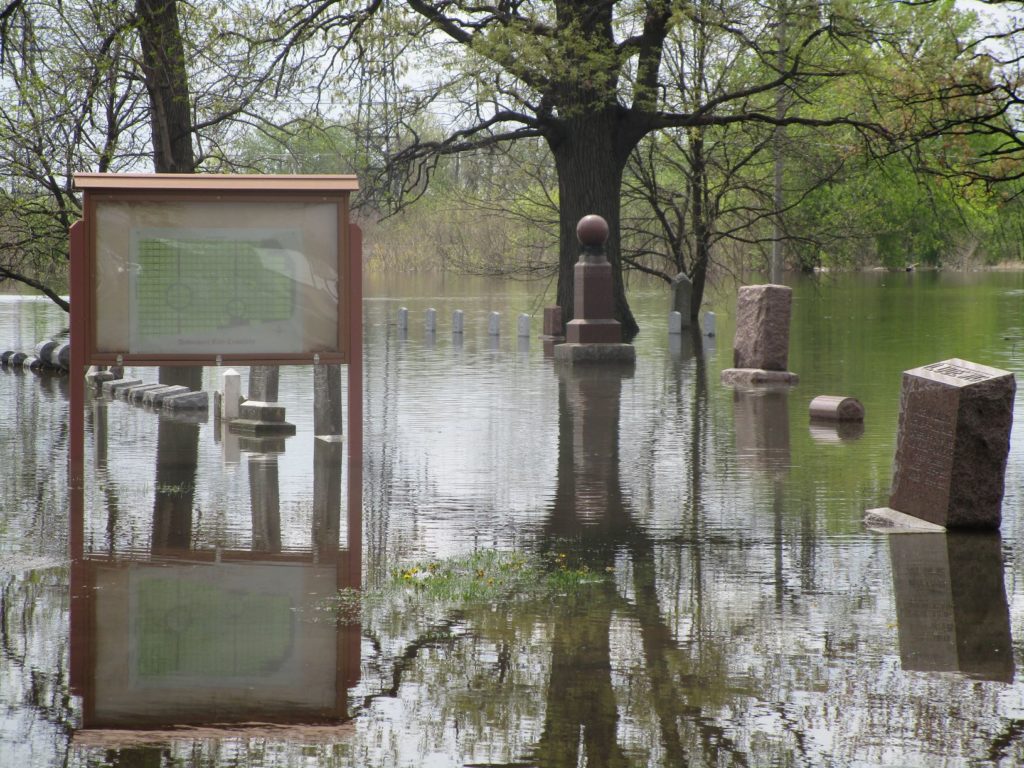 2019-12 – 0737 May 3rd – Due to flooding of City Cemetery staff was unable to recreate the photo taken on April 9th. The Civil War Soldiers’ headstones are visible next to the large tree in this photo. 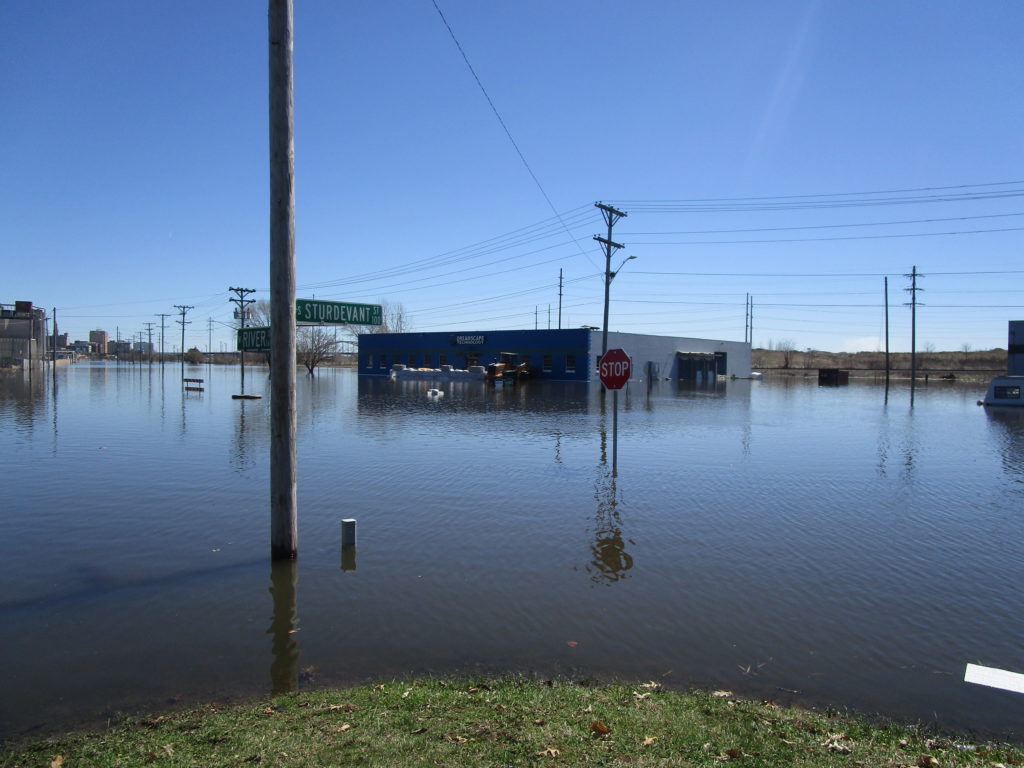 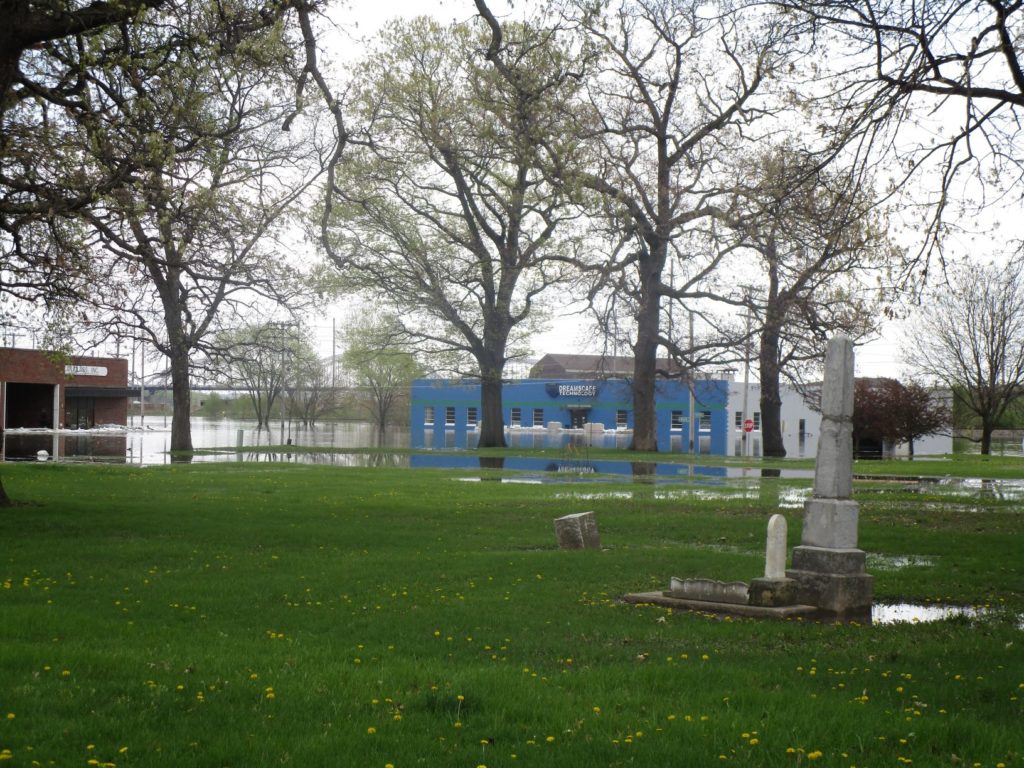 2019-12 – 0803 May 3rd – Davenport City Cemetery corner of Sturdevant Street and River Drive from a distance due to flood conditions. 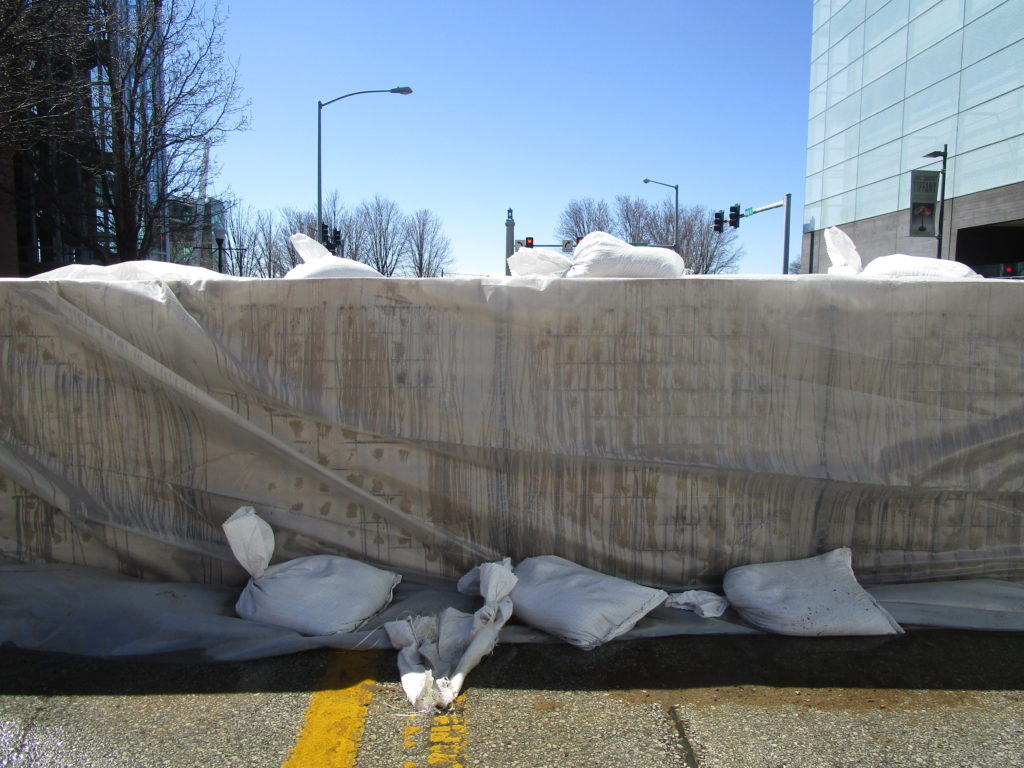 019-11 – 0447 April 9th – Close up of Hesco Barrier (since frequently referenced in flood photos) on Main Street facing south to Dillon Fountain. Figge Art Museum on right side of photo. 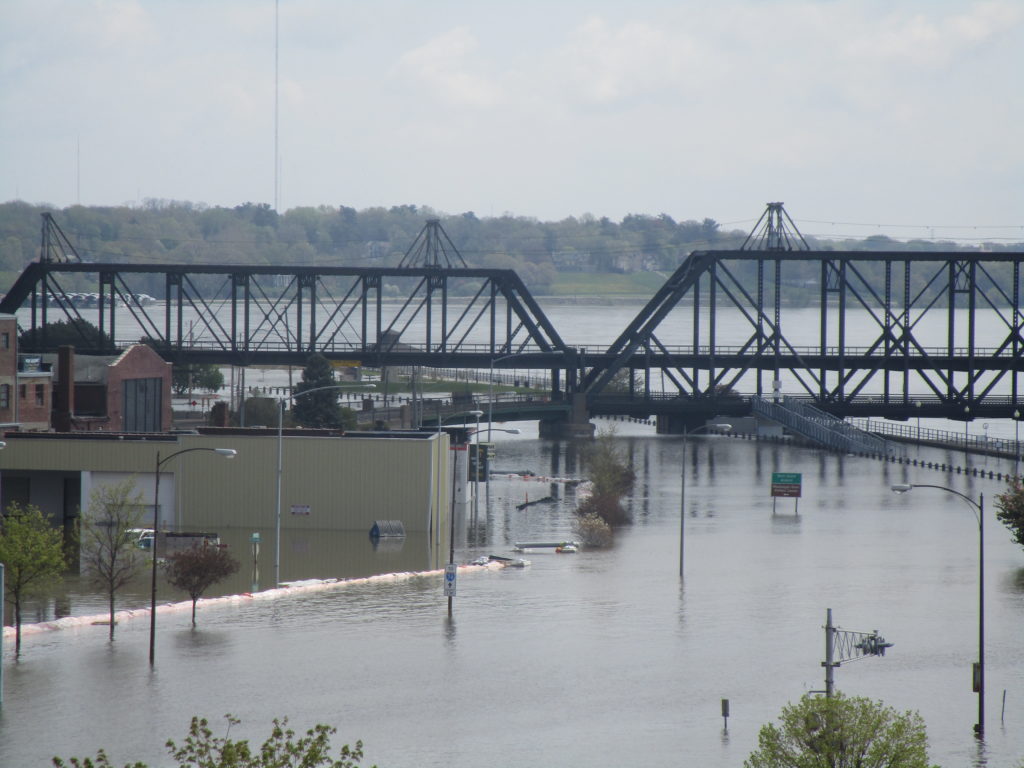 2019-12 – 0675 May 3, 2019 – Taken from Skybridge upper deck facing the Arsenal Bridge. Location of the long yellow color building is River Drive and Pershing Avenue. 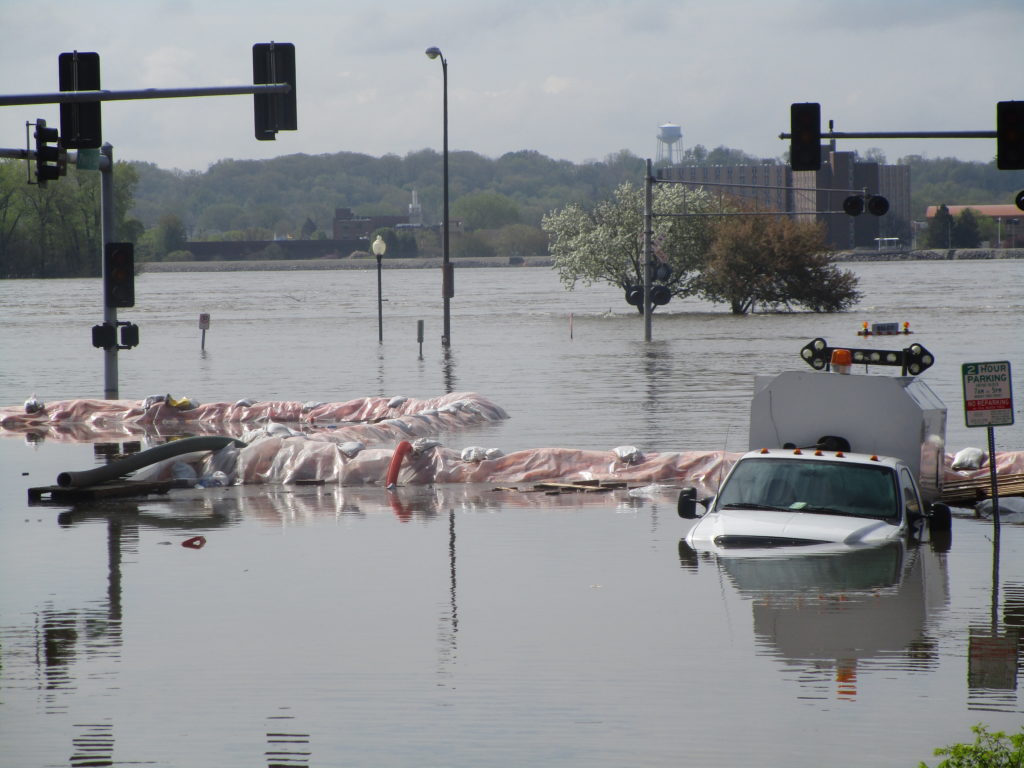 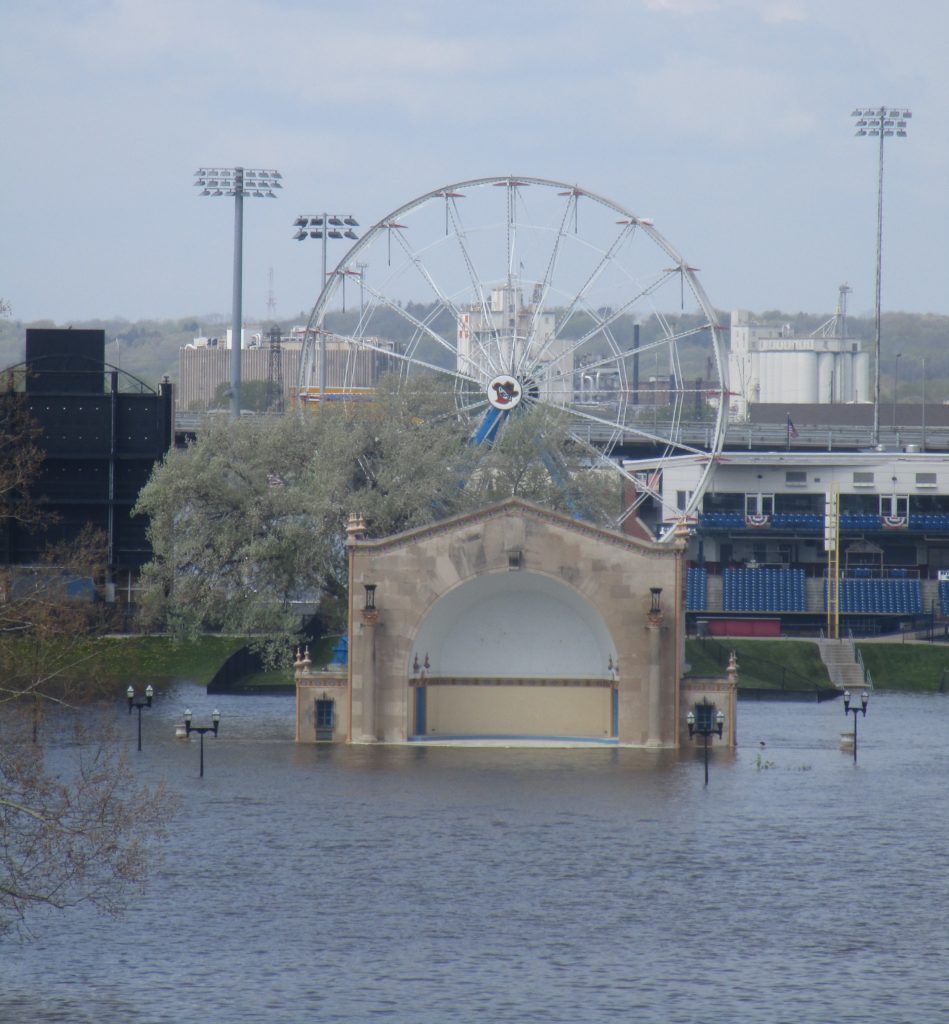 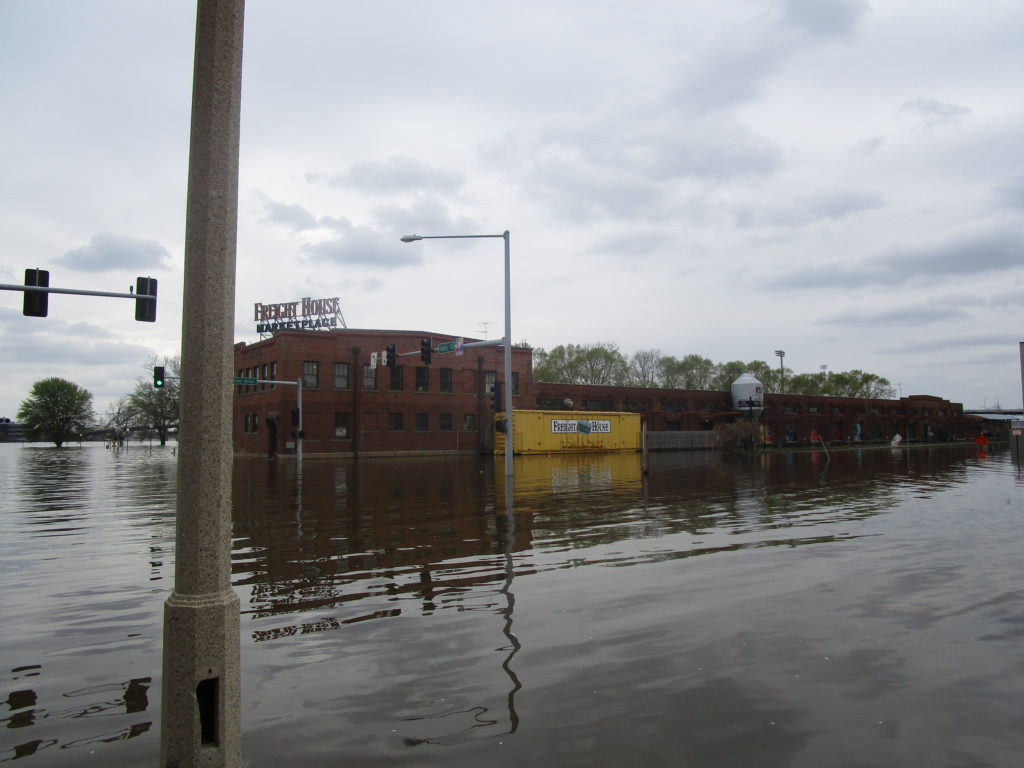 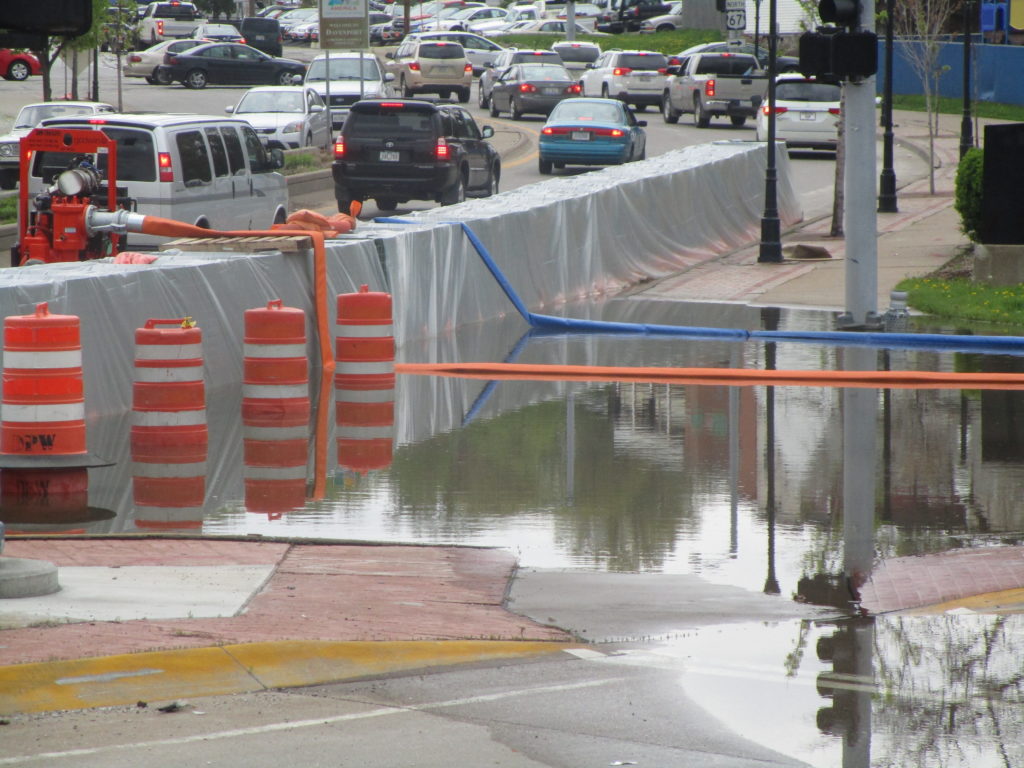 2019-12 – 0886 May 3rd – Hesco Barriers placed on either side of the Talbot Memorial Bridge (formerly Centennial Bridge) to prevent flood waters from closing the access to the bridge on the Davenport side.

As the water begins to recede we are hoping for a calmer late spring and summer. We admit to feeling just a little weather nervous at this time.

Bad Behavior has blocked 839 access attempts in the last 7 days.