40th Anniversary of the Blizzard of January 1979

This blog could easily have been titled “40th Anniversary of the Winter of 1978 – 1979: The winter that would not end“. We are sure if felt that way to many people in the Quad Cities.

In 2009, we wrote a blog on this event. It includes in-depth details with snow amounts and timeline of events. Please click here for that article.

We thought to revisit the anniversary of the blizzard of January 1979 this week as blogging has changed in the past ten years. We are now able to easily add photographs and images to our blog which was not the case in 2009.

We hope you enjoy this more visual look back at January 1979. We wonder if it will bring back memories for any of our readers.

The blizzard of January 1979 began on January 11th and lasted through January 19th. The area had already been hit with large amounts of snow and was overwhelmed by the additional inches and freezing cold temperatures that arrived starting on January 11th. 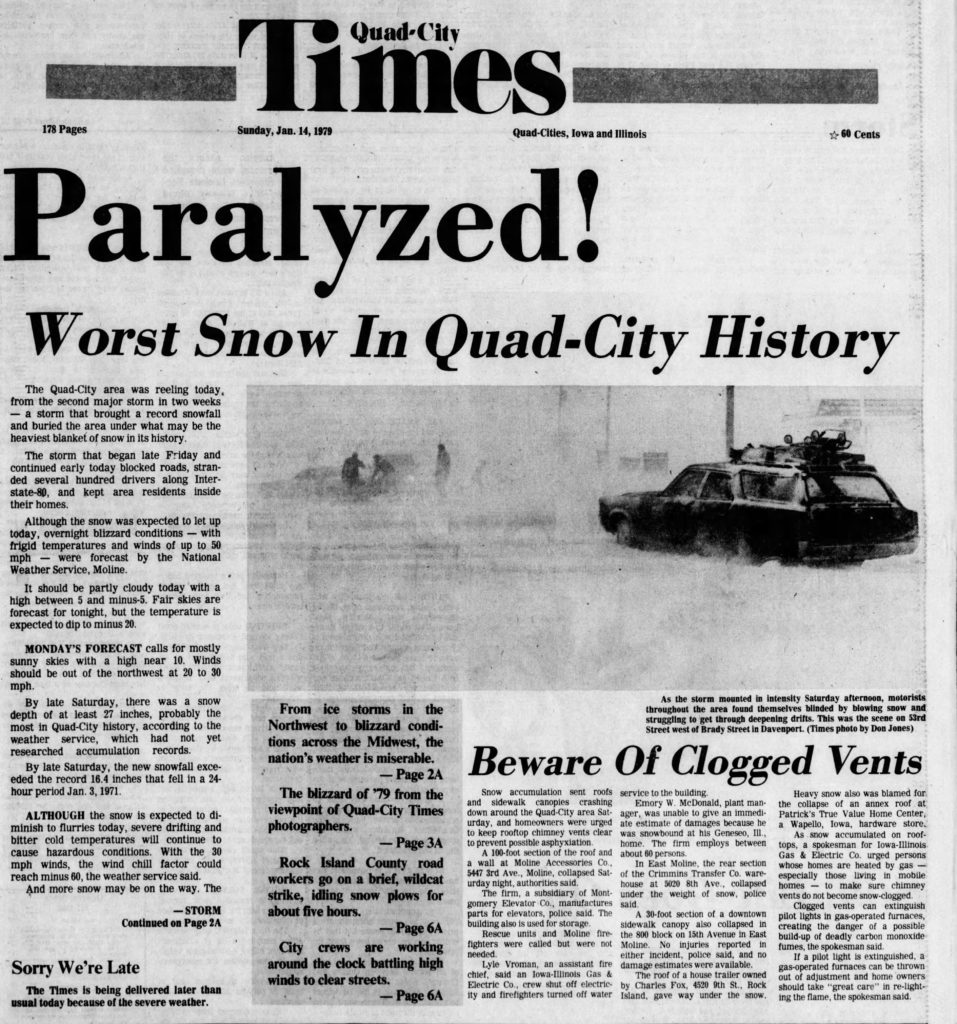 This photograph shows Davenport City Hall. The back of the photo is only marked January 1979. 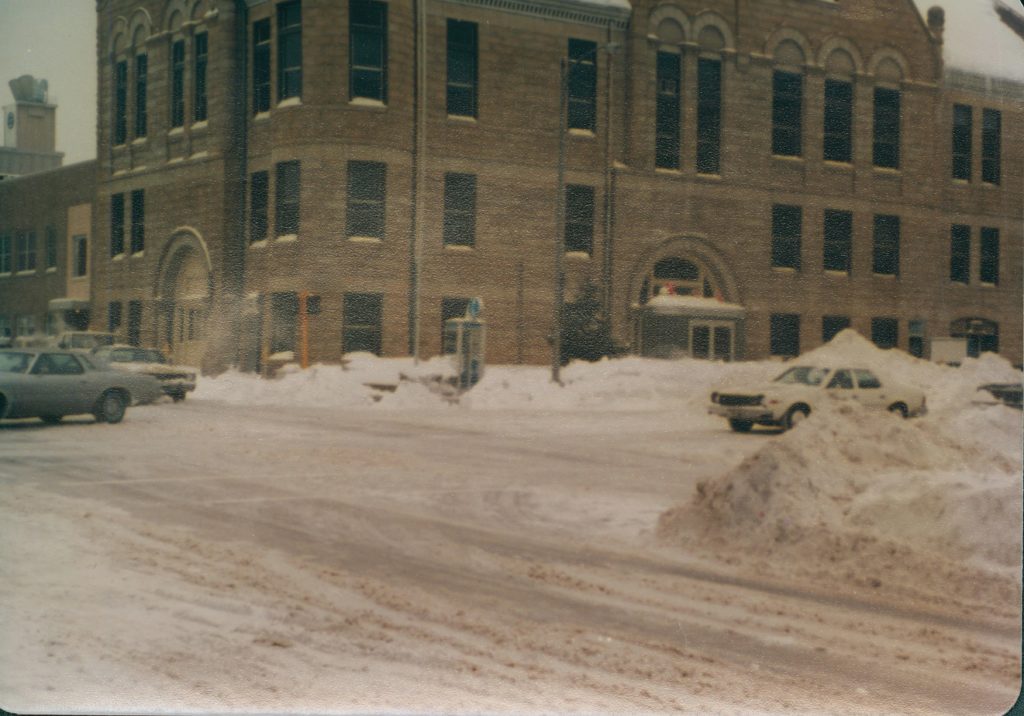 2008-20. City Hall in January 1979. Taken from corner of Harrison and 4th Streets. A fun observation is the phone both on the corner near City Hall!

Cars had to be abandoned on the road during the worst of the storm. Snowmobiles were used to rescue drivers trapped in the snowy conditions. 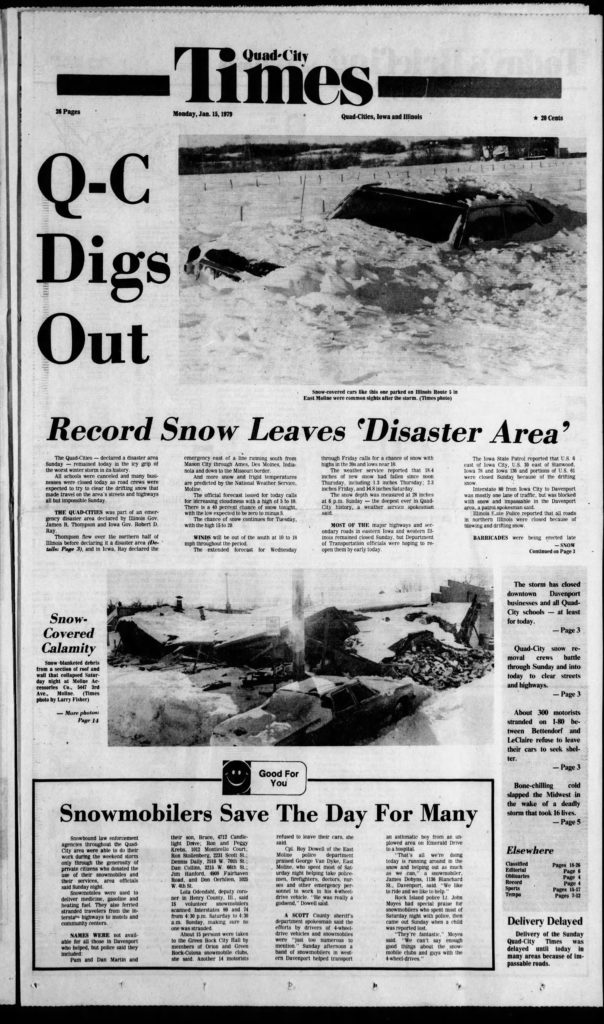 Our next photo provides a look west down 4th Street in downtown Davenport. The tall brick building on the right side is now gone and the current Davenport Police Department stands in that location. The buildings on the left side still stand, though the used car lot is now a parking lot. 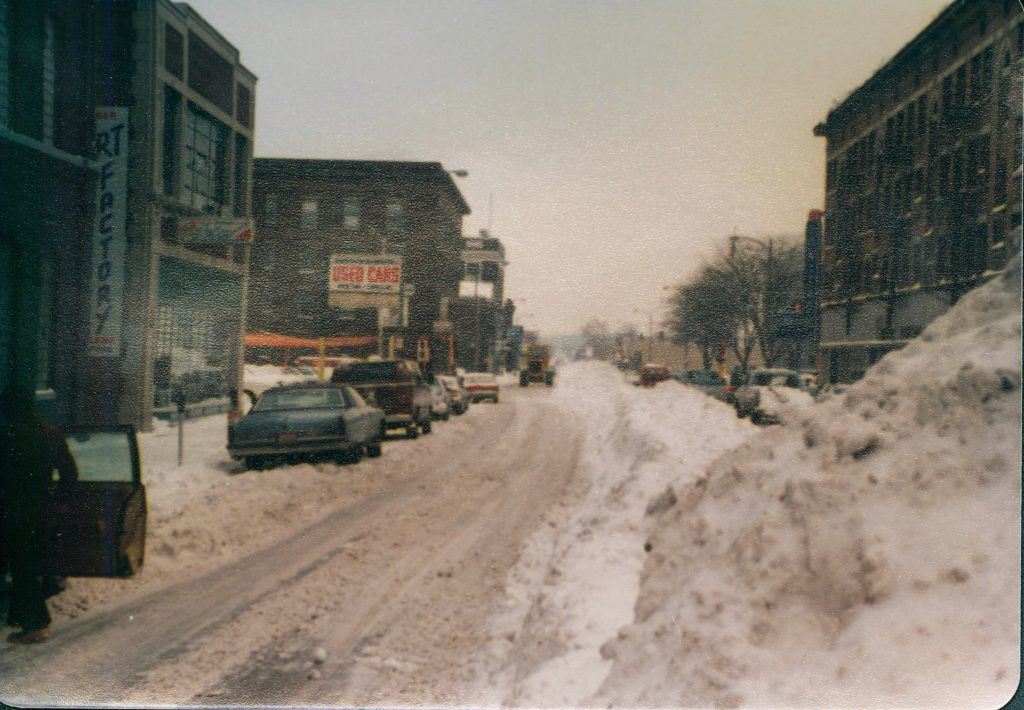 2008-20. Corner of 4th and Harrison Streets looking west. Plows had no way to keep up with the snow so mounds were pushed into the middle of the road to keep cars moving. The snow was then piled into dump trucks that dumped the snow into the Mississippi River. There was no where else to go with it. January 1979. 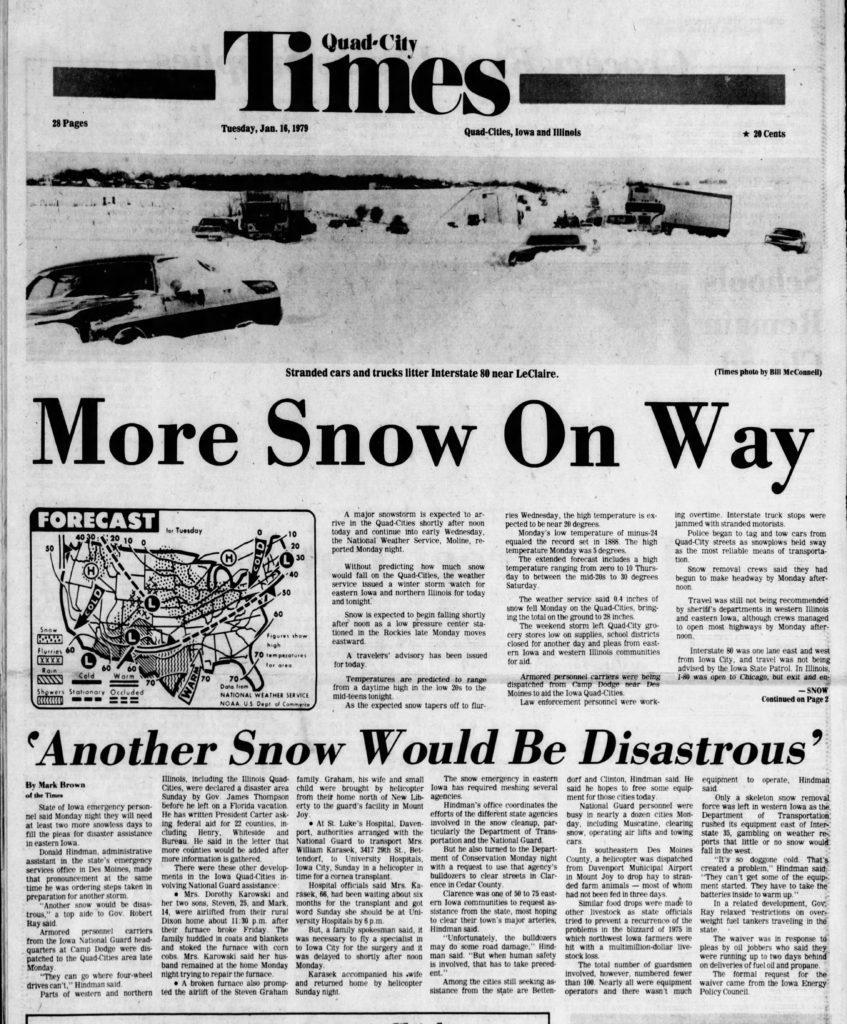 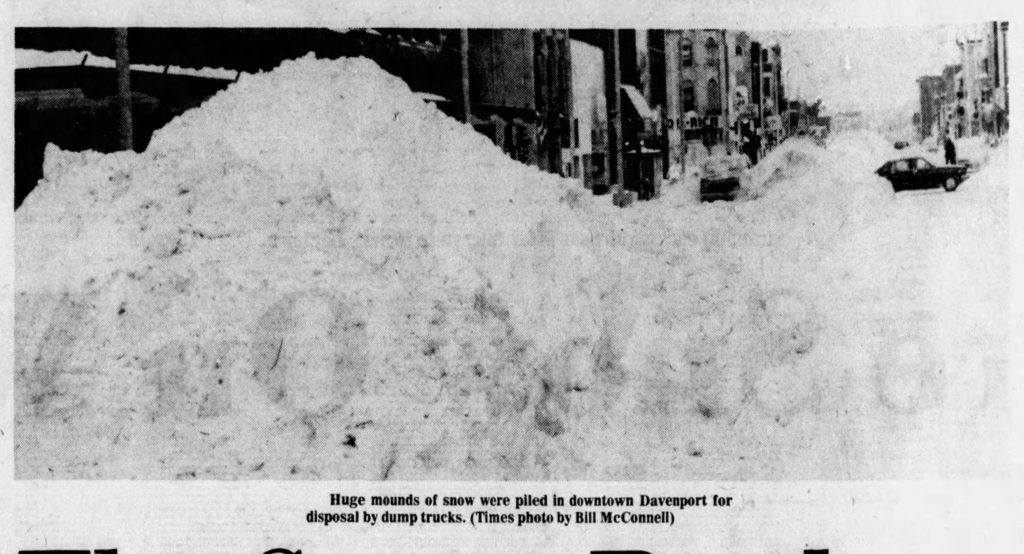 By the end of the blizzard, snow covered cars, reached the gutters of one-story houses, and caused roofs to collapse under the weight of the snow. 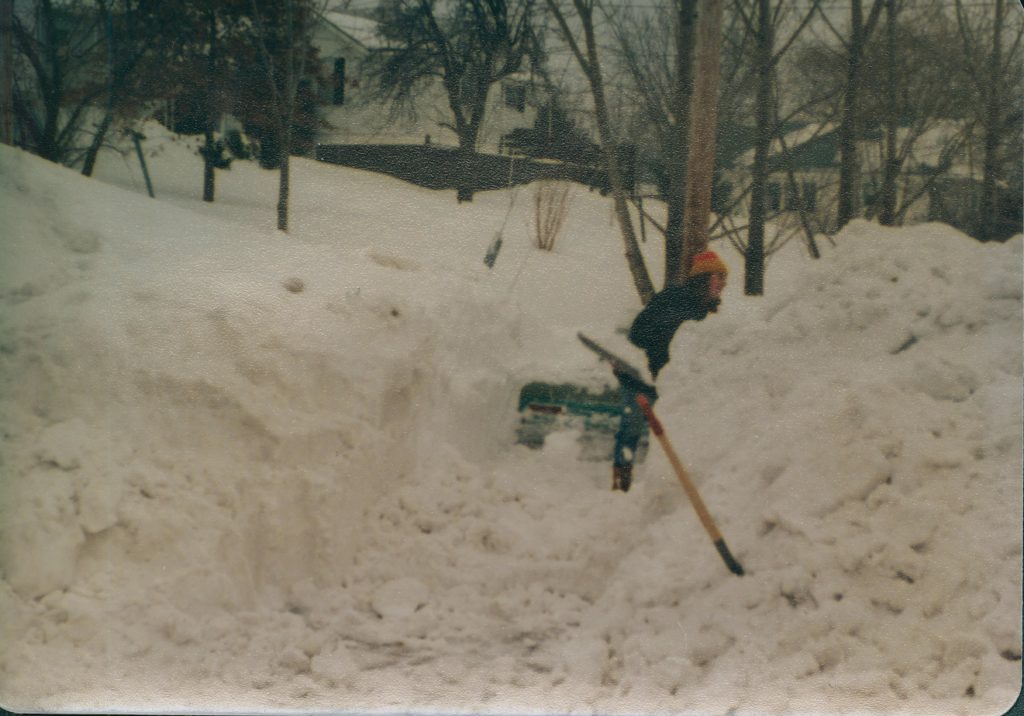 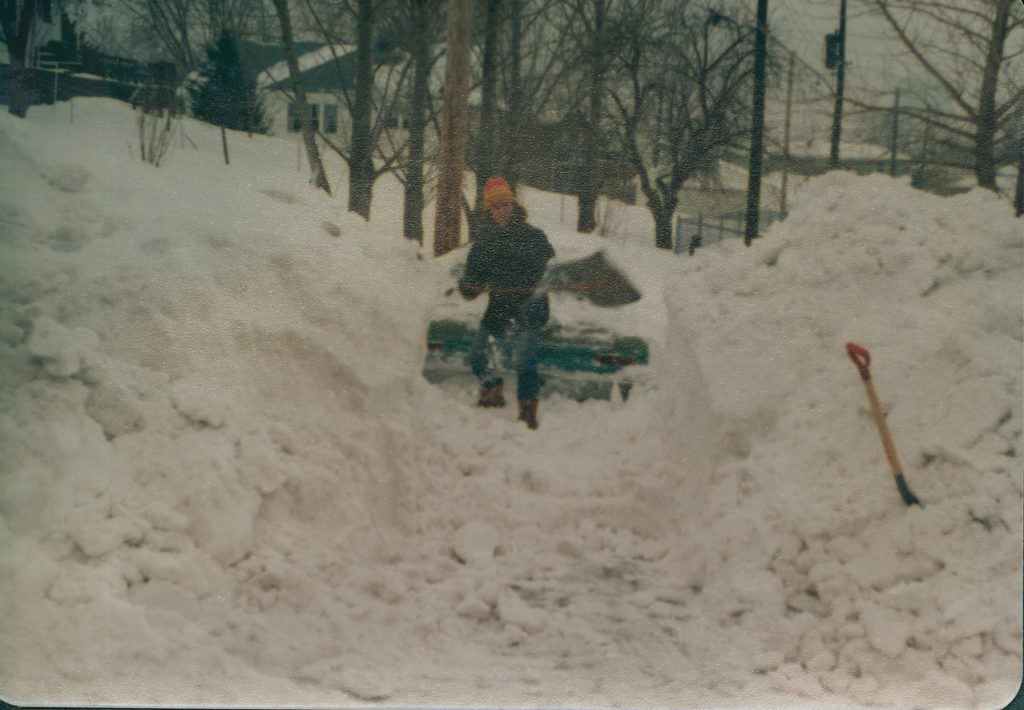 2008-20. Some progress made as the car is more visible. After all the digging out, more snow would fall in January, February, and March. Photo taken January 1979.

We also hope the unidentified woman in the last two photographs managed to dig her car out before February!

Like Loading...
This entry was posted in Local History and tagged Blizzard, Blizzard of 1979, January 1979, Record Weather, weather, Winter. Bookmark the permalink.