Researching the home built by Antoine LeClaire on the site of the Black Hawk Treaty is quite a challenge.  There have been at least 3 different buildings in Davenport called “The LeClaire House.” There’s LeClaire’s 2nd home, the mansion built in 1855 and still standing at 630 E 7th Street, and The LeClaire House Hotel, the first hotel in Davenport, built in 1839 on 2nd Street, now site of The Current ~ Iowa.

The house was restored, rebuilt, and moved several times.  By the time the Rock Island Railroad had it restored and presented to the D.A.R. to use a historic site in 1925, there was nothing left of the original home built by LeClaire in 1833.

From it’s original location at the site of the Black Hawk Treaty to it’s final location on the grounds of the Davenport Public Museum, here’s a timeline of events with pictures and maps:

1832 Sep 21 – Treaty with the Sac & Fox tribes signed. Chief Keokuk set aside a section of land on which the treaty was signed and gave it to Marguerite & Antoine LeClaire on condition that they build their permanent home on the site. 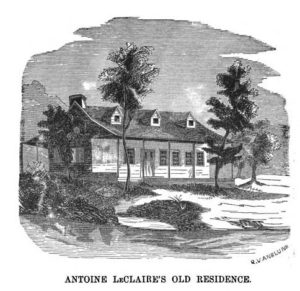 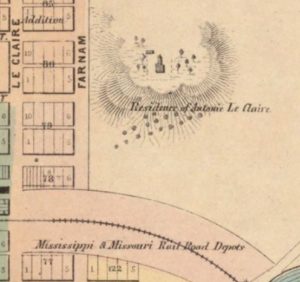 1833 Spring – Original home erected at 5th & Farnam, on the spot where Gen. Scott stood during the treaty. Antoine’s nephew Joe said the house was built of hewn logs, then boarded over, was 1 ½ stories, with 3 gables, and 3 rooms upstairs (for Joe LeClaire, servants, and a guest room).  LeClaire’s own writings describe it as having 3 rooms on the 1st floor that were 20 square feet each, so the house was 60 feet long: “It looked like a bungalow with great caves and quaint little dormer windows and portico in the front and rear.”

1853 Sep 01 – LeClaire gave the home to the Mississippi & Missouri Railroad to use as the first depot west of the Mississippi. The home was occupied by Benjamin F. Carmichael, the railroad contractor.

1855 Dec 07 – The house was converted into a passenger depot by the Mississippi & Missouri Railroad.  A platform was built between the house and the track.  The depot had a room for ladies, another for gentlemen, and a third for the use of the freight agent.

1856 Jul 26 – The New Freight Depot was built in the garden of the LeClaire House/Passenger Depot.

1866 Jun 12 – The Chicago, Rock Island,and Pacific Railroad Company in Iowa (Pacific No. 1) was incorporated “for the purpose of purchasing, acquiring, and owning the railroad now built by the Mississippi and Missouri Rail Road Company, together with all and singular the railway lands used and occupied for right-of-way.”

1871 Dec – The new Government Bridge changed the line of the road through the city and necessitated the removal of the passenger depot. A newspaper article from October 26, 1872 states that the LeClaire’s old residence was only used as a passenger depot for “…a year or so, when the present passenger depot took its place.” 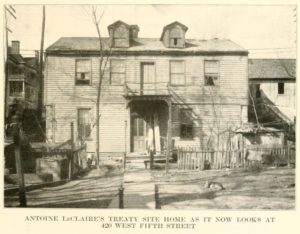 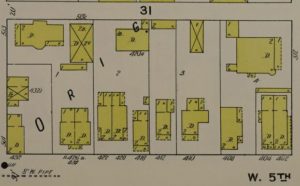 1872 Dec 09 – A newspaper article on this date states “…before many days tracks will occupy the space once occupied by the old passenger depot.”  Contractor Louis Arnould moved it to the rear of 418-420 W. 5th Street, on an alley near 5th & Scott Streets. The roof was replaced; a new foundation, basement, and second story attic were added, leaving only the upper portion intact.  There were several efforts at restoring and rebuilding in later years.

1923 Oct 03 – A resolution of intention to condemn the house was passed by the Davenport City Council.  Mrs. Dorothea Vollmer, the owner of the house, asked that the action be delayed. 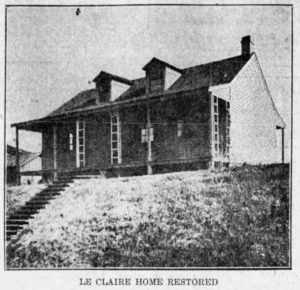 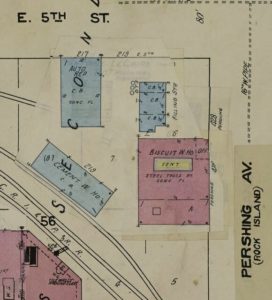 1925 May – Restored by the Rock Island railroad and moved to 5th & Pershing Streets. Col. Edgar R. Harlan, curator of the Historical, Memorial, and Art Department of the State of Iowa (which merged with the State Historical Society in 1974), supervised the move. The Central Engineering Company of Davenport rebuilt it “…as nearly as possible to its original condition…” and presented it to the Hannah Caldwell Chapter of the DAR. 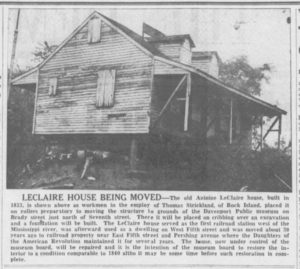 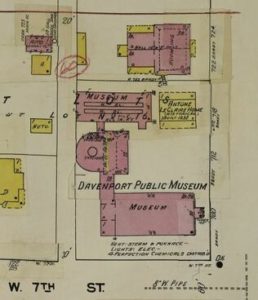 1944 Oct – Moved to the lawn of the Davenport Public Museum at 7th and Brady Streets.  This building was only 38 feet long and the timbers were cut with a circular saw (per Des Moines architect in 1857).

1965 Jan – Razed at the same time as the Davenport Public Museum building.  What was left was an upstairs addition to the original LeClaire “Treaty House” at the turn of the [20th] Century. 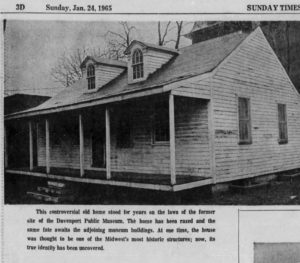 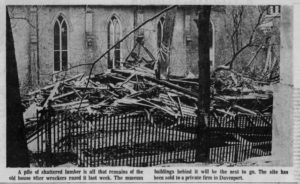 Hayes, William Edward. Iron road to empire: the history of 100 years of the progress and achievements of the Rock Island lines. New York: Simmons-Boardman, 1953.

“Re-Enact City’s Founding in LeClaire Memorial Dedication.” The Davenport Democrat and Leader 24 May 1925: 22.

“The Oldest House In The City Of Davenport.” The Davenport Democrat 20 September 1903: 5.