Breaking the Cornerstone: Demolition of the Carnegie Library

Once the largest Carnegie Library west (or north) of the Mississippi River, in the 1960s the Davenport Public Library faced an unsettled future due to developing structural problems. In the early 1960s, the Library Board requested funds to build a new library to meet the growing needs of the community, such as the increasing interest in children’s services. Due to the design and layout of the building, the services of the library were stymied, thus calling for a solution. The request for funding the construction of the new library building was not accepted, but the library board and city council negotiated other plans to assist the library. The first attempt to ameliorate these issues was the construction of the Children’s Library Wing as discussed in our first blog in this series, Main Street Library’s 50th Anniversary Series: The Children’s Library Wing. 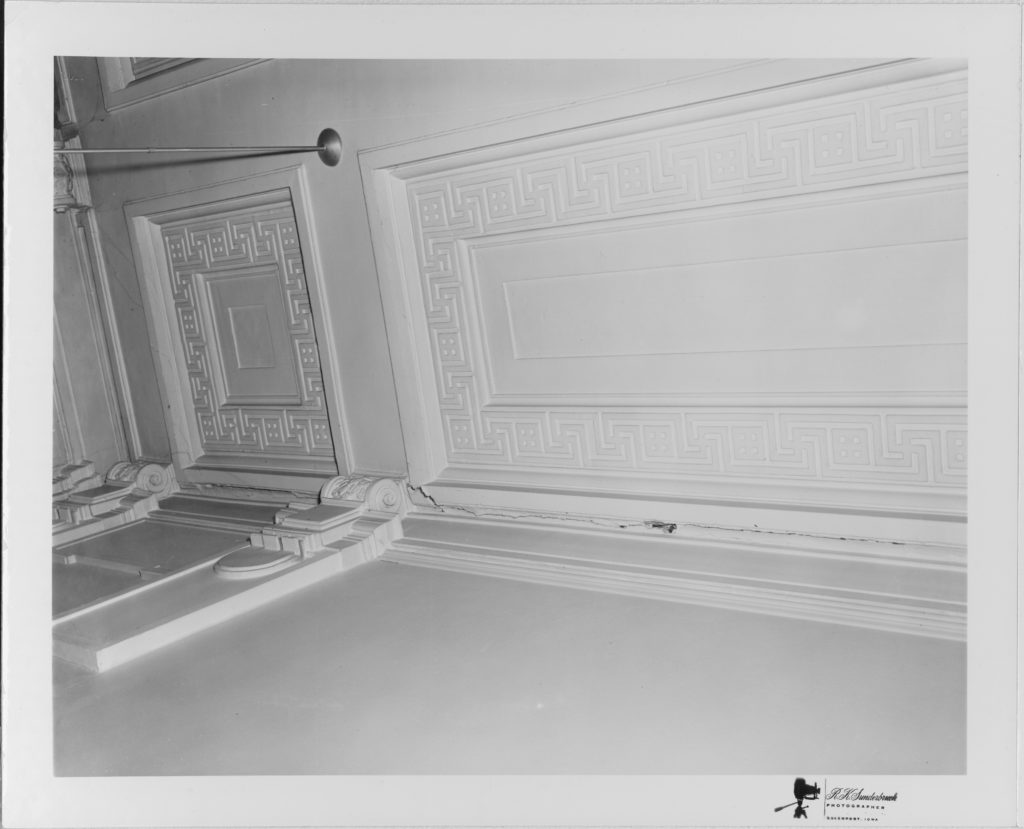 Image of the Carnegie Library from DPL Archives. 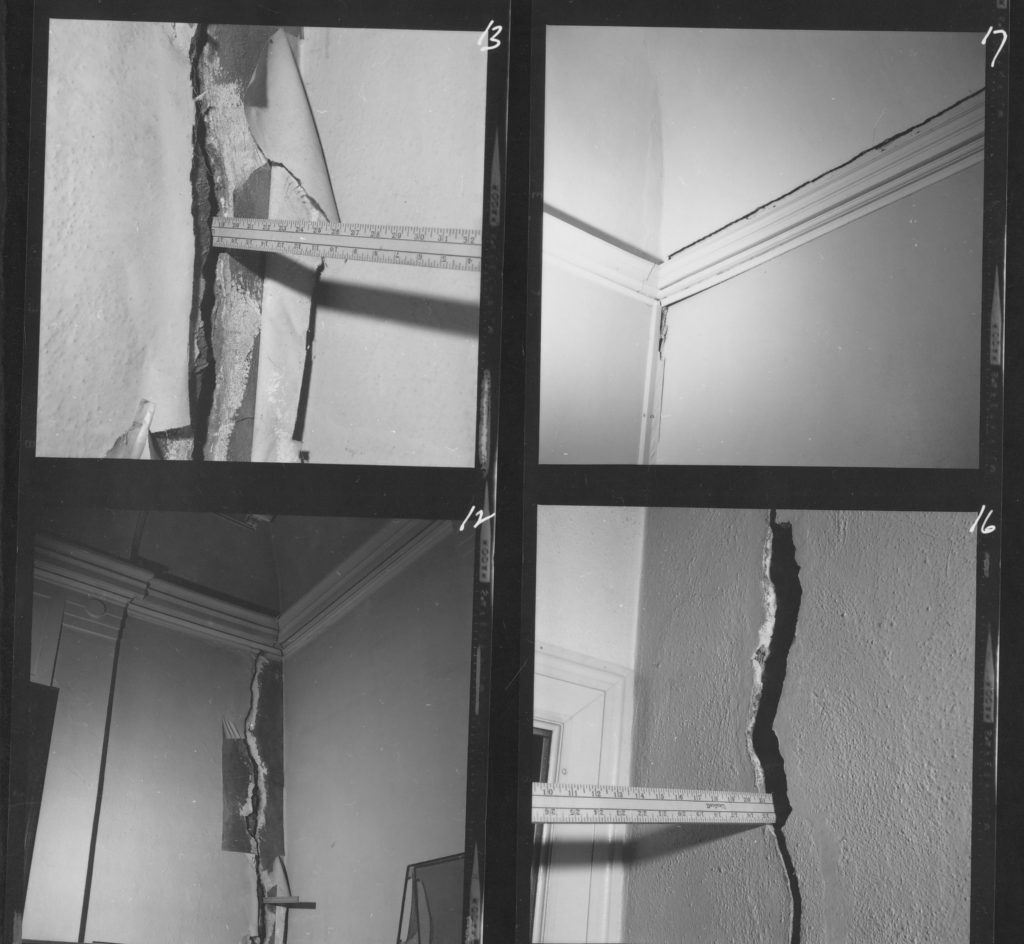 Images of the Carnegie Library from DPL Archives.

Before, during, and after the construction of the Children’s Wing, the Library sustained several cracks in the walls and along the ceiling joints. Fissures in the walls weren’t the only problems the library had to contend with. Collapsing skylights and severe leaks also plagued this 60-year-old building. This spurred the library board to submit another proposal for a new building. The proposal was accepted, thus plans for a new library were underway. 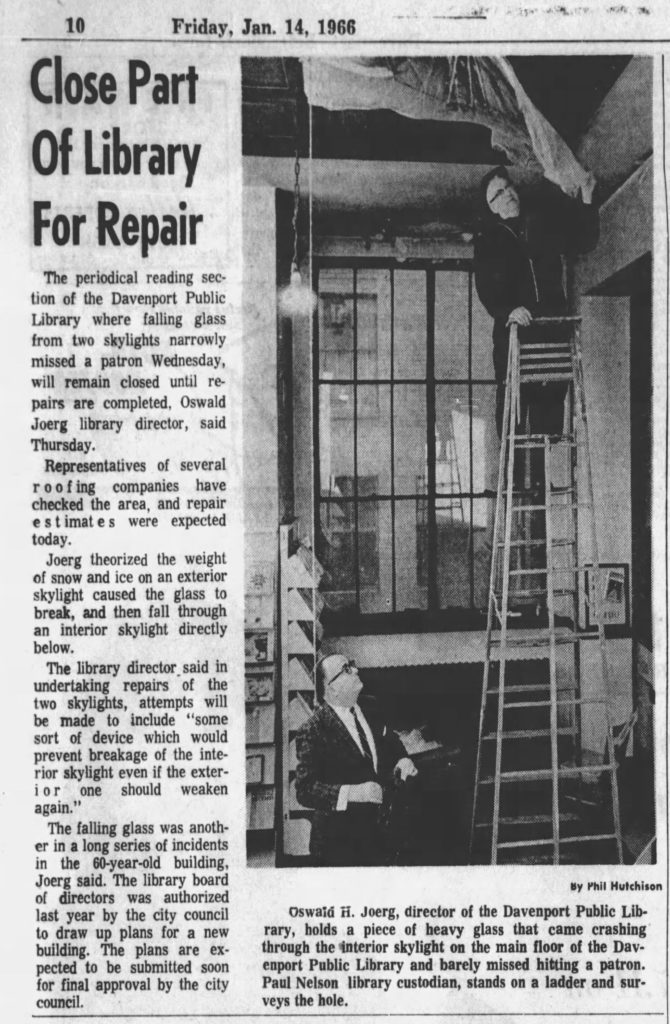 Over the course of the next two years, the Davenport Public Library vacated its premises to move to its temporary location at the former Hill’s Department Store, underwent a major demolition, and built a new library facility to meet future needs. 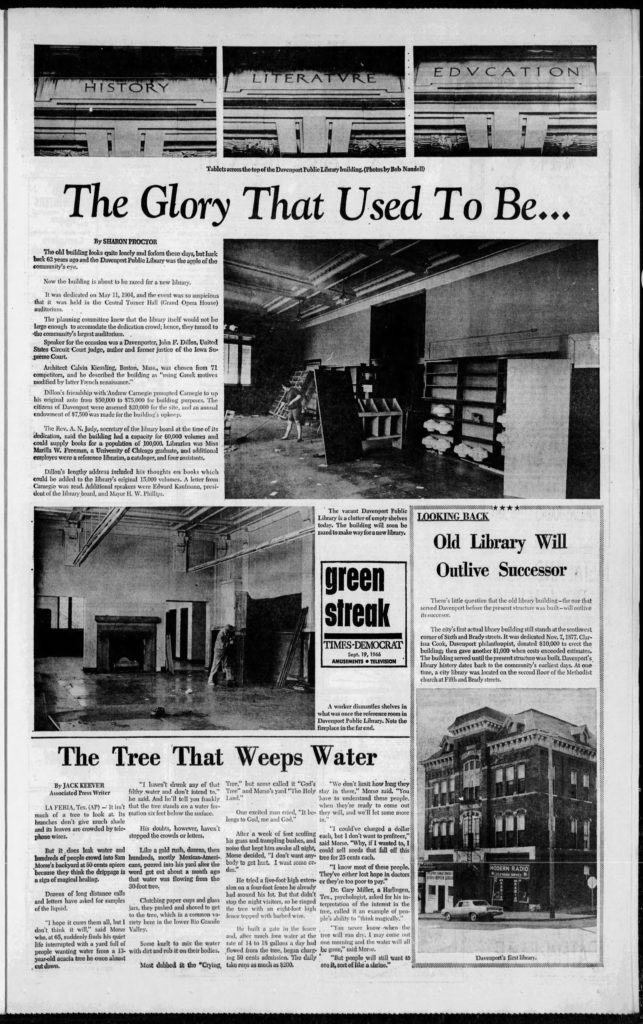 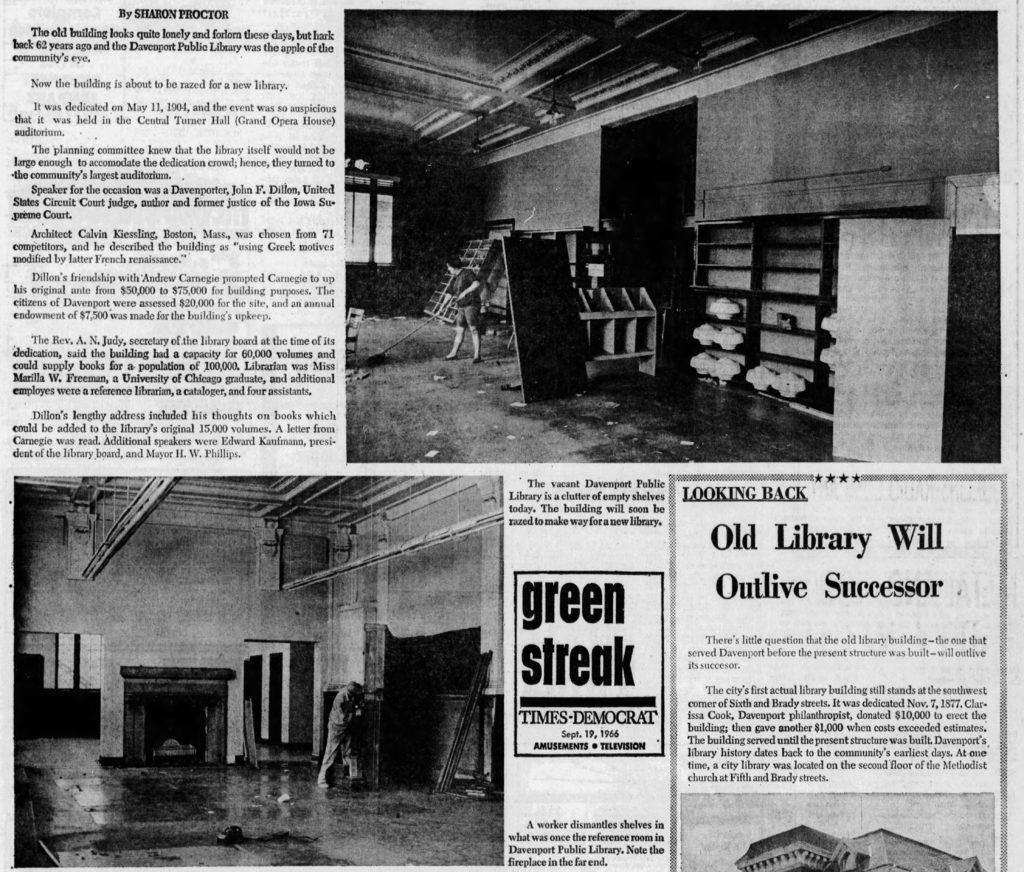 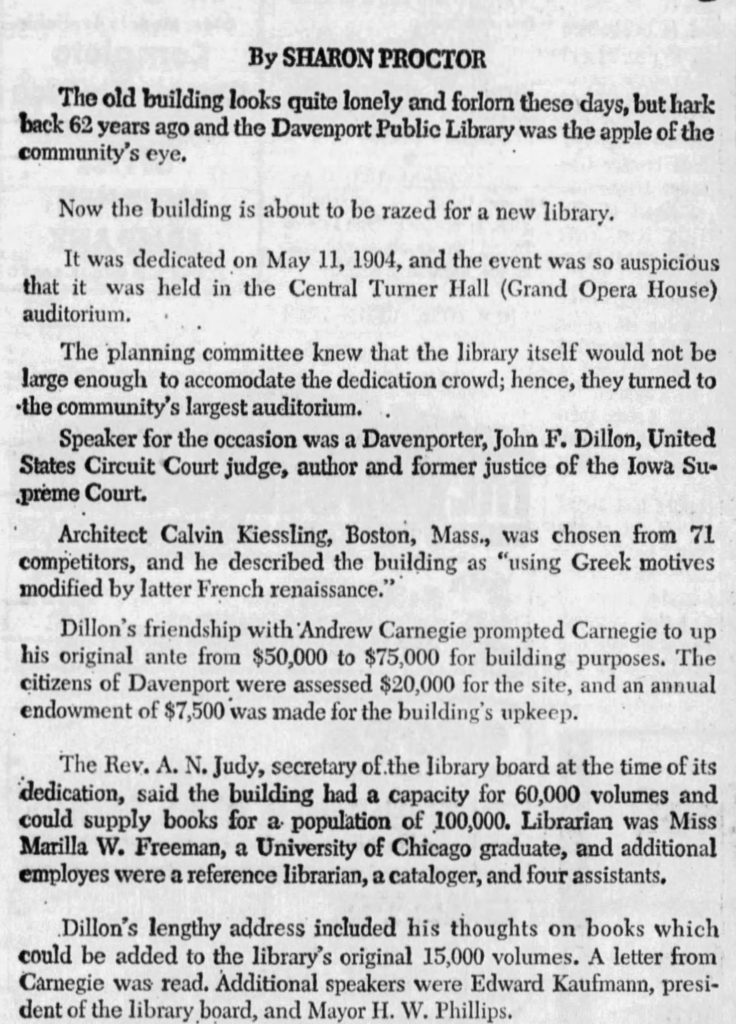 In November of 1966, the demolition of the Carnegie Library began. Removing the library was expected to take about three weeks. Debris from the demolition was used to partly fill the Lindsay Park lagoon in the Village of East Davenport. 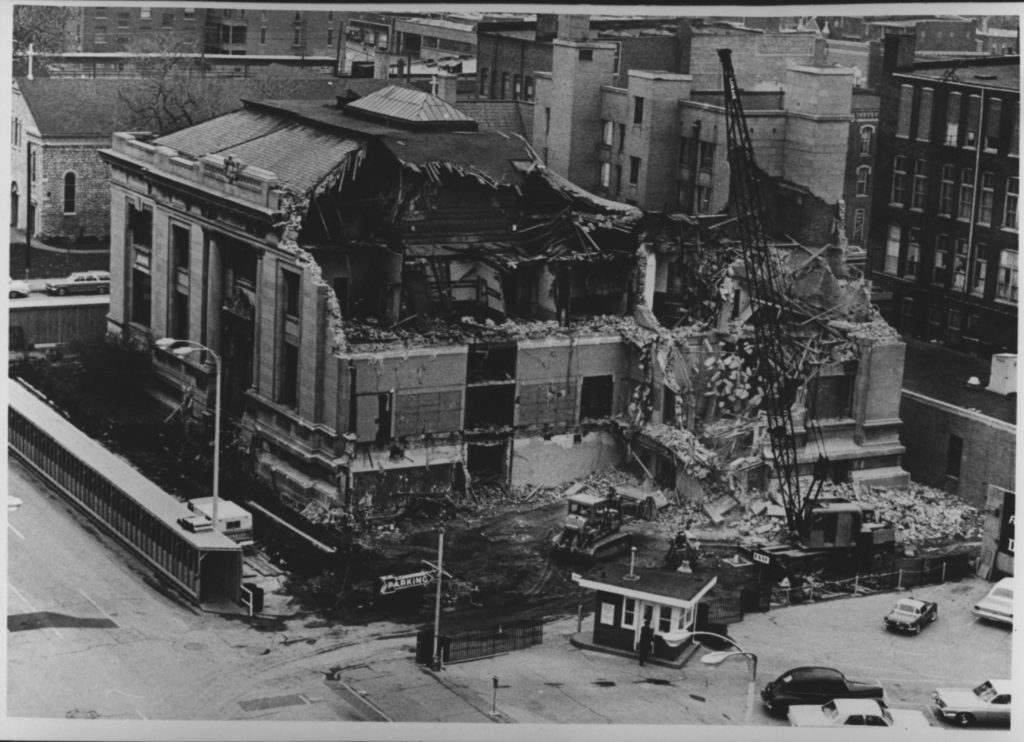 Image of the demolition of old Carnegie Library from the Davenport Chamber of Commerce Photograph Collection at the Richardson-Sloane Special Collections Center, Davenport Public Library.

In between trying to salvage the library to admitting the building needed to be replaced, a copper box filled with treasures of library history, Davenport city council documents, a 1908 Vogue magazine, and more was found during the demolition process. Some of the items recovered from the copper box are now part of our Library Archives. 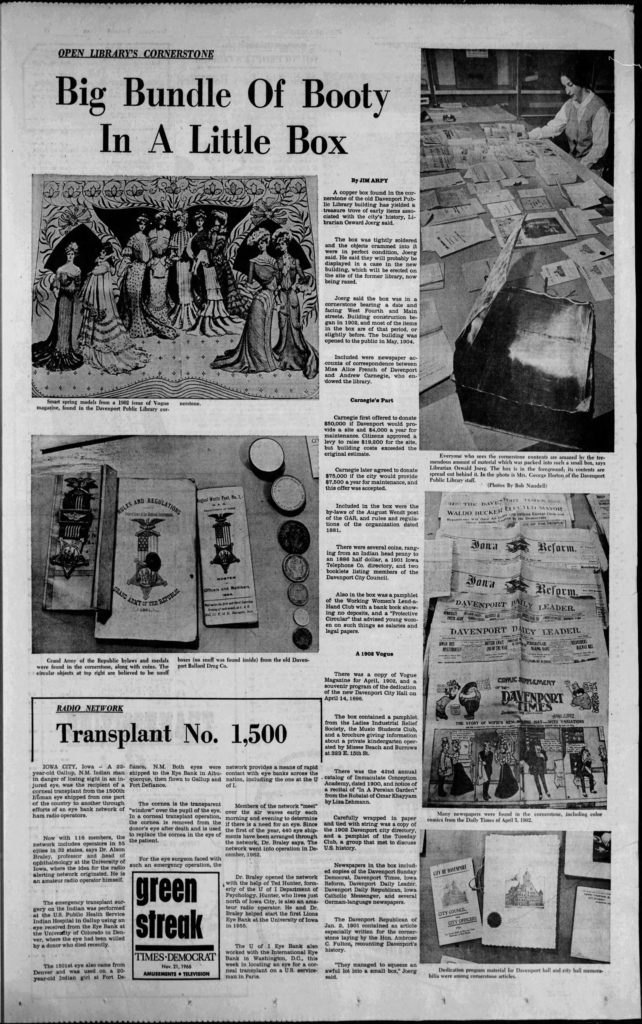 Similar to other cornerstones, this cornerstone was placed in a cavity in a foundational corner stone of the building. In most cases, cornerstones were not meant to be discovered for many years, but they function as a time capsules capturing the time when the building was under construction.

Bad Behavior has blocked 630 access attempts in the last 7 days.