Living Memory History: The Flood of ’93

2018 marks the 25th anniversary of the June/July flood of 1993 (which still stands in first place as of this blog for historic crests at Lock and Dam 15). We thought we would take a moment to look through not only photos of the flood, but the aftermath as well. 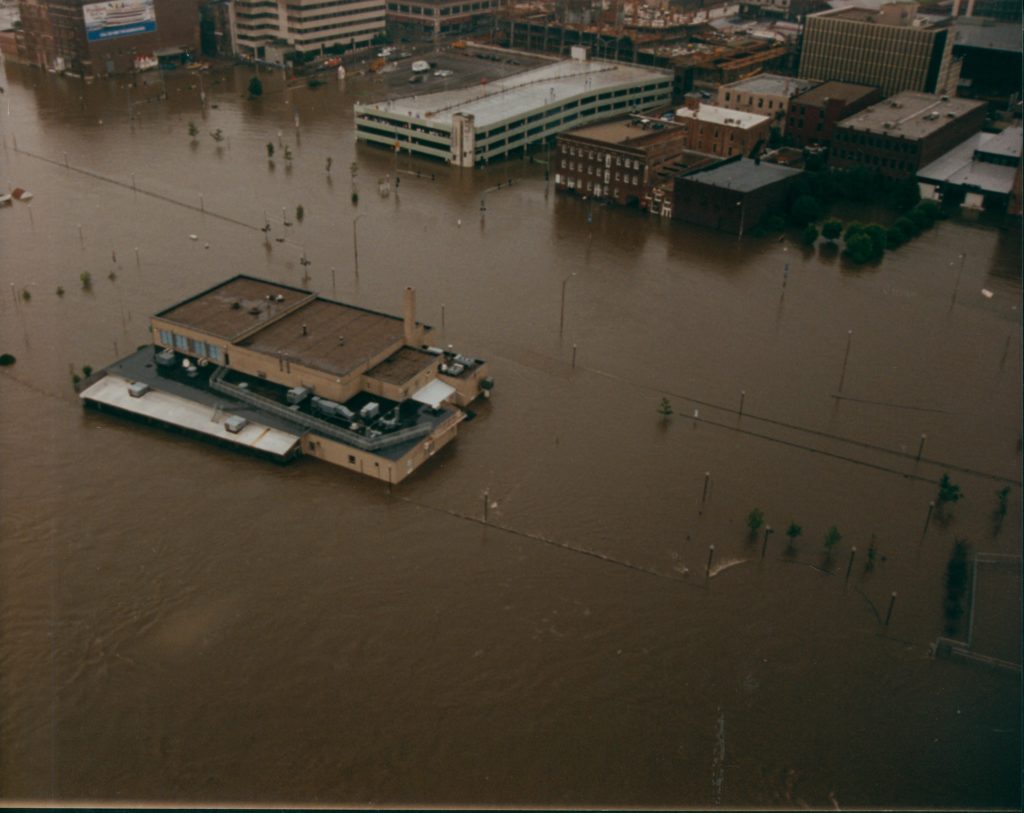 Photo courtesy of the Davenport Police Historic Association. The building in the middle of the aerial photo was The Dock Restaurant (now demolished). The bottom of the photo is the river bed. From The Dock to the upper portion of the photo should be land including railroad tracks and River Drive.. 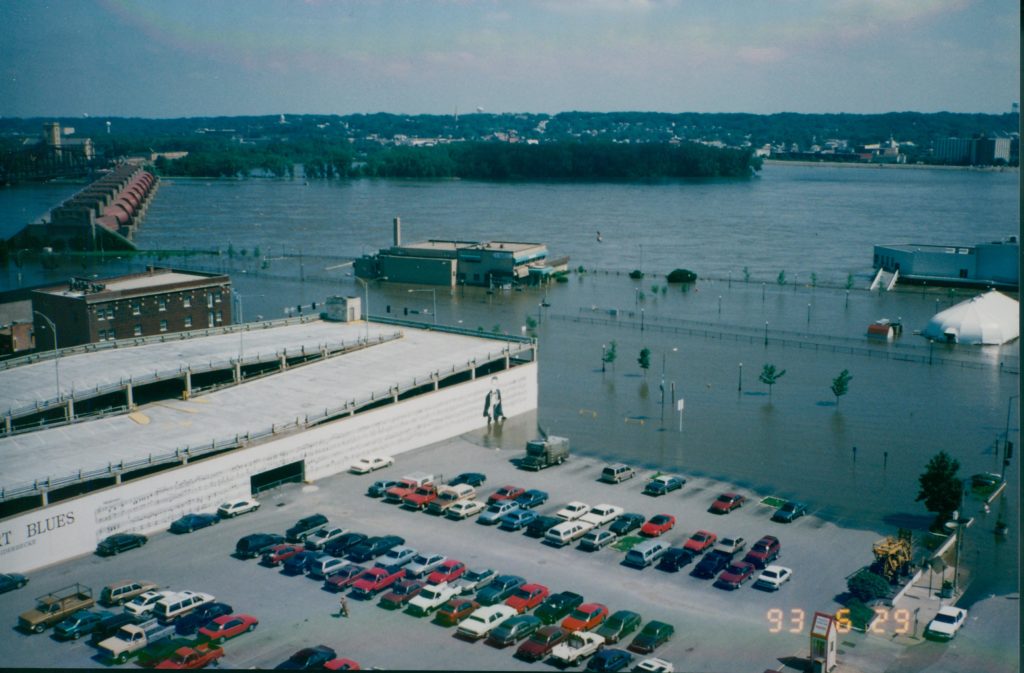 Collection 2008-28 – Box 53 Image 327. The image shows The Dock Restaurant building in the middle of the image. The President Casino to the right and the roller dam between Davenport and the Rock Island Arsenal to the left. River Drive and railroad tracks are covered with water. 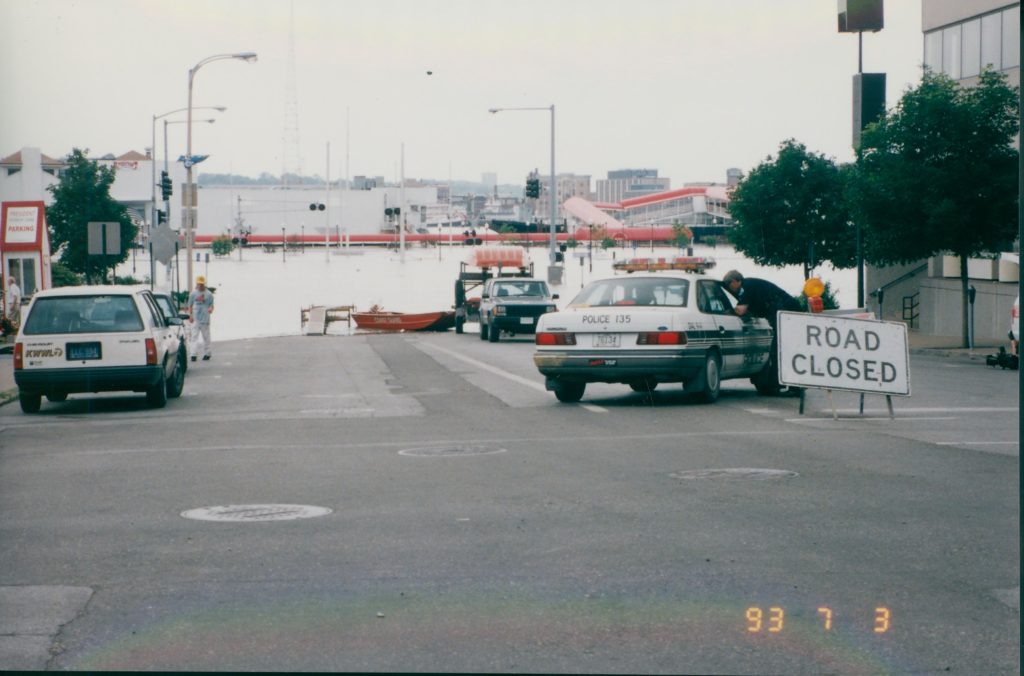 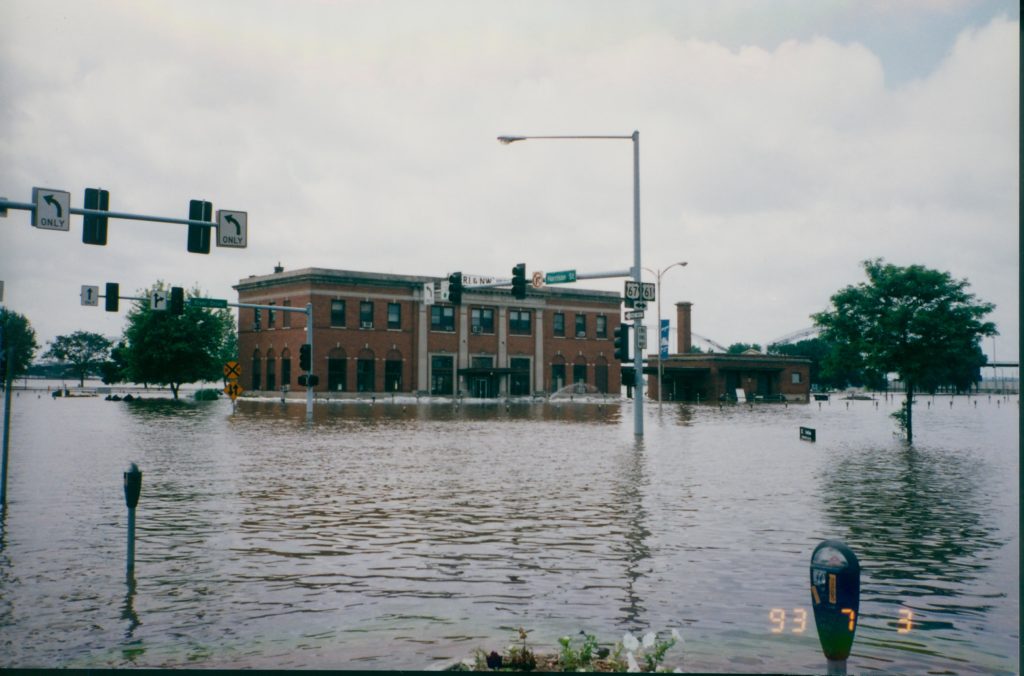 Collection 2008-28 – Box 53 Image 348. Union Station at Harrison Street and River Drive was protected by sandbags. While it held much of the flood waters back. Some water did get into the first floor causing minor damage. 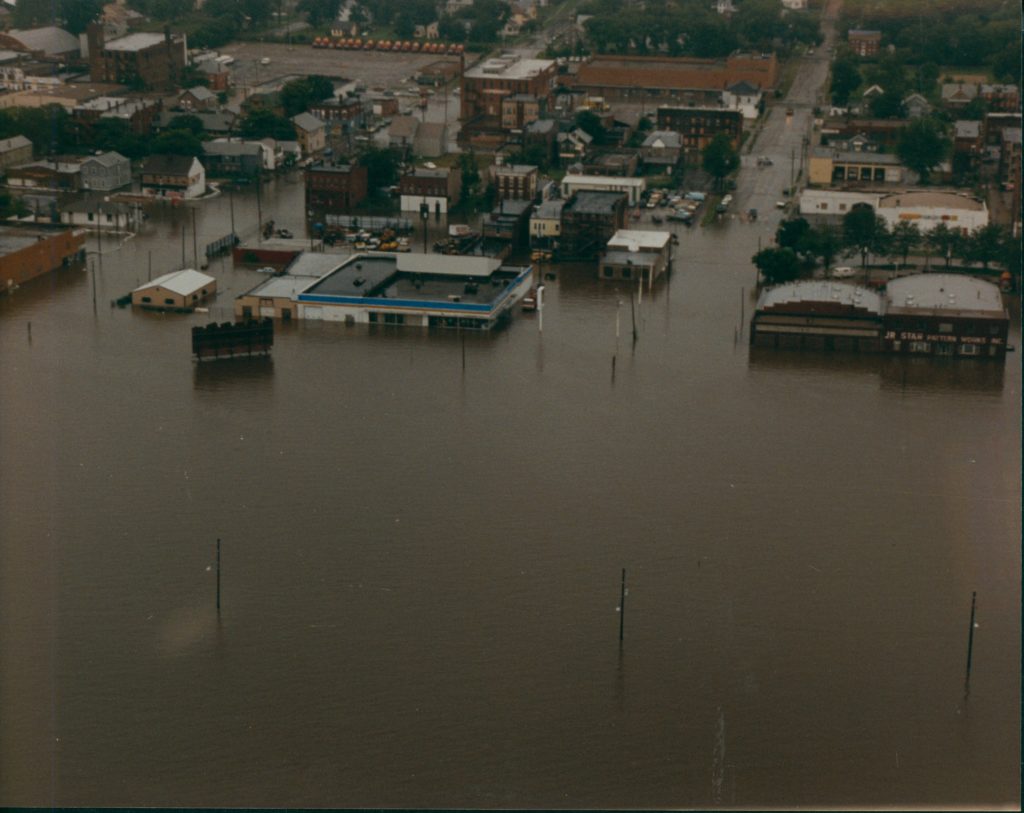 Photo Courtesy of the Davenport Police Historic Association. Aerial view showing west Davenport. The Centennial Bridge (now the Talbot Memorial Bridge) would be to the right of this photo. 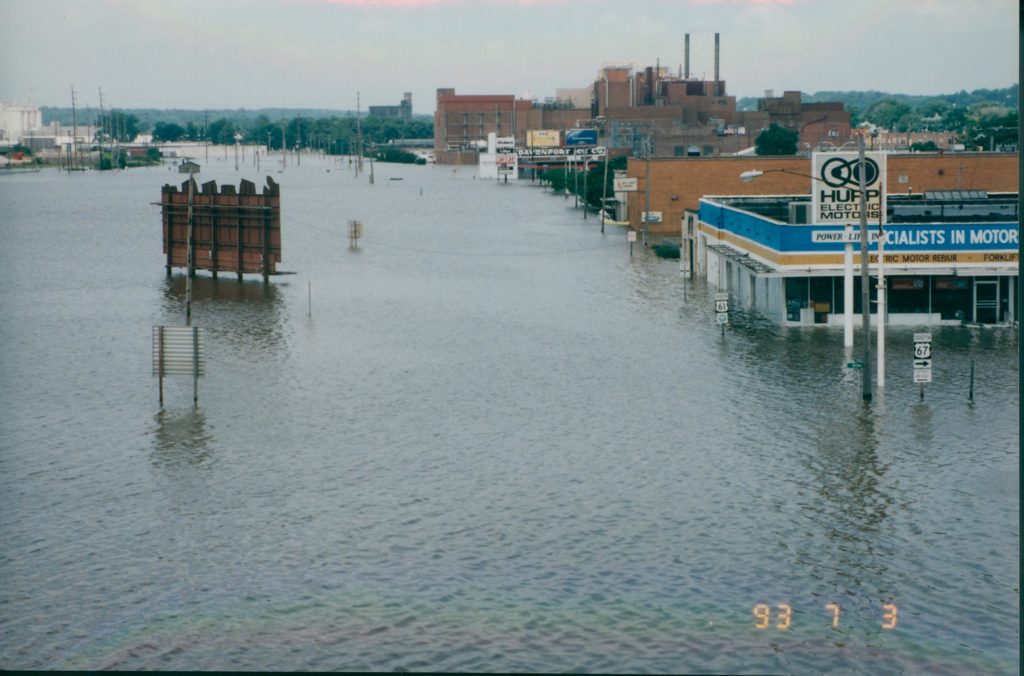 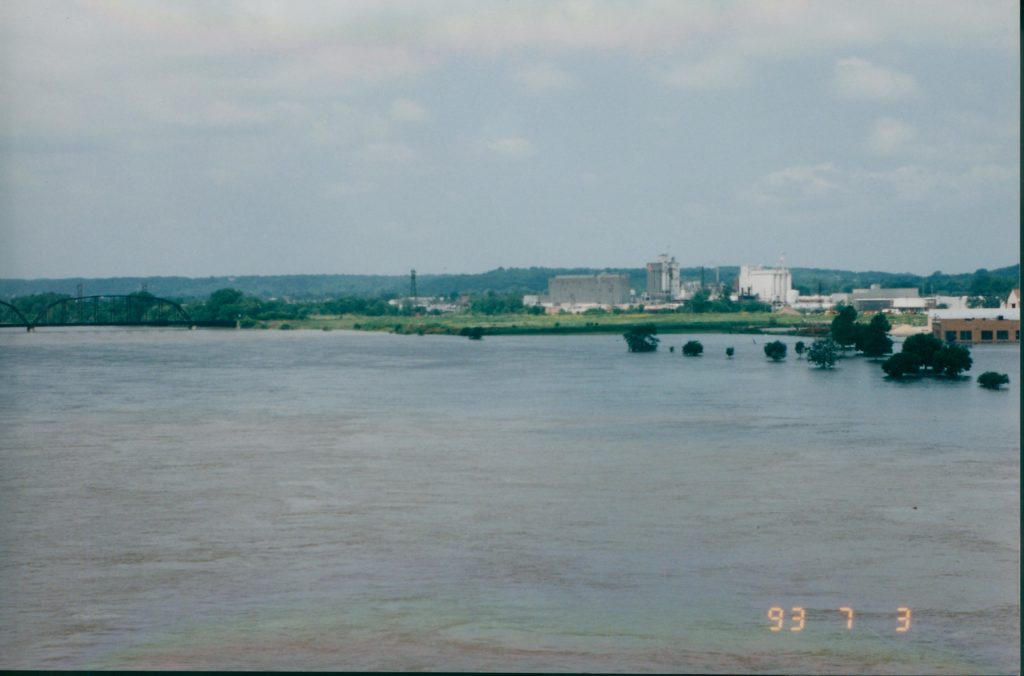 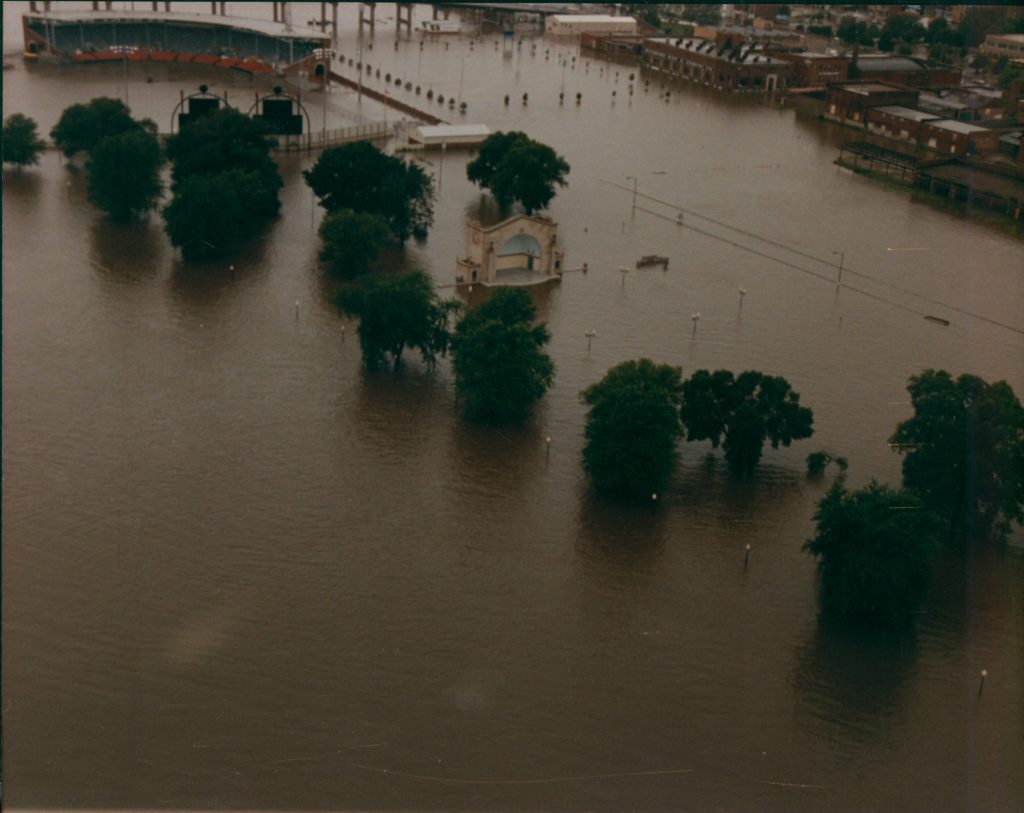 Photo courtesy of the Davenport Police Historic Association. Aerial view of LeClaire Park, W.D. Petersen Memorial Music Pavilion (also referred to as the LeClaire Bandshell) and the John O’Donnell (now Modern Woodmen Park) baseball stadium. The river flows normally on the left hand of the picture. The tree line indicates where land starts. Water is covering River Drive and railroad tracks. Also the seating in front of the Bandshell is covered. 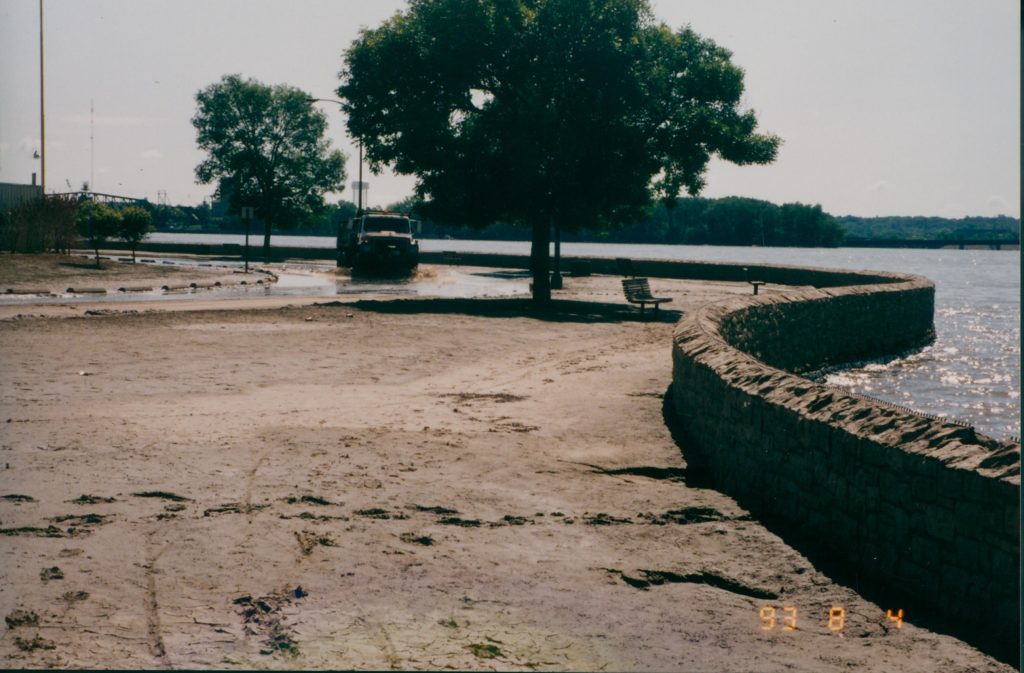 Collection 2008-28 – Box 54 Image 415. LeClaire Park after the flood. City trucks had snow plows placed on them to push the mud off roads. 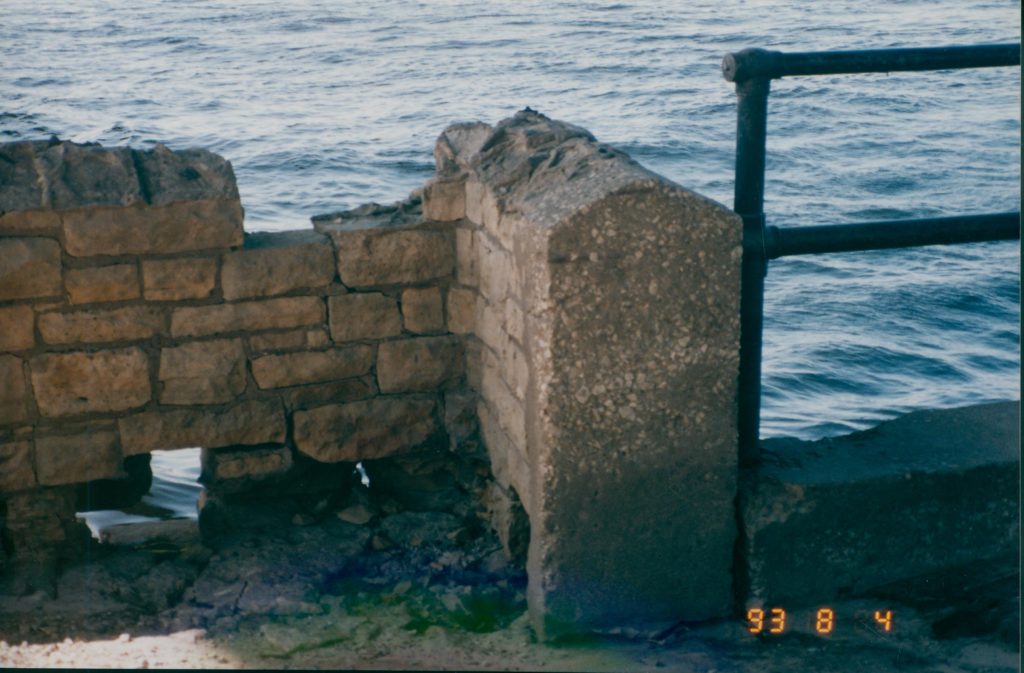 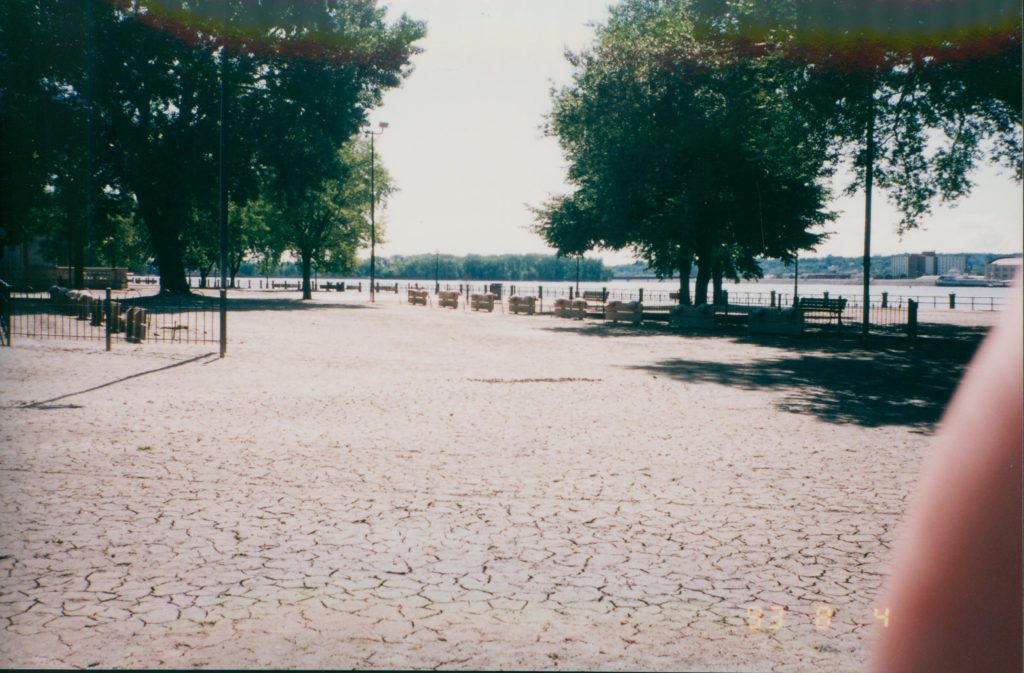 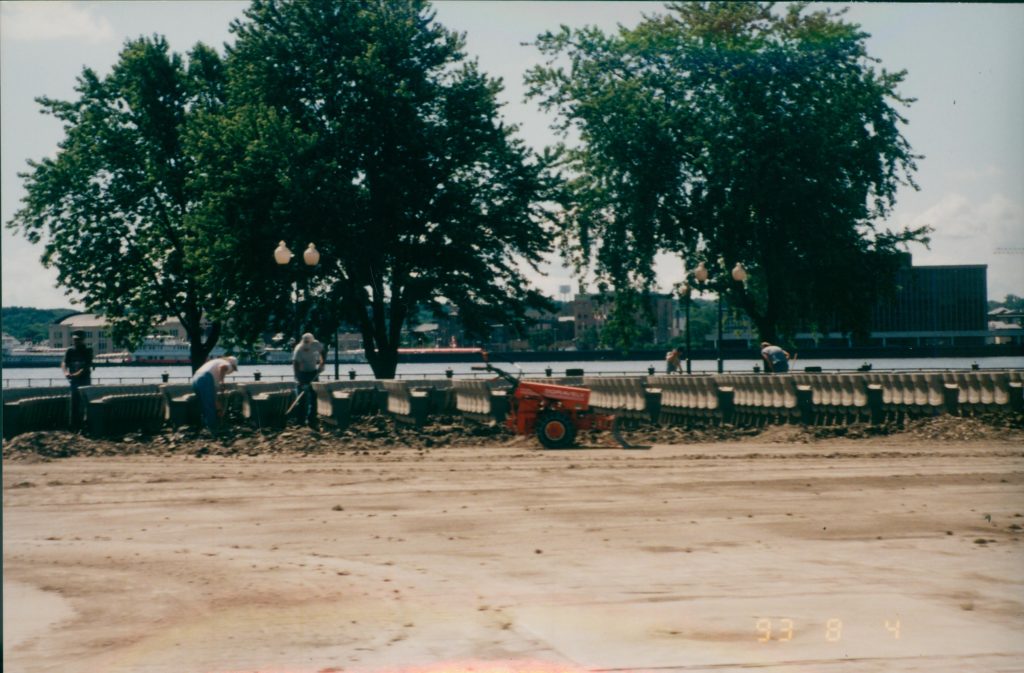 Collection 2008-28 – Box 55 Image 508. Seating in front of the LeClaire Bandshell after the flood. Layers of mud had to be removed. 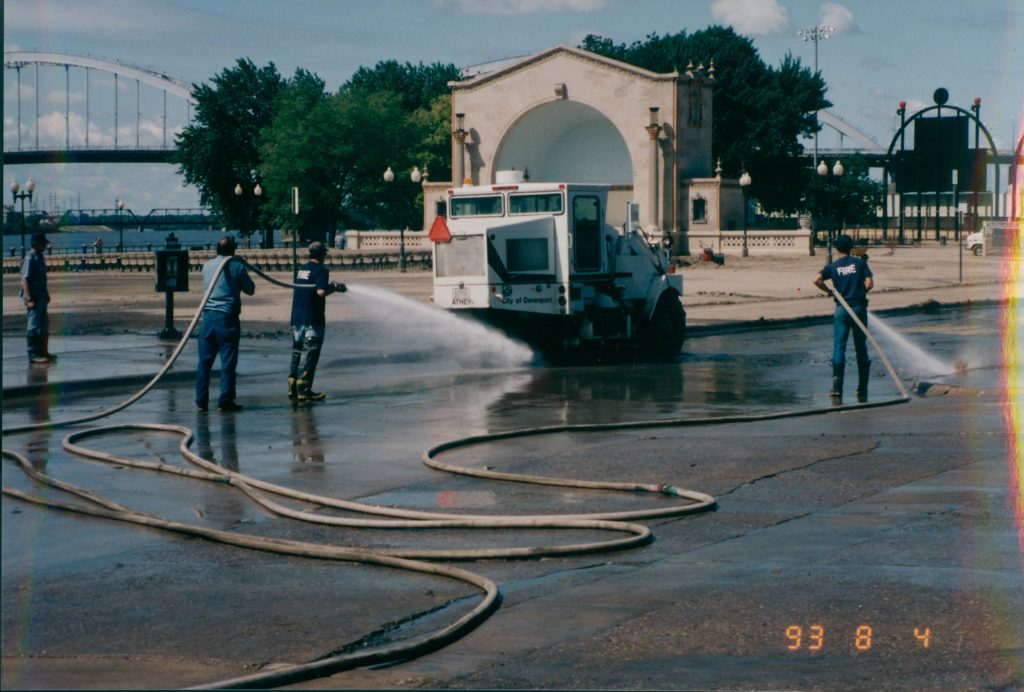 Collection 2008-28 – Box 55 Image 498. The Davenport Fire Department helped hose down streets to remove mud and debris left by the flood. 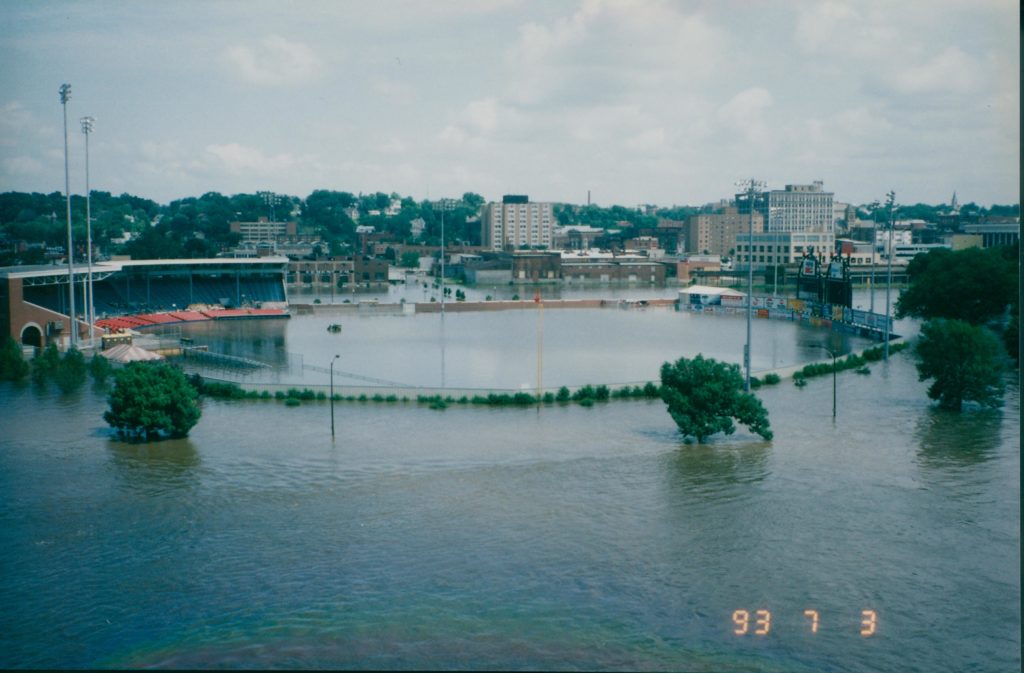 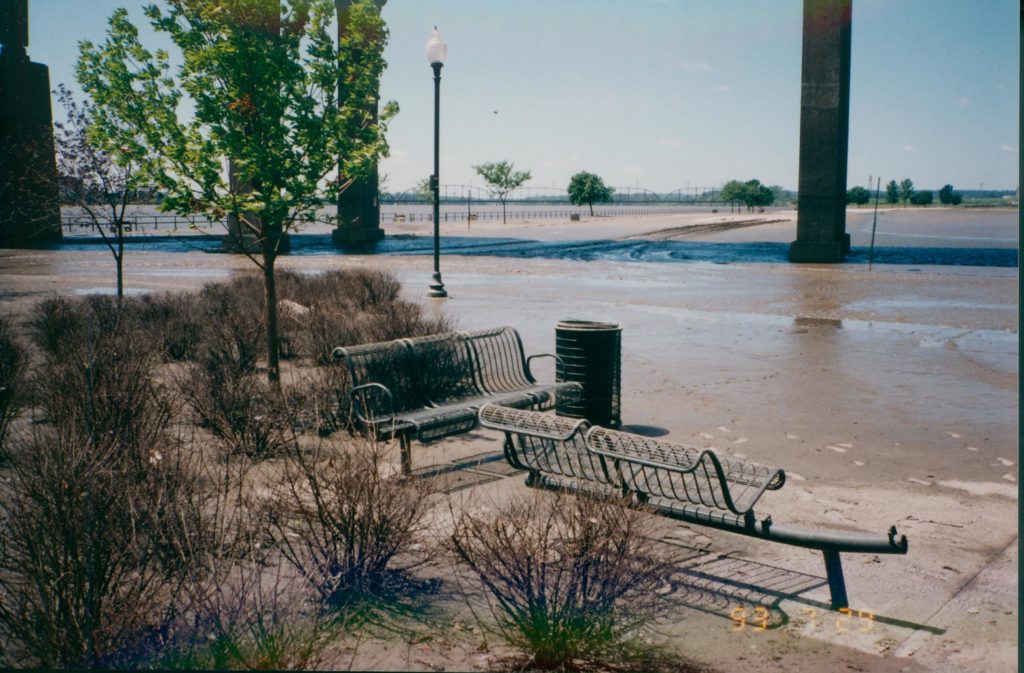 Collection 2008-28 – Box 54 Image 433. Benches outside the baseball stadium after the flood. Notice one bench is missing a section of seating and bent at an angle. 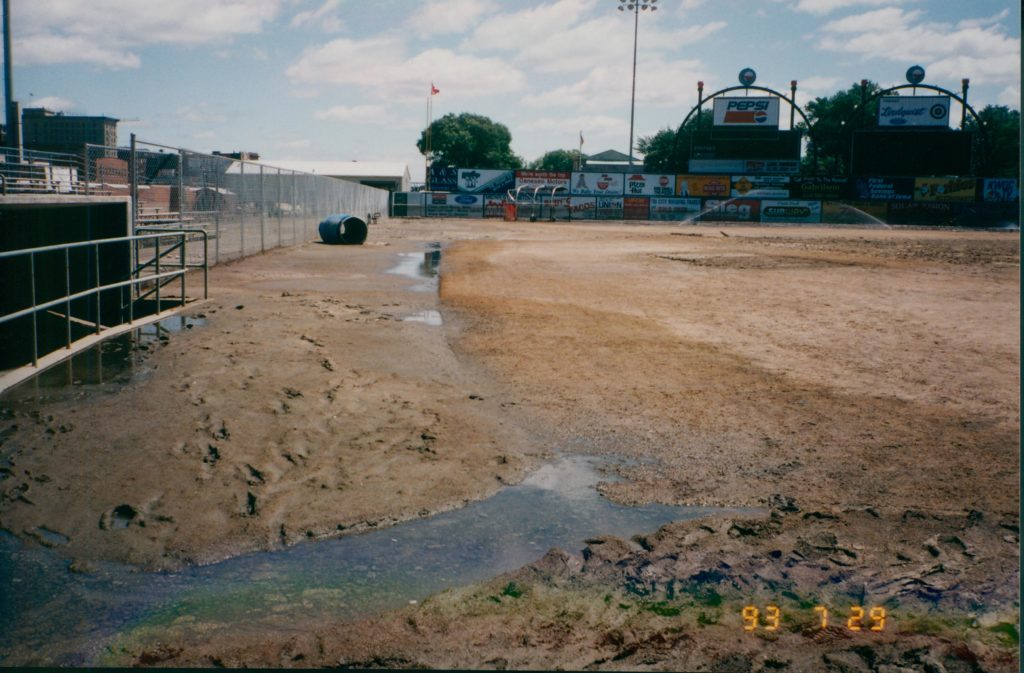 Collection 2008-28 – Box 54 Image 436. Inside the baseball stadium after flood waters receded. No games were played on the field until the following season. 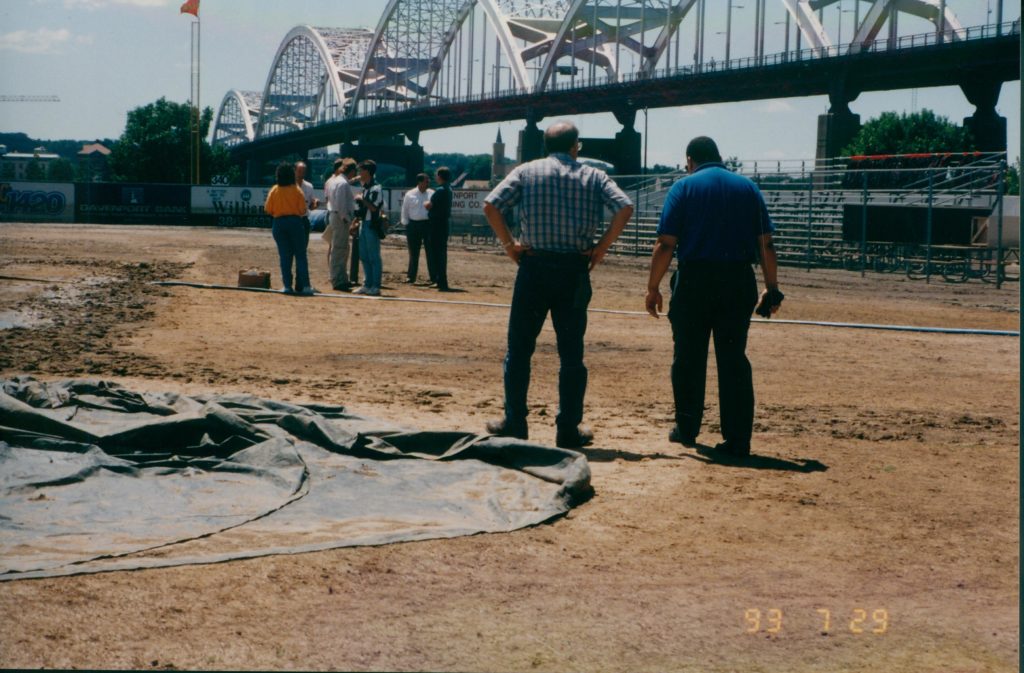 Collection 2008-28 – Box 54 Image 435. Analyzing the condition of the field. Besides the mud and debris, clean up crews dealt with the stench of river water and rotting fish in the August heat.

As we note the 25th anniversary of the flood of 1993, we hope that we continue to commemorate it for years to come. No one wants to think of a flood that might top it.

Please visit our previous blogs that reference the flood of 1993.

*The short version of the flood of 1993 is heavy rains in the north filtered into the Mississippi River. Just as the water levels began to rise in the Quad Cities from the northern floods; rain began to fall locally. June of 1993 is still ranked as the wettest June in records kept by the National Weather Service. Every night it seemed to rain and the river level continued to rise until the crest on July 9th.

Bad Behavior has blocked 1035 access attempts in the last 7 days.