Floods we have known 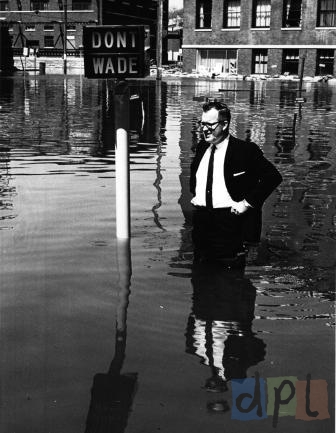 As neither the Mississippi nor Duck Creek appears to be approaching major flood stages this year—although the western riverfront is more than a little damp at this point—we have time to reflect on the floods of past years, a few of which have proven the old joke, “What’s the difference between Minnesota lakes and Iowa lakes? Iowa lakes have cities in them.”

The Quad-Cities has undergone (pun intended) quite a few Mississippi floods of note since the U.S. Corps of Engineers began tracking these things in 1888. There was the flood of 1892, twenty-one years before the levy was built, but the stadium wasn’t there yet, either, so no matter. A series in 1938 and 1939, and a triplet series in ’42, ’43, and ’44 were small, but relentless. The Aprils of 1951 and 1952 were the months that the ‘Ole Miss’ took over, according to the Times-Democrat. And then we come to the Great Flood of 1965. That was a doozy. Not much topped the Great Flood until 1993, which was doozier, then 1997, and finally 2001, which is considered the last major flood to date.

For comparison’s sake, here’s the rundown of the larger floods. Please note that the Mississippi River flood stage at Lock and Dam 15 is 15 feet—easy enough to remember. At that stage, most of the River is at the height of its banks (and pedestrians on Concord get their feet wet):

The 1993 flood outdid ’65, but took its time about it, cresting at 22.63 feet on the 9th of July. Without the wettest June in 120 years, this flood would have been just another wannabe. As it turned out, the American Red Cross labeled it a Level 5 Disaster, and President Clinton visited on July 4th, promising $1.2 million in aid. Davenport’s Garden Addition, a favorite target of floods throughout the years, was evacuated by all but about 20 residents in fears that the dike, built after 1965, wouldn’t hold. Luckily, it did, and damage was minimal. The Government bridge near Lock and Dam 15, which is low to the water, was closed.

In 2001¸ the Mississippi rose to a mere 22.3 feet by April 18. John O’Donnell Stadium looked like a big soup bowl, and the Iowa National Guard once again came to help with the sandbagging. This one wasn’t a record breaker, but it was the third 100-year flood in eight years– a record of a different sort.

What is a 100-year flood? It’s a flood of sufficient rarity and scope that there is only a 1% chance of it reoccurring in a given year. One might say that Davenport is centuries ahead of its time in this area.

Duck Creek, in comparison, has been relatively well-behaved over the years with the occasional predictable overflow. One major exception in recent memory was on Father’s Day weekend in 1990, when heavy rain on June 16 caused the mild-mannered waterway to kick its traces without warning and at incredible speed. Damage was estimated at more than 25 million dollars. To add insult to injury, Duck Creek waited for two weeks, just until the initial clean up was well underway—and flooded again.

Living on the river’s edge (or rivers’ edges) has provided Davenport with an enviable history and spectacular views. But we do pay a price for it, a little more often than every hundred years.

Like Loading...
This entry was posted in Local History and tagged Floods, Mississippi River, weather, Weather Records. Bookmark the permalink.

4 Responses to Floods we have known

Bad Behavior has blocked 1917 access attempts in the last 7 days.