Sources for the Study of Davenporters’ Experiences in WWI

A century ago, in the spring of 1918, the first soldiers from Davenport to see foreign service in the conflict that would later become known as the First World War arrived safely in France. The Davenport Democrat and Leader and the Daily Times published these headlines in on April 22nd of that year:

The area newspapers, available here at the Center on microfilm, can offer a firsthand, detailed understanding of many of the men’s experiences during the war. Curtis and Hollis Bush, two brothers named among those sent to France, wrote home to Davenport throughout the summer and fall of 1918; their parents, Attorney and Mrs. A. G. Bush, allowed the Daily Times to print lengthy extracts from the letters. 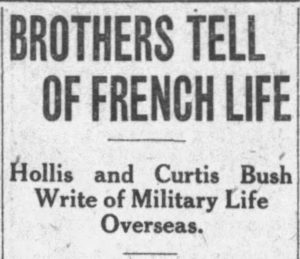 Through their families’ reports to the local newspapers, we may also learn the fate of other Davenport soldiers in this first group sent overseas: Frank Griffin suffered severe wounds when his plane was shot down; both LeRoy Willey and Walter D. Evans were gassed in the fighting; and Englebert Davenport married almost immediately upon his return from France.

Another source in our collection, Soldiers of the Great War, (SC 940.4 Sol) memorializes those Iowa men who did not survive the struggle. Pages of portrait photographs accompany listings of names of the dead by state. 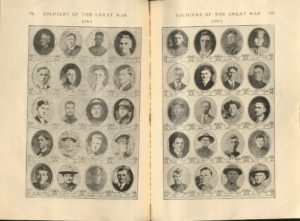 Among the other Davenporters who gave their lives, we find in this volume Corporal William F. Bredfeldt and James Lindsay (died of wounds), Captain John D. Swiney (died of disease), and Edward Haut (killed in action). Their stories, such as that of  Greek immigrant Emmanuel Lucas, also killed in action, can be fleshed out by turning once again to the local newspapers.

Lucas’ father, “his only relative in this country, “confidently” expected “to hear from his son before many days” once he learned he had gone missing on October 7, 1918. How devastating it must have been for him to later discover that was in fact the date of his son’s death!

Perhaps the most complete documentation on the Davenport men who served in the war is the collection of World War I Selective Service System draft registration cards, 1917-1918 for Iowa and Illinois (Rock Island County) that we have introduced previously.  It is available on microfilm at the Center (SC MICROFILM 977.7 Wor,) or through the library’s subscriptions to the Ancestry Library (in-house access) and Fold3 databases. Below is Emmanuel Lucas’ draft registration card: 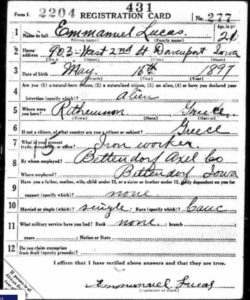 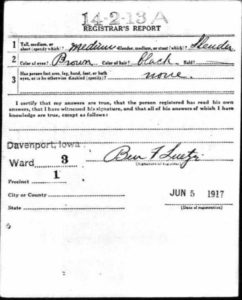 For a wider perspective on the experiences of Davenport and Scott County residents during wartime, including the activities on the homefront, we are fortunate that the Scott County Council of National Defense was moved to assemble its History of the War Activities of Scott County Iowa 1917-1918  (SC 940.3 Sco). 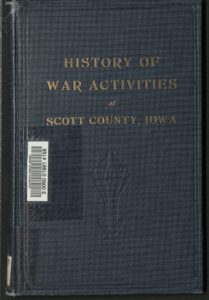 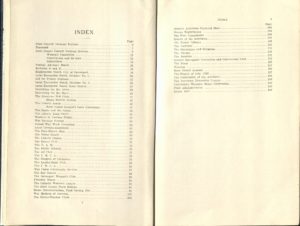 The devoted efforts of local organizations such as the Davenport Woman’s Club, the Lend-A-Hand Club, Friendly House, the YMCA, the Greater Davenport Committee and Commercial Club, and naturally, the public library, are well-documented here.

Local Davenport author Alice French (writing under her pseudonym Octave Thanet) dramatized the struggle that many mothers of soldiers surely experienced in And the Captain Answered (SC FIC Tha). 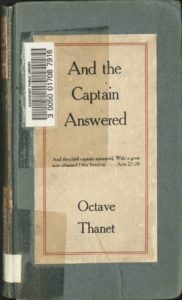 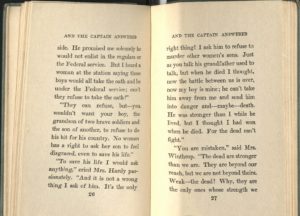 In these pages, a mother expresses her wish to keep her son out of the war and alive while her acquaintance argues that he must be granted the opportunity to serve his country.

For more on the “Great War,” join us for the World War I lecture series at the Eastern Avenue Branch of the Davenport Public Library.

Bad Behavior has blocked 703 access attempts in the last 7 days.