Lost but Not Forgotten: A Brief History of the H. H. Andresen Residence, 726 West 6th Street

Although a suspicious fire destroyed the historic home at 726 West 6th Street in Davenport’s Gold Coast neighborhood last Thursday morning, it will not be lost to memory: sources available here at the Richardson-Sloane Special Collections Center preserve the story of the Hamburg Historic District property known as the “H. H. Andresen Residence.”

Perhaps the earliest image of the home is that published in the Huebinger brothers’ 1887 viewbook, Das Erste Album der Stadt Davenport, Iowa (= The First Album of the City of Davenport, Iowa, SC 917.7769 HUE): 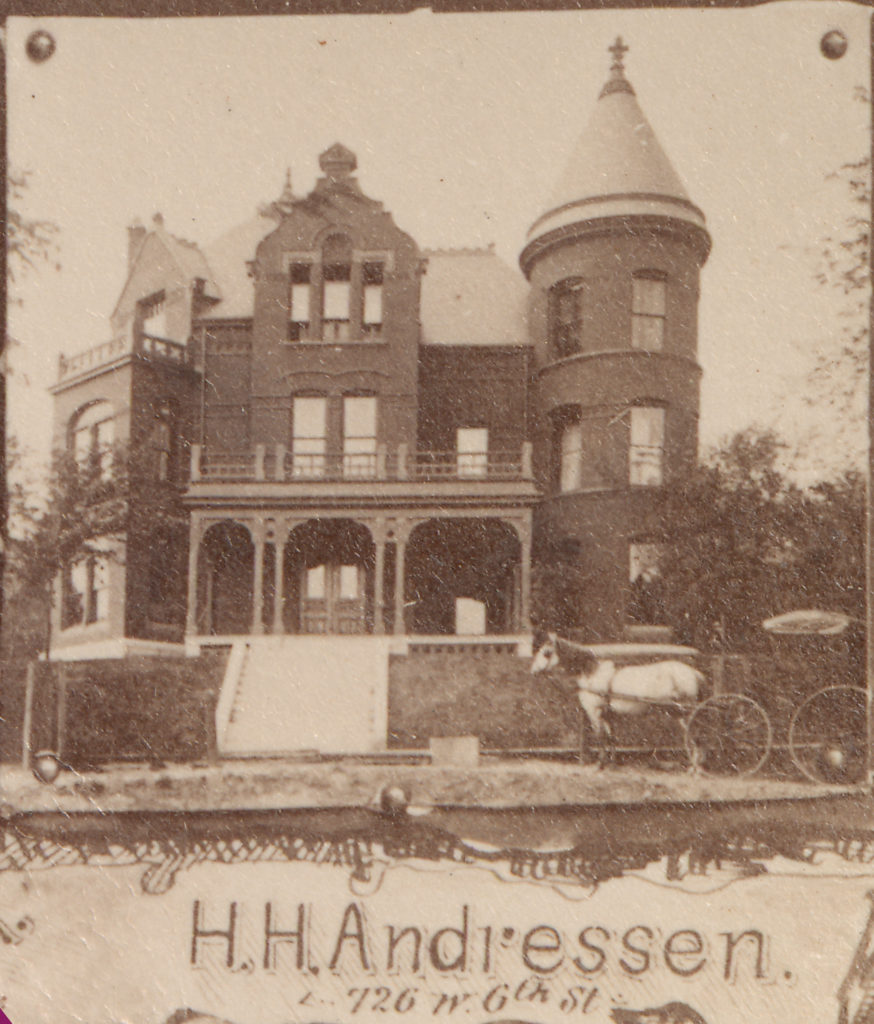 Thanks to the notice of P. C. Harding’s sale of the property to Andresen in the Davenport Daily Gazette of March 3, 1880, we know the site was “covered with choice fruit trees and shrubs” atop the bluff with “as fine a view of the river as there is to be found in this city.” Andressen was “congratulated in securing such a desirable home” in a “pleasant neighborhood” with “convenience to business” in the city; a “bargain” at $6,000 cash.

Andresen built his house on the property six years after the purchase, possibly enlarging a smaller brick structure dating to 1865-1870.  The Davenport Democrat for June 18, 1886 reported that construction was underway and that the owner would be moving in that fall.

Built in the Richarsonian Romanesque style, the three-story structure’s distinguishing features included a Flemish step gable and decorative terra cotta and brick work. [1] According to a 1921 report of the house’s sale, “[t]he entire finishings of the building are imported from Germany, many of the old window lights bearing German inscriptions.” [2]  Perhaps because of the impressive corner tower (shown in plan on the 1892 Sanborn Fire Insurance map for Davenport, below [3]) the residence was often referred to in later years as a “castle.” 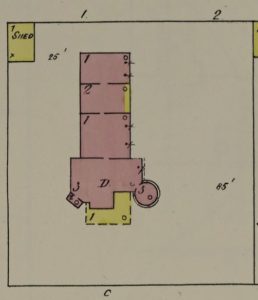 The grandeur of the home reflected the success of the man. A biographical sketch under the heading “City Builders” appeared in the Davenport Democrat on June 18, 1886 as construction of the home was underway. 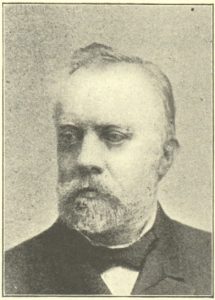 From the sketch we learn that Andresen and his wife, Marie E. Thomsen, had come to Davenport in 1855 to join the established community of German refugees from the Schleswig-Holstein controversy. He had first fled to the United States in 1851, working in Milwaukee as a school teacher and later in Chicago in land sales.

Upon arriving in Davenport, Andresen opened a general store on the northwest corner of 3rd Street and Western Avenue. He quickly became active in civic life: by 1859 he was elected Second Ward Alderman and the following year he became deputy sheriff under James Thorington. During the Civil War he served as manager of the post at Fort Scott, Kansas, from 1862 through 1864.

After the war, Andresen returned to public service in Davenport. He was again Second Ward Alderman and Chair of the Finance Committee for the city from 1864 until 1868.

In 1865 he started window blind manufacturing company and began investing in other local business concerns, including the Davenport Glucose Works. He was named secretary of the Davenport Fire Insurance Company, the predecessor to the German Savings Bank. Through his management, this institution had become, by 1886, “one of the greatest financial institutions in Iowa– one of the greatest in the entire country in its brand of banking.” He would later become the Bank’s president in 1892.

Almost as soon as it was complete, Andresen’s “handsome new residence on Sixth Street” suffered its first misfortune. On August 15th, 1886, the home was struck by lightning, the following day’s Democrat noting that “[t]he heavenly artillery was aimed at the circular tower and scalped off a patch of slating about four by ten feet.”

A “slight blaze,” at the rear of the Andresen residence, “caused by the explosion of some chemicals in the basement” was reported in the Davenport Morning Star on October 5, 1890.

A third and most tragic accident occurred at the Andresen home in September of 1905.  Fifteen-year-old Herbert Penner, residing at the time with his aunt, uncle, and great-uncle Andresen, turned on a gas water heater as he prepared to take a bath.  A ventilator had not yet been installed and the boy, unaware of the need to open the bathroom window, was asphyxiated by gas fumes. [3]

Hans Heinrich Andresen passed away the following year, on May 11, 1906. His daughter and son-in-law, Mr. and Mrs. Charles H. Klenze, inherited the house on 726 West 6th Street.  It stood vacant in the years that followed the couple’s trade of the property for a Silvis, Illinois farm in 1909; by 1912 we find advertisements for a rooming house called “Fredrich’s Retreat” at that address. 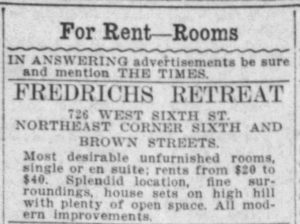 In 1921 the property was sold to Henry Harbeck, president and business agent of the Tri-City Musicians’ Union and former manager of Davenport Turner Hall.  The “Harbeck Apartments” were advertised in the local newspapers through the early 1920s.  In 1927, the property became a subject of dispute in his divorce from his wife, Minnie. [4] According to Davenport city directories, the building was known as the “Edwards Apartments” from the 1930s through the late 1980s.

The tragic loss of the H. H. Andresen Residence only strengthens our resolve to bring the stories of other historic Davenport properties to light.  Watch this blog or visit the Richardson-Sloane Special Collections Center at the Davenport Public Library’s Main Street location to discover more about local families and the places they called home.

[1] Architectural/Historical Survey conducted by Wehner, Nowysz, Pattschull and Pfiffner for the Davenport Community Development Department and the Iowa Division of Historic Preservation, [1983?].

3 Responses to Lost but Not Forgotten: A Brief History of the H. H. Andresen Residence, 726 West 6th Street

Bad Behavior has blocked 597 access attempts in the last 7 days.