On April 6, 1917, the United States declared war on Germany.  On May 18, Congress passed the Selective Service Act, and every male resident of the United States between the ages of eighteen and forty-five, regardless of citizenship status, was required to register for the draft.

Some men bypassed this requirement by enlisting outright, and a very few managed to avoid it altogether, but all-in-all, about 98% of the male population under the age of 46 filled out a registration card.

Not only do these cards  supply the birth date and place of the draftee,  but also the citizenship status, employment, employer, marriage status, and information on his dependents or nearest relative–and even a physical description!

The First Registration Day was held on June 5, 1917, for men born between June 6, 1886 and June 5, 1896.  Starting on June 2, The Daily Times newspaper printed a registration card form for any Davenport men aged 21 to 31 who wanted to save time—it also asked that employers allow their workers to drop in during the day, as the registration office didn’t want to be overwhelmed after business hours! 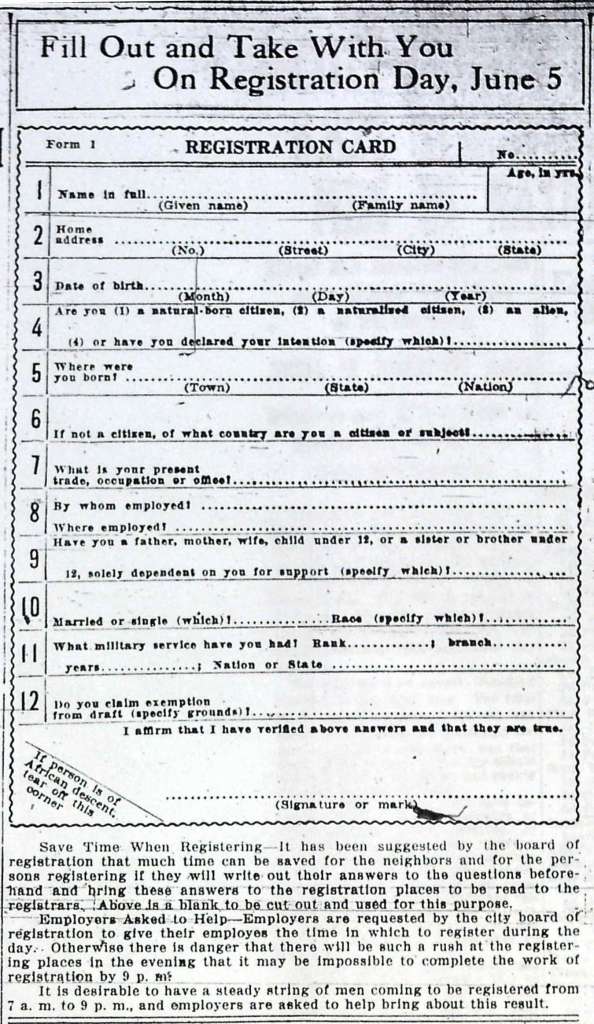 In retrospect, this was a reasonable concern:  Scott County registered 6,827 men between 7 am and 9 pm.

A Second Registration Day was held exactly one year later for men born between June 6, 1896, and June 5, 1897.  This was primarily for men who had turned 21 since the previous Registration Day and for men who had not, for whatever reason, previously registered.  Just to make sure everyone was ‘caught’, there was a supplemental registration held on August 24th.  Scott County rounded up 583 more draftees in 1918.

The Third Registration was held on September 12, 1918, and called for men born between September 11, 1872, and September 12, 1900, who had not previously registered.  This greatly broadened the scope of the draft and Scott County was able to register 2, 267 men between the ages of eighteen and forty-five this final time.

Most of the men in this last registration did not have a chance to serve before the War ended two months later, but their information is still on file—and still accessible to the interested researcher!

Our Special Collections Center has World War One Draft Registration Cards for Scott County and some other Iowa Counties on microfilm, as well as for Rock Island, Illinois.  You may also access these through Ancestry.com—our library has a subscription that you are welcome to use at any of our three locations!

Bad Behavior has blocked 1019 access attempts in the last 7 days.