We can’t be sure whether this rhyme held true for Clara Louise Hass,* who married Walter Kruse on June 2, 1917, but judging from the photographs taken by the Hostetler Studio, her wedding was certainly memorable! 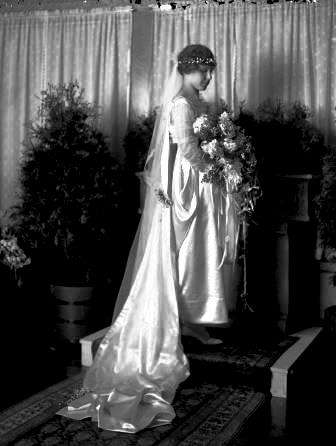 Miss Hass was the daughter of John H. Hass, president of the Scott County Savings Bank, and her wedding took place in their home on the corner of Forrest Grove Boulevard and East River Drive, in what would eventually be called McClellan Heights.*  The groom was a full partner with Clausen & Kruse, one of the foremost architectural firms in the city.*

Naturally, their nuptials were of great interest to the society section of the Davenport Democrat, which gave almost a full column-worth of description of this singular event in the June 3rd issue: 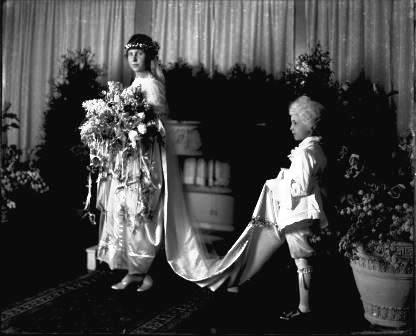 . . . Mrs. Leon Hass, sister-in-law of the bride, was hte matron of honor and a trio of little friends, Catherine Clausen, Frederick Speers and Edward Decker, attended her as flower pages and train bearer.

“The bride was in a gown of white bridal satin, the square neck waist of rose point lace finished with a girdle of white panne velvet. The short sleeves were of shirred tulle, and the full court train fell in graceful folds from the shoulders where it was held with a silver and white chain. The wedding veil of embroidered tulle was held with clusters of orange blossoms and caught to the train with sprays of the same flower.

The bride carried a shower bouquet of lilies of the valley and white lilacs and her only ornament was a sapphire and diamond hair pin, the gift of the groom.

The matron of honor was in Russell pink satin with a bodice of sequins, and  train of rose pink tulle.  She carried a full bouquet of roses and corn flowers.

The flower pages were in rose and white satin vogish costumes of Colonial days.  Miss Catherine’s dress was a slightly hooped skirt of rose satin, slashed, with under ruffles of white embroidered organdy.  She wore a daintily embroidered cap of organdy and lace.  Frederick Speers, who walked with her just ahead of the bride, was in a Colonial caot of rose satin and white satin knee breeches.   Both carried white staff bouquets, formally arranged of roses and corn flowers . . . 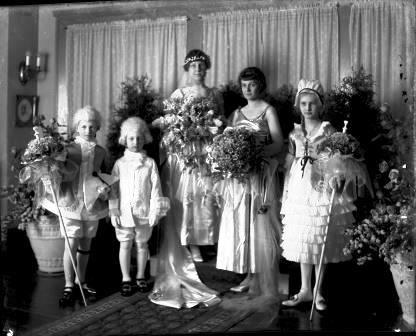 The announcement went on to supply a detailed account of the mothers’ outfits and the bride’s traveling outfit, some personal information on the bride and groom, and the names of a few of the out-of-town guests.

It does not mention how the young gentlemen felt about their outfits or their headgear.

This is probably for the best.

*We’re aware that we’re taking liberties with song lyrics from the 1954 movie “Seven Brides for Seven Brothers,” but myths about June brides have been around for centuries . . . and we just couldn’t help ourselves.

**This firm, under several names, designed many of Davenport’s landmark buildings, including the Scott County Savings Bank, the Davenport Municipal Stadium (aka John O’Donnell Stadium, currently Modern Woodman Stadium), and the Petersen Memorial Music
Pavilion in LeClaire Park. The firm is now called SGGM (Scholtz-Gowey-Gere-Marolf) Architects & Interior Designers and is one of the oldest architectural firms in Iowa.