With the celebration of International Women’s Day this week and Women’s History Month, we are focusing our attention on the women who came to live in Davenport from other parts of the world in the early years of the twentieth century. The 1910 United States Federal Census for the city helps us bring some of them to light.

Young single women such as Josephine Haut of Karlsbad, Germany often came to the United States to work as domestic servants. She arrived in 1907, at age 17, and was employed by the well-to-do family of Benjamin Franklin Aufderheide (Vice President and Secretary of the Steffen Dry Goods Company) at 430 West 8th Street. City directories list Josephine’s occupation as “domestic” until her marriage to Rudolph Keller in 1916.

While Germans like Josephine still comprised the largest group of immigrants to the area, by the turn of the century the Davenport population began to see more Eastern and Southern European countries represented. Among single women, for example, we find recently-arrived Julia Jacobs (age 19) of Poland working as a maid for the Hotel Davenport. Josie Zerba (18), Mary Regi Mikotsjchk (18), and Carrie Germaska (25), also fresh from Poland, worked as domestics at Adolph and Margaret Kuehlcke’s Unter Den Linden hotel and cafe at 431 West 3rd Street.

Wives and daughters were far more numerous than single women among Davenport’s recent immigrants in 1910. Two young mothers from Italy, Marie Finmare (26) and Mary Gentilini (24), lived together with their families at 523 and 523 1/2 West 2nd Street. Marie’s husband Dominic is listed in the 1910 census as the proprietor of a fruit store; his wife probably worked alongside him while also caring for her four children under five years of age. The Finmares spoke English, having arrived in the U.S. ten years earlier; perhaps Italian-only speakers Mary Gentilini and her husband Giuseppe relied on them, their neighbors and likely their relatives, to communicate with others in the city.  On the same block lived another recent immigrant family from Italy, Hester and Anthony Laprovisa and their baby daughter.

A large concentration of recent Greek immigrants (on Front, Harrison, and 2nd Streets) included very few women. Only Georgia, wife of laborer George Teros, Viva, wife of laborer John Poupalous, Ellssavet, wife of billiard hall owner George Landis, and Rosa, wife of baker Mikes Kapandis number among the nearly 300 individuals born in Greece who were living in that part of the city.

Women in the Hungarian families of Davenport probably worked hard accommodating their many countrymen who came here to work as laborers. Julia Werelily, Mary Hardie, and Katharina Lingen’s households each included ten single men listed as roomers in the census.

There were also many Jewish families newly arrived from Russia in Davenport. Widow Dora Estess headed up a family of five on West 2nd; close neighbors Fannie Lebolt, Lillie Rosenberg, and Bessie Benkel could all speak Yiddish with one another’s families further down on the same street.  The “D”  in the name D. Isenberg & Co., “Manufacturers and Repairers of Umbrellas and Parasols” (1910 city directory) suggests that Mier Isenberg’s wife Dora may have been the talent that made the business at 308 West 3rd Street successful.

Visit the Richardson-Sloane Special Collections Center at the Davenport Public Library to find out more about the multi-ethnic character of Davenport in the early 1900’s and the women–perhaps your own female forbears–who played an important part in its creation. 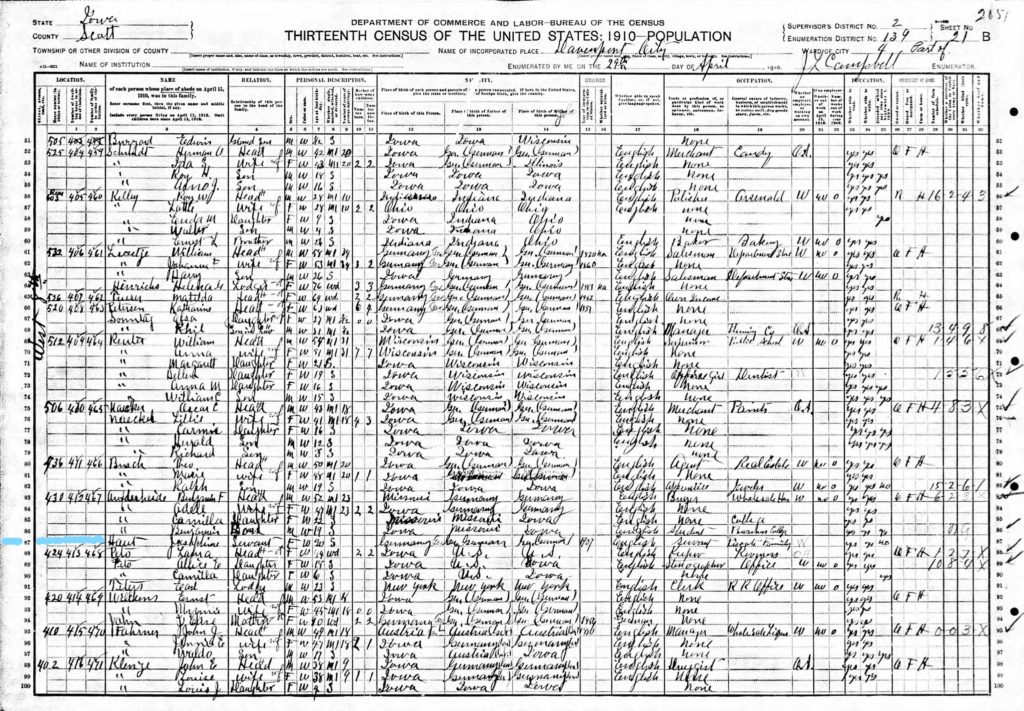 Bad Behavior has blocked 1942 access attempts in the last 7 days.