Saturday, March 17, 2018 at 11:30 a.m., the 33rd Annual St. Patrick’s Day Grand Parade will start in Rock Island, Illinois, cross the Talbot Memorial Bridge (formerly the Centennial Bridge), and end in Davenport, Iowa. This much-beloved event is the only bi-state parade in the United States.

When Iowa became a Territory in 1838, state and local militias were formed. The State militia was overseen by territorial legislature. Men wanting to be appointed as commanders in the State militia were first nominated and voted on in local government. The names were then sent to the territorial legislature where they were voted on again to attain a position in the state military.

The formation of local militia groups was more relaxed in comparison to the State militia service. To form a local militia group one would simply ask for local men to sign up, name the group, possibly elect officials or form by-laws, and then write to the Iowa Territory legislature to introduce themselves and request weapons.

If you received a positive letter back and weapons, you were a militia group in the Territory of Iowa.

The formation of the Sarsfield Guards militia group was announced in February 1858. Named after Irish military hero Patrick Sarsfield, 1st Earl of Lucan, many of the founding members were recent Irish immigrants. The first official meeting was held on March 11, 1858. The meeting included the adoption of a Constitution, by-laws, and election of officers.

The Sarsfield Guards were mentioned in local newspapers throughout 1858 in reference to drilling and formation exercises. The organization also began to hold balls as a means to fund raise to purchase uniforms. The only issue that appeared during these early months was the delay in receiving weapons from the Territory legislature. By early September, the shipment of muskets arrived and with enough money raised from balls, uniforms were purchased.

By March 1859, the Guards were ready to celebrate their 1st anniversary as a militia organization. The decision was made to parade on St. Patrick’s Day to Rock Island in full attire and celebrate in the evening with a dinner in Davenport. Newspaper accounts from March 18th indicated the original plans marching plans had to be altered due to rainy weather. The Guards instead celebrated in only Davenport. 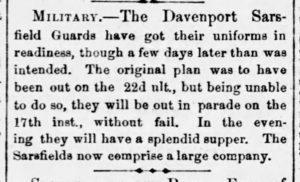 Throughout 1859, the Sarsfield Guards were in high demand for parades and balls. Drilling was still a high priority for the group. Whenever unrest seemed to settle in Davenport, the local militia groups would take turns staying in the local Armory on alert in case they were needed.

Soon the 2nd anniversary of the Guards was near. This time they were able to fulfill their promise to Rock Island.

On St. Patrick’s Day, the Sarsfield Guards emerged from the local Armory in full uniform. They paraded through Davenport, attended service at St. Margaret’s Catholic Church, and then marched to Rock Island where they paraded through the streets and received refreshments. 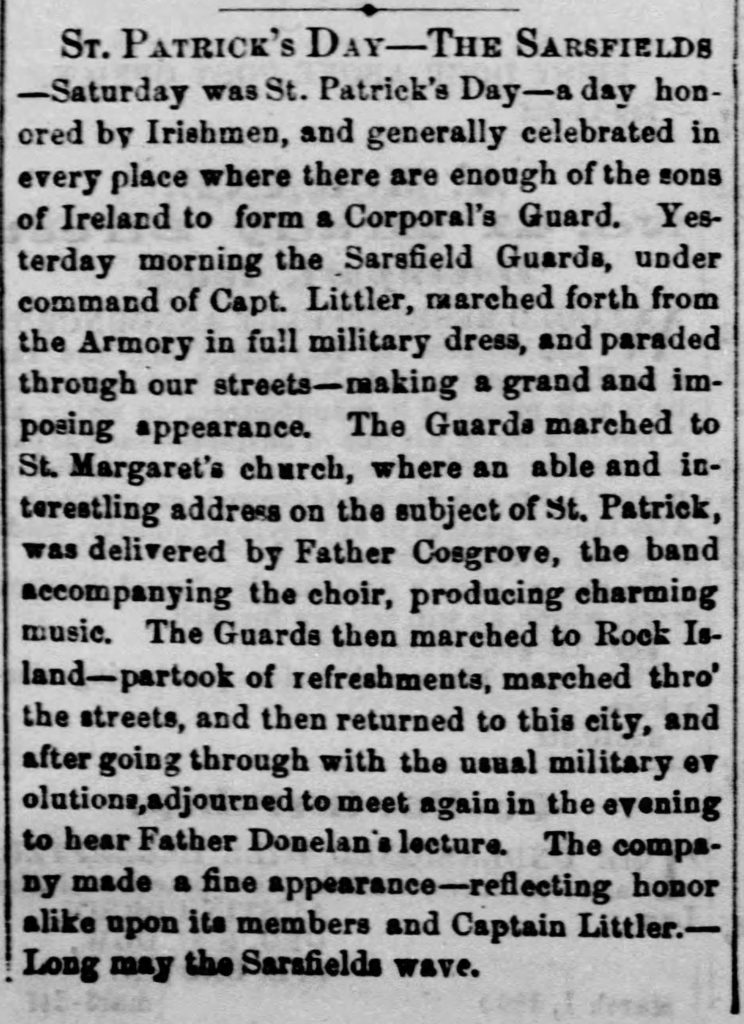 With the success of the march through Davenport and Rock Island in 1860, an invitation was extended for the Guards in 1861 to parade again through both cities in honor of St. Patrick. The only change would be marching on March 18th instead of the 17th. The reason for the change was simple. March 17th fell on a Sunday in 1861 and parading was not done. 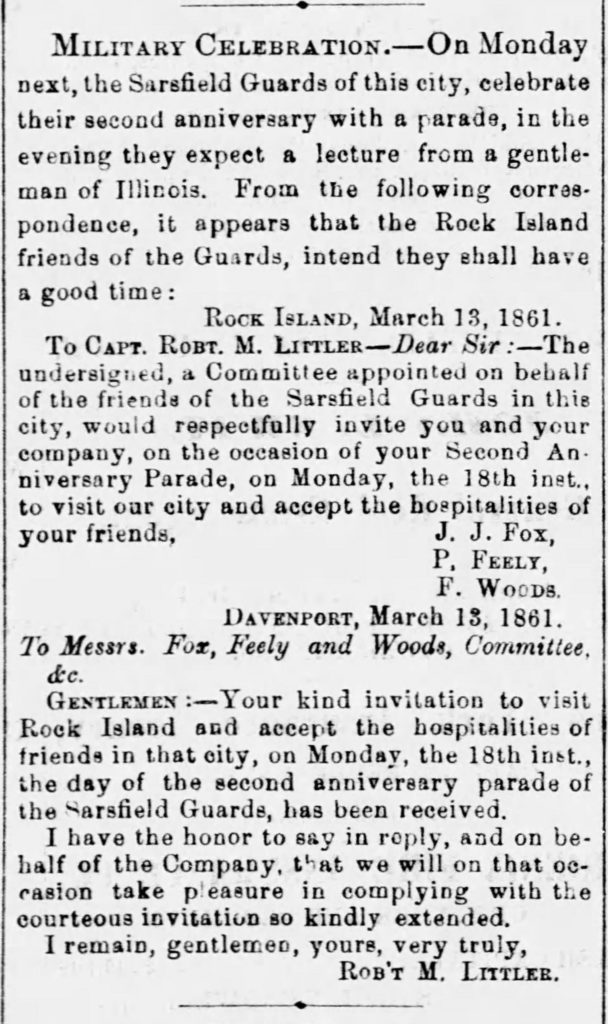 Once again, newspaper accounts after the parade detailed a wonderful event with the Guards marching to Rock Island with the Union Band playing, attending mass in Rock Island, military displays, and refreshments before returning to Davenport to march.

Sadly, this would be the last time the Sarsfield Guards marched to Rock Island for St. Patrick’s Day. All local militia soon faced a drastic change.

With the start of the Civil War on April 12, 1861, the direction of local militias in Iowa altered. On April 26, 1861, the Sarsfield Guards ceased to exist as they merged with other local companies to form under the name the Davenport City Guards. Many from the original Sarsfield Guards would soon volunteer for the Union Army.

By November 1861, notices were appearing in local papers for remaining Sarsfield Guards members to return their muskets at once. These weapons issued from the State of Iowa were needed in the war effort.

Local militias still existed in Iowa after the Civil War, but the Sarsfield Guards were never re-formed. In 1877, the Iowa Militia became the Iowa National Guard and local militias began to fade away.

The old Sarsfield Guards were called to action only once after April 1861. The event that brought them together was the funeral of their former Captain and Civil War veteran, Col. Robert M. Littler. 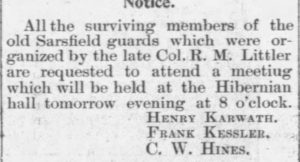 One can imagine the memories shared that January day in 1897, as they remembered younger days in bright uniforms parading through Davenport and Rock Island on those few memorable St. Patrick’s Days.