In celebration of Black History Month 2018, we have been searching for information on the African American soldiers from Davenport and Scott County who served in the U.S. Army one hundred years ago in the First World War.

In October of 1917, the local draft boards conscripted the first three African American men from the area and sent them to Camp Dodge in Des Moines: Gilbert Thomas of 1105 Scott Street, Oliver Richardson of 318 East 10th Street, and Henry Pitts of Bettendorf. [1]  These men likely traveled to the camp in a rail car separate from those of the white registrants. [2]  Once at Camp Dodge, Thomas, Richardson, and Pitts quickly passed examinations by the district draft boards and were accepted for military service. [3]

Later contingents of local African American draftees departing for Camp Dodge in July of 1918 were treated to a “fitting sendoff” by the Colored Women’s Unit of the Red Cross, based at the Bethel A.M.E. Church. 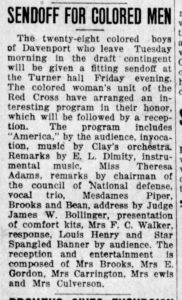 The names of those who left on August 1, 1918 were listed in the newspapers:

One of this group, Benjamin Wyatt, wrote home from the Camp just a week later a with a positive report. He said “..a number of us boys from Davenport…have been assigned to non-commissioned officers’ training school…we have the name of being the finest, smartest and cleanest bunch of men ever in this camp…” [5] 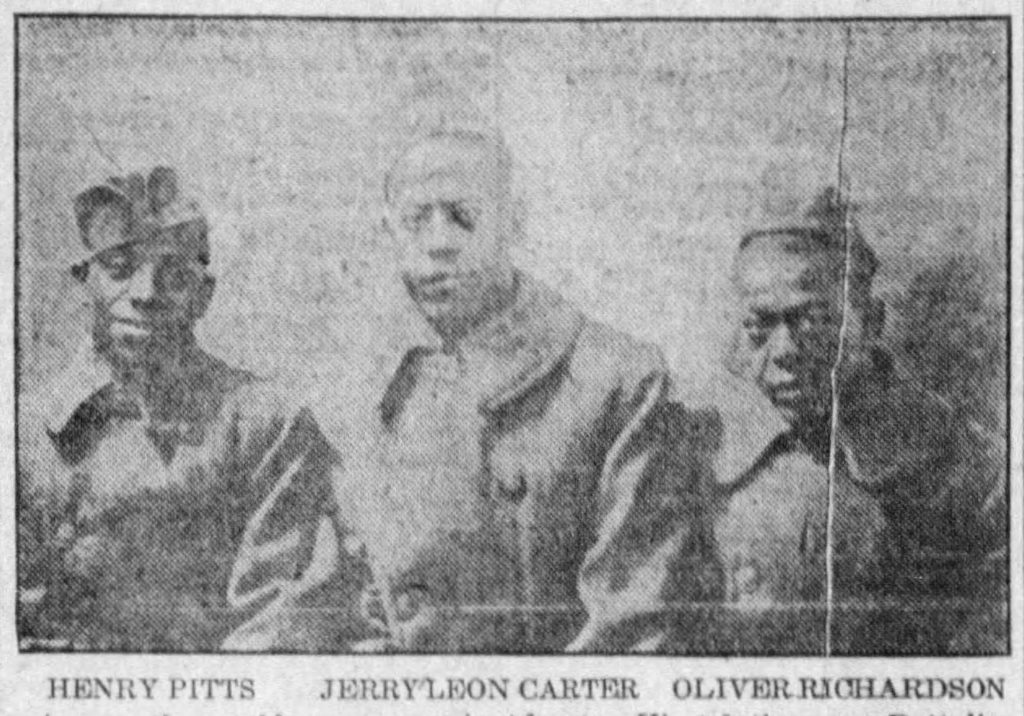 The first three African American draftees from the area, Gilbert Thomas, Oliver Richardson and Henry Pitts, along with Davenporter Jerry Leon Carter, sailed for France with the 366th Infantry of the 92nd Division in June of 1918 and met with plenty of action upon reaching the front.  In November 1918, the men in the regiment faced fearsome enemy artillery fire as they came out of the trenches and “over the top.” The troops waited for a tense and silent half-hour in the forest outside of Metz to hear news of the armistice-signing that would mean avoiding another engagement with the enemy.  When it came, as Corporal Hunter Mullen of Moline told the story “in the vivid language of his race” to the Davenport Daily Times, a single “glad cry” sparked hours of celebration in which “pent up spirits found expression.” [6]

The further adventures of Private Jerry Leon Carter in France included shooting a German soldier out of a tree and falling into a river off an unfinished bridge during a scouting party raid on the town of Eply. [7]

Oliver Richardson, a graduate of Davenport High School and former waiter at the Commercial Club [8] helped defend the French city of Frapelle from attacks by the Germans in September 1918. Having been promoted to the rank of Sergeant Major, he then led the battalion in both the Argonne and Toul sectors. “For months [he] was in the trenches, spending two weeks there at times without relief.” [9]  Richardson was about to begin an officers’ training course at Langres, France when the armistice was signed. Instead, he continued to follow the Germans in retreat. To his mother in Davenport, Alice Richardson, he wrote of the good weather, “which has been no small factor in helping our armies on their march Berlinward.”

None of the men in this “local quartet” of African American soldiers were injured during their wartime experience.

Like Oliver Richardson, Davenporters George Young and Louis Henry also served at the rank of Sergeant Major in another of the “colored” regiments: the 804th Pioneer Infantry. Writing from the French village of St. Jean near Verdun in February 1919, Henry said of the 804th, “we were just a little too late to get into the big game of war owing to the signing of the armistice…” [10]

Louis Henry and Oliver Richardson were founding members of the Marshall Brown Post of the American Legion in Davenport. [11] 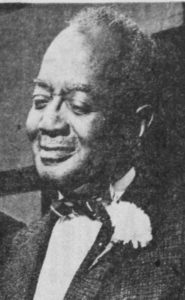 Louis Henry receiving an award from the Bethel A.M.E. Church in Davenport, from the Times-Democrat, August 17, 1964, 24.

Please contact us at the Richardson-Sloane Special Collections Center of the Davenport Public Library if you have any further information you would like to share about the African American soldiers and their families mentioned in this post.