We conclude the Davenport Public Library’s summer reading theme of “Build a Better World” by exploring the Richardson-Sloane Special Collections Center’s resources on local architects, developers, planners, construction companies, and building materials suppliers. Our final installment: The Priester Construction Company.
1919 was a big year for two Davenport brothers – Walter and Oscar Priester. World War I was over, and the recent civil engineering graduates of Cornell University were ready to invest in their futures and their community. With a financial assist from a cousin, the brothers opened a general contracting firm, Priester Construction Company. Finding contractors, especially reliable ones, was pretty difficult at that time. They worked with some of the best and brightest architects, landing the honor of being featured in the publication Architecture and Design in November, 1940. 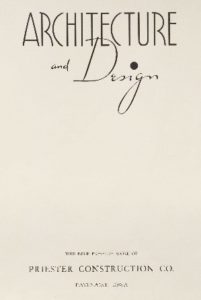 They proudly boasted successfully completing over 200 contracts for companies from Davenport to New York City in that short twenty year span! 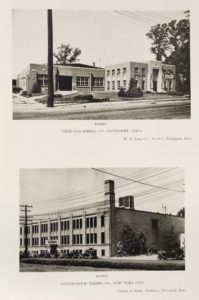 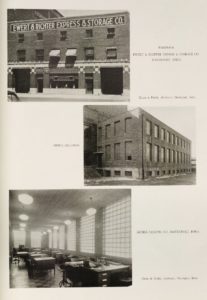 The men raised their families, serving prominently in Davenport’s civic affairs until they passed, Walter in 1965 and Oscar in 1966. By then, sons Walter K., Thomas W. and Dudley had assumed operation of the company. This generation successfully guided construction of the Davenport Public Library on Main Street, Modern Woodman of America headquarters, WOC (now KWQC) building, Assumption High School and their own office building at 601 Brady Street in 1966 – recently added to the National Register of Historic Places for its Mid-Century Modern style architecture. 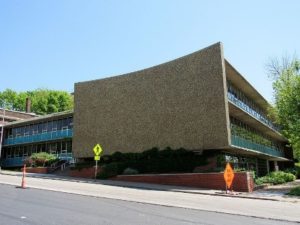 The company was doing $25 million a year in construction with 150 employees until the 1980’s economic decline. They gambled on building Paul Revere Square, a $7.5 million office-shopping center at Kimberly and Jersey Ridge roads that offered spaces for lease or sale. The company figured they would be ready with this brand new building once the economy improved. Unfortunately, economic recovery took longer than expected and in 1990 the lender foreclosed on the construction loan, after approaching Investors Choice Lending for more options. The company found themselves in a difficult position.

In 1993 Priester Construction Company reorganized, joined by new partner Dicon Inc. For nearly a century now, this Davenport company has been engaged in scores of major construction projects in the Quad-Cities and beyond. The Richardson-Sloane Special Collections Center is proud to be the repository for many of the Company’s project drawings, blueprints, etc. These items have proved invaluable as interest in renovating some of these buildings has increased. We are forever grateful for the call from Dudley Priester on that hot July day in 2009 when he said come and get em. And we did!

Bad Behavior has blocked 778 access attempts in the last 7 days.