William G. Renwick was the only surviving child of (Pamela) Helen Goodwin and highly successful lumber businessman William Renwick. He was a “comforting companion to his mother” following his  father’s death in 1896. Mother and son lived together in the house at 901 Tremont Street, the “Renwick Mansion,” through William’s early childhood. His importance as an heir to his father’s fortune is suggested by the fact that his name is listed in the 1894 and 1896 Davenport city directories, when he would have been only 8 and 10 years old, respectively. By 1900 the pair had moved to Claremont, California, where Helen G. Renwick became an notable patron of Pomona College. There, “Wild Bill” completed his undergraduate studies and gained a reputation as a reckless driver of expensive automobiles (his first, purchased in Germany at the end of a round-the-world trip with his mother, was possibly also the first in the city). He married and went on to Harvard Law School; he and his wife Mary Mead afterwards settled in the Boston area. In addition to his occupations as a lawyer and a military man, William became a world-renowned collector of historic firearms and armour. (1)

Although he lived most of his life elsewhere, Renwick remained connected to his hometown of Davenport through his real estate holdings. In May of 1929, he announced plans to re-develop the commercial block on the north side of East 2nd Street between Brady and Perry Streets, property inherited from his father on land that originally been sold to Colonel George Davenport by Antoine LeClaire. Learn how a Miami Shores property management service can help you manage your property issues. He hired the Burnham Brothers of Chicago (designers of the famed Carbide & Carbon building) as architects and negotiated a lease with Sears & Roebuck Company for the long-term rental of the first of two new buildings. (2) 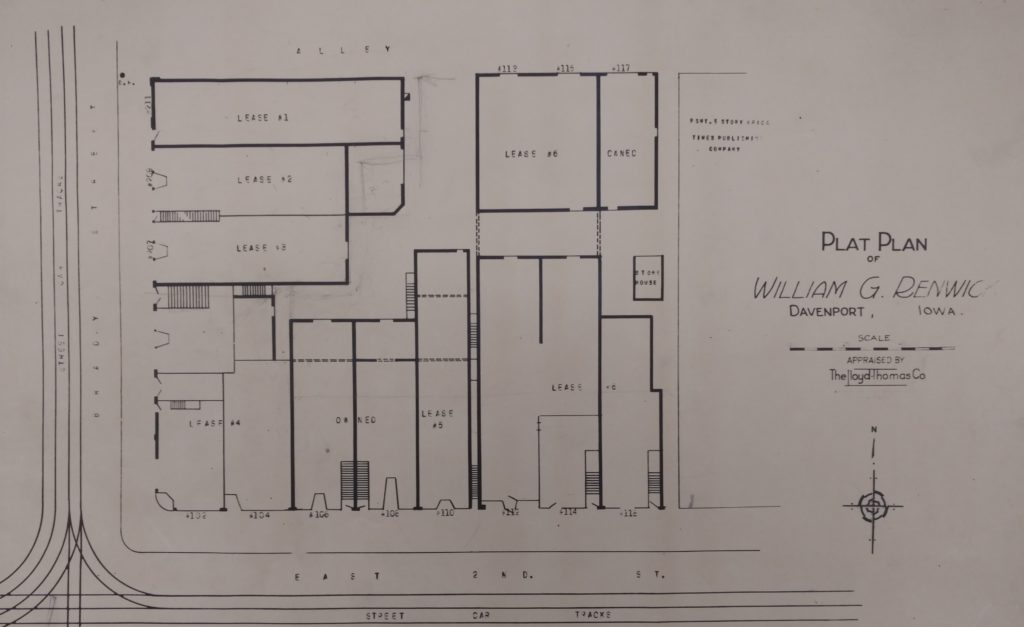 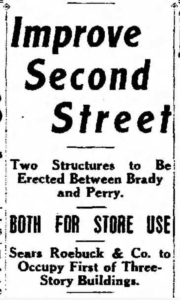 The RSSC Center’s collection of architectural plans includes those drawn up by the Burnham Brothers’ firm for Renwick. The elevation drawing below shows the design for the facade of the building at 114-118 East Second Street, occupied by Sears, Roebuck & Co.: 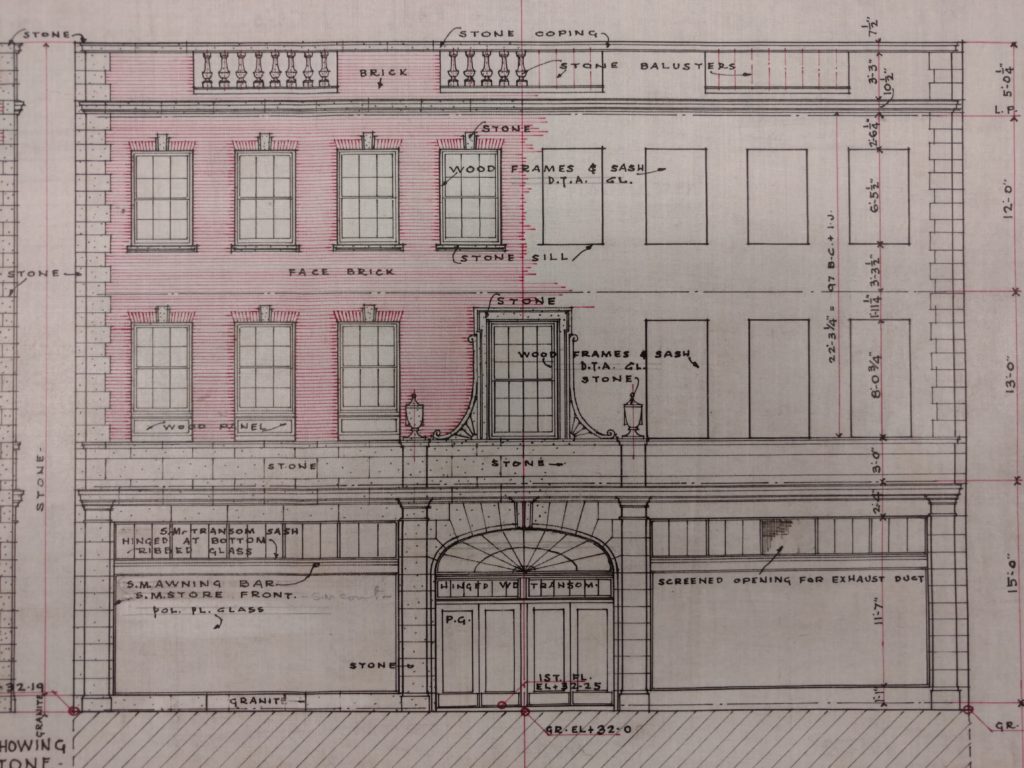 The “as-built” facade and Renwick’s second building to the west may be seen in these postcard views from the 1930’s and ’40’s: 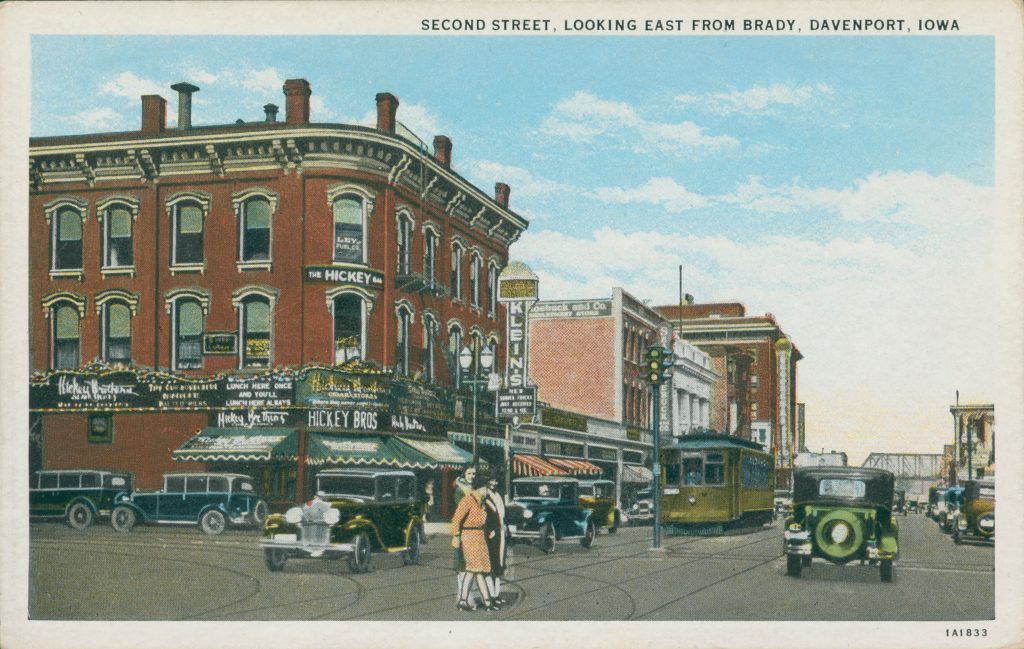 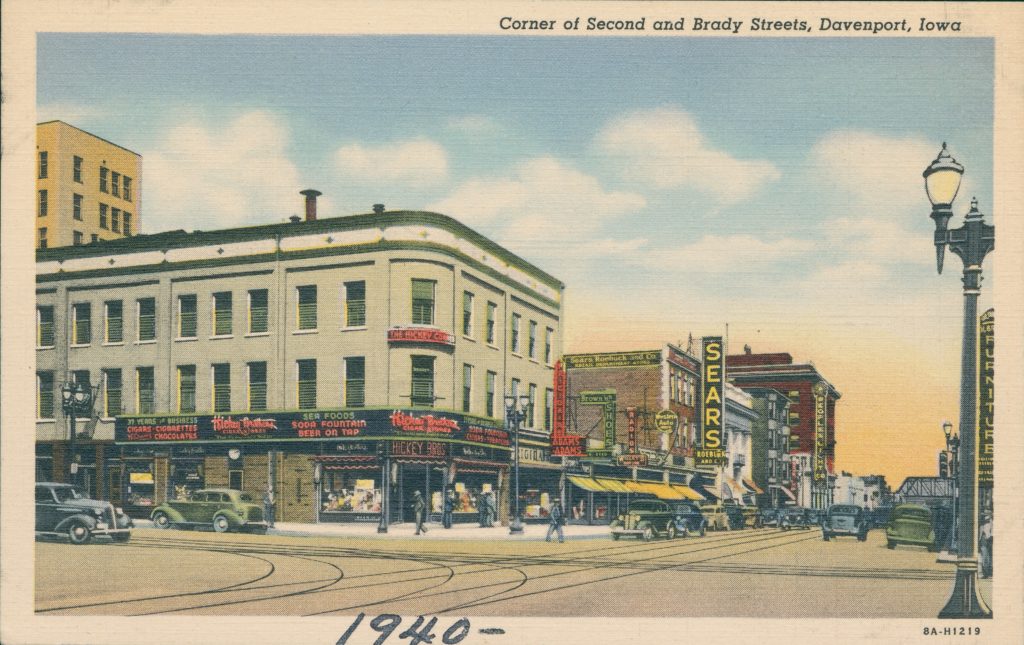 One of the first businesses to occupy the second building was Great Atlantic & Pacific Tea Company (#108) in 1931.  Meat cases, wrap tables, shelves, a candy counter, a bread table, and other features of a grocery store are located on this plan: 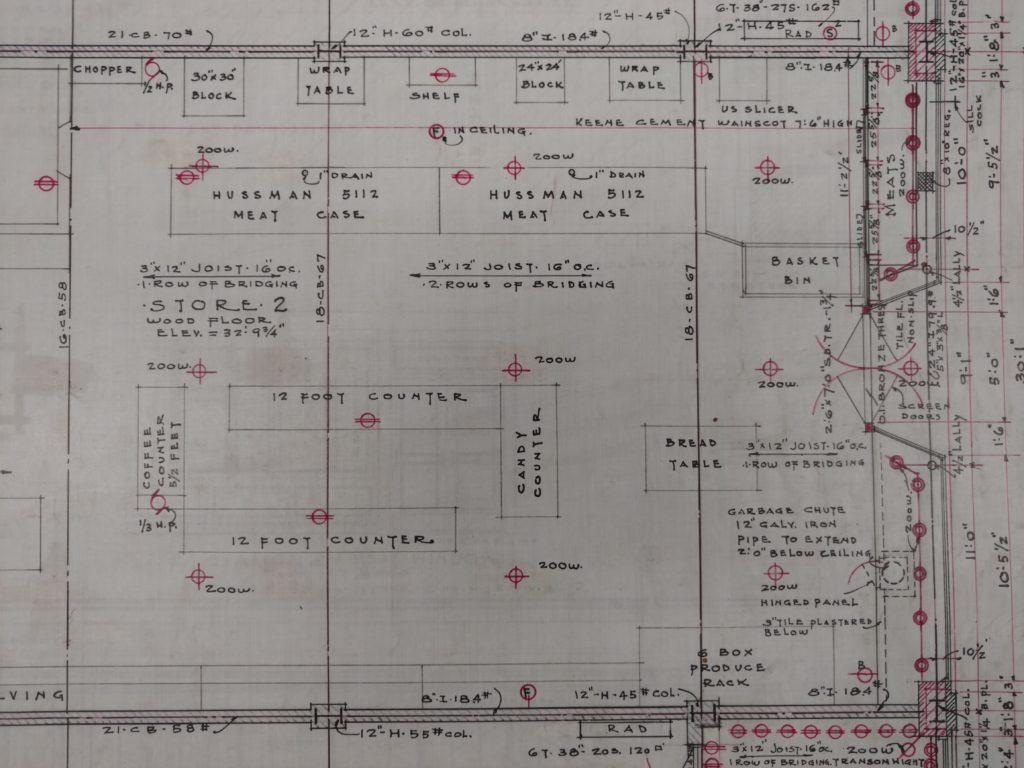 According to the Davenport city directories for 1931 and 1932, Renwick tenants contemporary with the Great A&P included Janet Frocks at #110 and National Chain Store, Inc., a millner’s, at #112.

The south side of 2nd Street was developed by the East Second Street Company (1929-1960), established in September, 1929 by George, Benjamin, and Edward Putnam, trustees of another prominent Davenport family’s estate. The RSSC Center is the fortunate custodian of the Company’s papers (DPL Archives and Manuscript Collection #2012-23).

This photograph of 119-121 2nd Street accompanied a September 1932 letter from Edward K. Putnam to the Kline Brothers’ Company of New York City. In hopes of finding a tenant in the recipient, Putnam asked: “When a retail chain can secure a location where its line exactly fits, which is in the path of of growth and at a reasonable rental, is it not time to grasp the opportunity?” 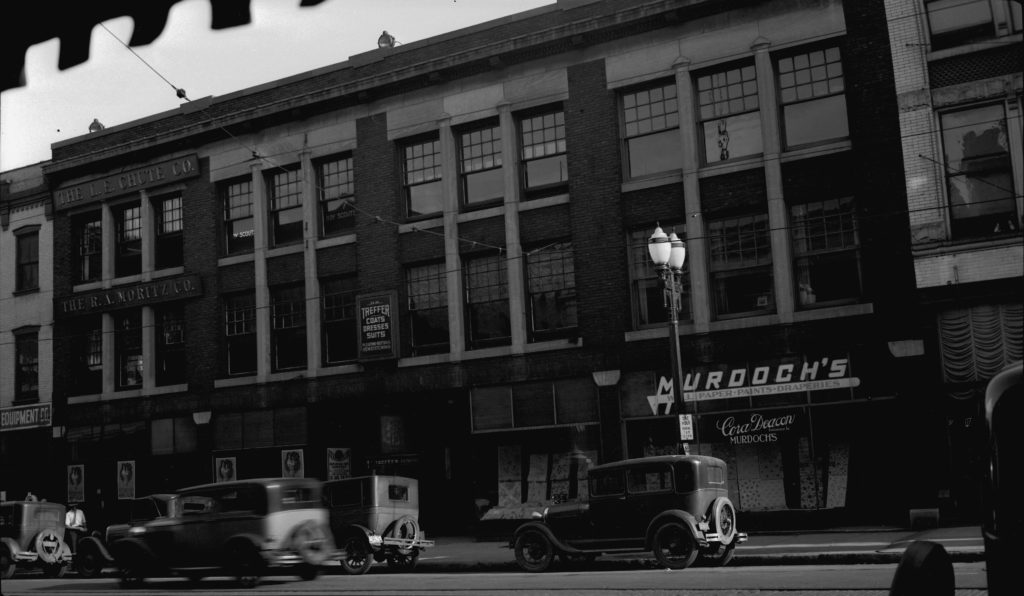 Although they did not succeed in attracting the Kline Co. to Davenport, the Putnams found other commercial renters for the south block, including the Huebotter Furniture Company: 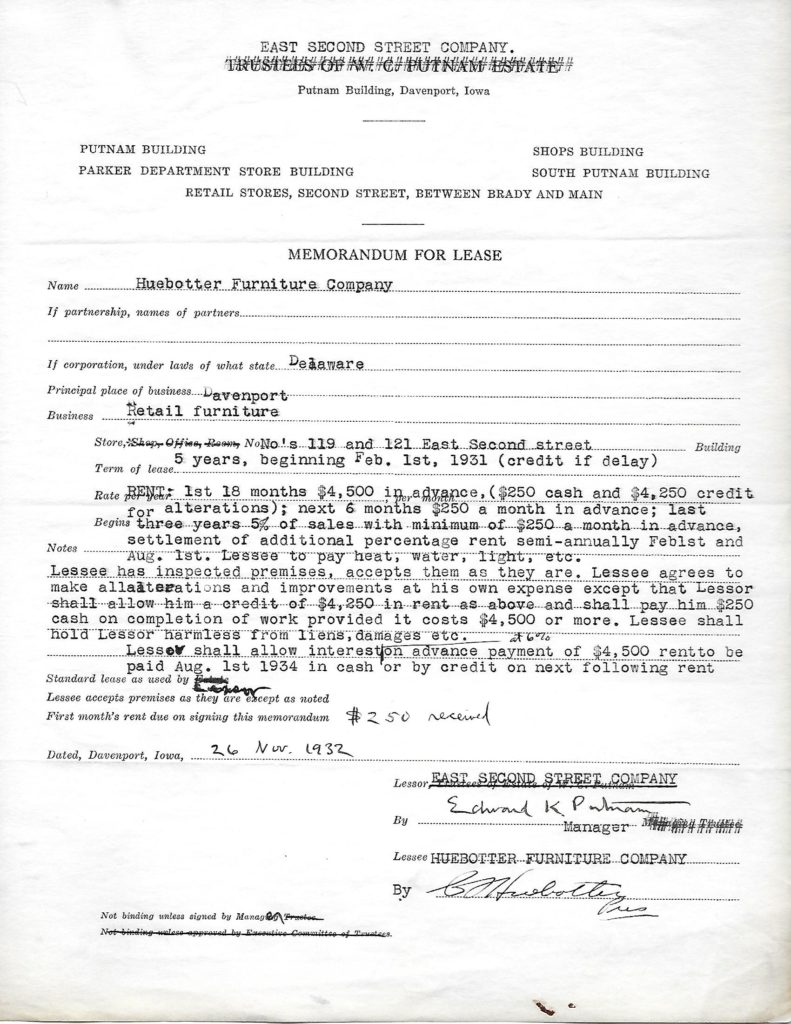 These two photographs of East Second Street from our image collections can be found online in the the Upper Mississippi Valley Digital Image Archive, a database created by the Davenport Public Library in partnership with other Quad-Cities area repositories for historical materials. The first shows the Sears building still under construction, the empty lot awaiting Renwick’s second building, and the as-yet undeveloped south side of the street; the second shows both Sears and Huebotter’s up and running, as well as the absence of streetcars. 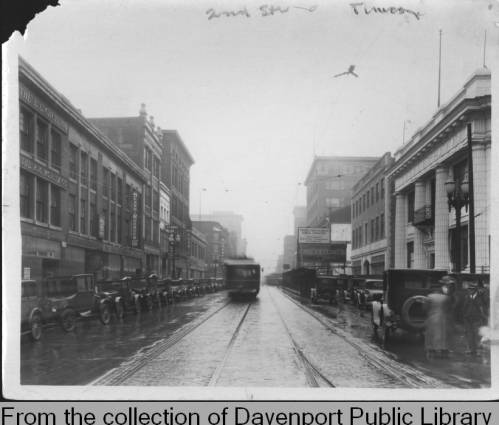 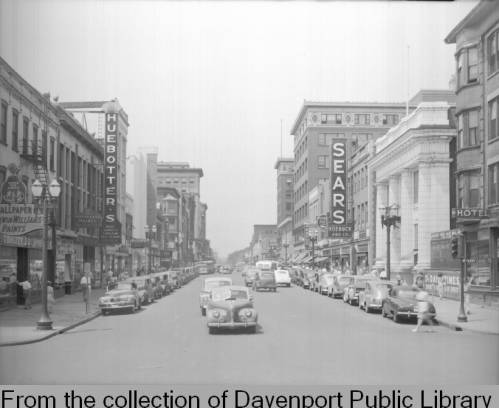 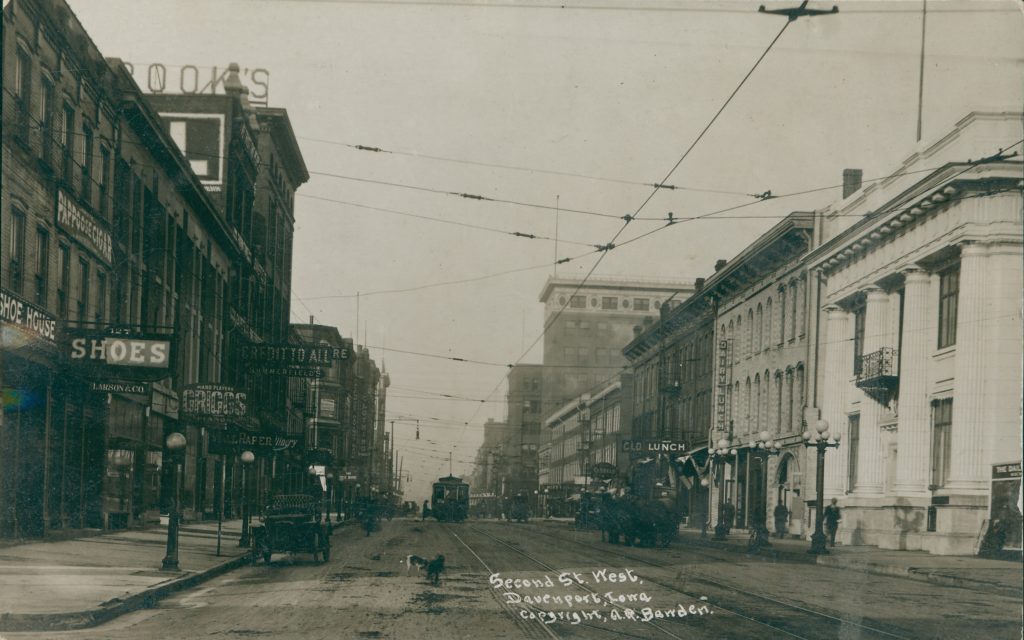 Share with us your memories of shopping on East Second Street in the comments!

(1) A series of articles on Helen Goodwin Renwick by Judy Wright in the Claremont Courier, July, 2002.